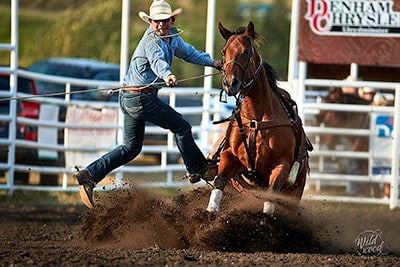 October 12, 2021 – After a year hiatus, the finalists have been decided, the back numbers have been assigned and preparations are underway as the countdown to CFR 47 continues. The six-performance event takes place November 3-7 at Red Deer’s Westerner Park Peavey Mart Centrium.

The coveted #1 back number that goes to the regular season’s highest money earner will be worn by Alliance, Alberta cowboy, Logan Spady. The second generation, two event hand (tie down roping and team roping heeler) heads into the CFR with $18,870 in money won and also sits on top of the High Point standings ahead of previous winners Morgan Grant and Riley Warren who sit at $2000 and $4000 back respectively.

Joining Spady heading for Red Deer as season leaders in Canadian Professional rodeo for 2021 are:

Defending Canadian Saddle Bronc Champion and two time World Champion, Zeke Thurston of Big Valley, Alta enters the CFR with $18,583 and a comfortable lead over the field with the bronc riding Hay brothers, Dawson and Logan, in second and third place in the standings.

Dynamic duo, Lacombe, Alta cowgirl, Justine Elliott, and her two-time CPRA Barrel Horse with the Most Heart, Blondy, enter the 2021 CFR as season leaders at $18,578 with a $3000 margin over second place cowgirl, veteran Lynette Brodoway.

For the third time in his stellar career, Nanton, Alta tie-down roper Logan Bird will carry the season leader honour into the CFR. The 2017 Champion did most of the damage this year on Peso, his nine year-old gelding. The 2021 Tie Down Roping Horse of the Year succeeded stablemate, TJ, another Bird-trained superstar who won that honour twice previously, including 2019.

2019 Bull Riding Season Leader and Champion, Edgar Durazo is back for more. The likeable Mexican-born talent rode all six bulls at CFR 46 and enters the CFR with $15,782 in season earnings and a narrow $1300 cushion over the 2018 title-holder, Wacey Finkbeiner, who sits in second spot.

One of the most dominant season performances in recent memory was that of team roping brothers Dillon and Dawson Graham. Header Dawson at 22 years-old and 20 year-old heeler, Dillon, both topped out at over $16,000 for the season and a solid $3000 head start on second place qualifiers, Logan Spady and Kash Bonnett.

And Maple Creek, Sask bull rider-team roper Jared Parsonage earned his first All Around title in 2021.