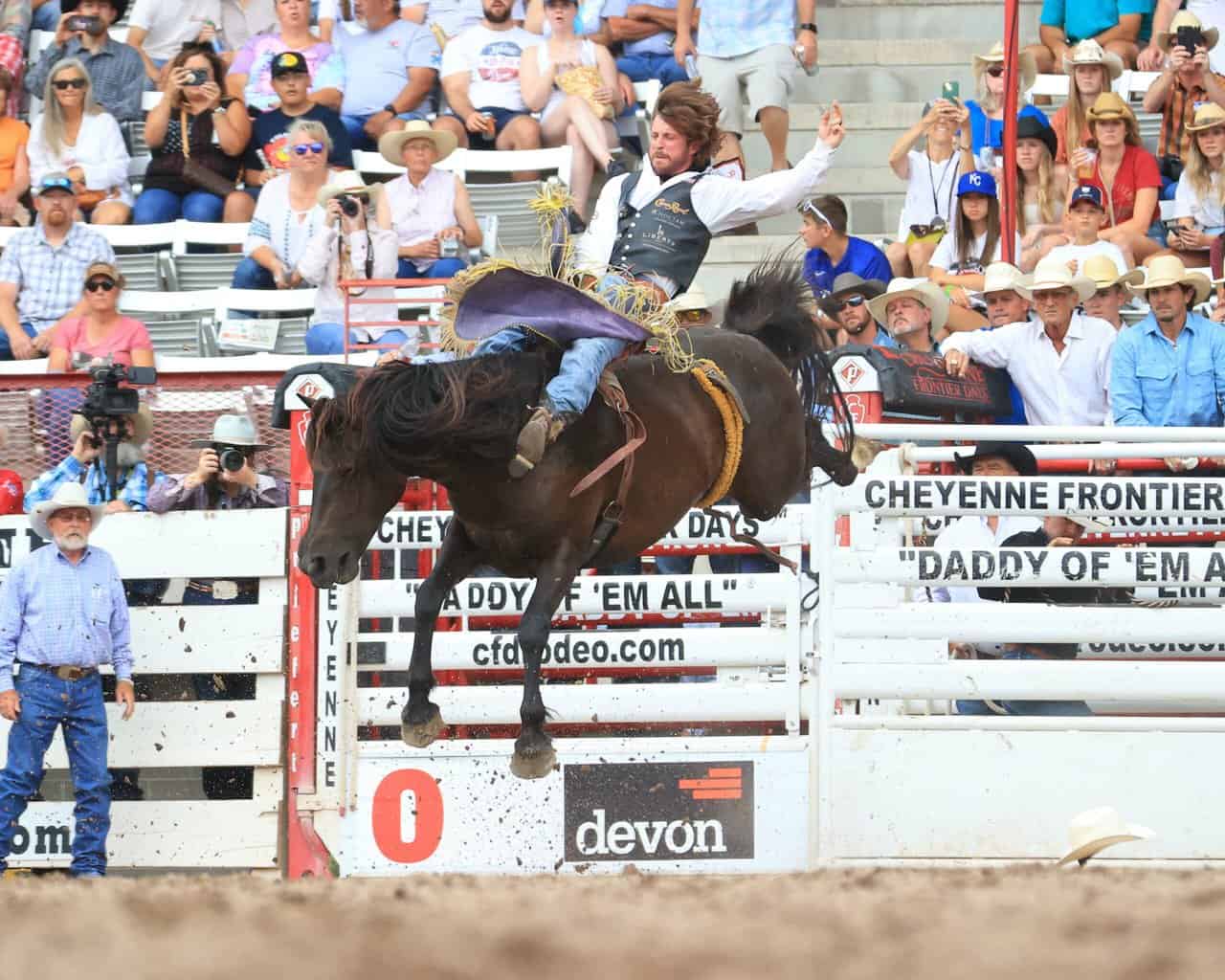 Tilden Hooper finished second at the 2021 edition of Cheyenne Frontier Days and is looking for redemption. He won Quarter Finals 1 at Frontier Park with an 88-point ride on Pete Carr Pro Rodeo’s horse Knight Mare. He advances to the Semifinals next weekend. PRCA photo by Jackie Jensen. 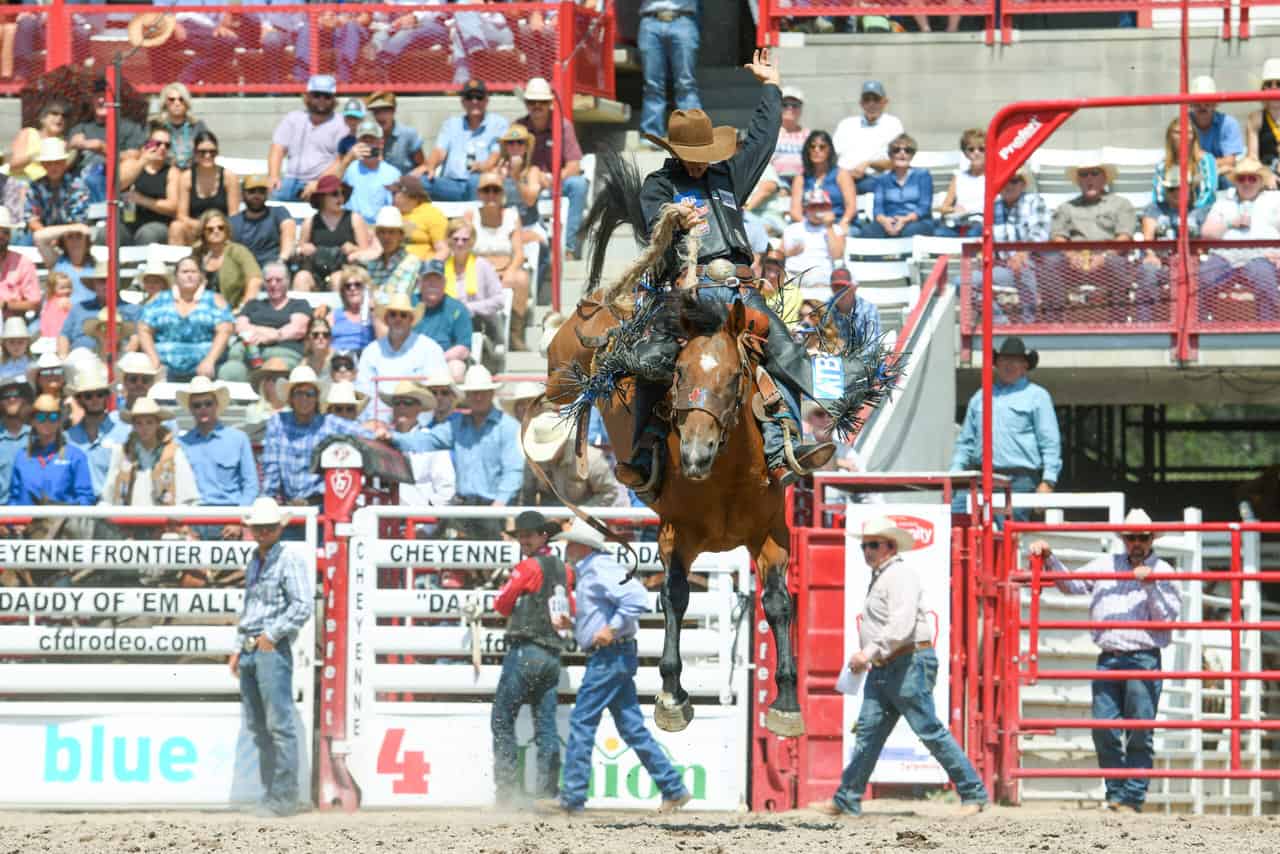 Two-time world champion saddle bronc rider Zeke Thurston won Quarter Finals 1 at Cheyenne Frontier Days with an 87-point ride on Andrew Rodeo’s Cracker Jack. He will advance to next weekend’s Semifinals at the “Daddy of ‘em All.” CFD photo by Steven Girt.

Two-time world champion saddle bronc rider Zeke Thurston of Big Valley, Alberta, Canada, is another veteran cowboy looking for his first CFD championship. Like Hooper, his quest is off to a good start after Thurston won Saturday’s Quarter Finals. He scored 87 points on Andrews Rodeo’s horse Cracker Jack to win the day by 3.5 points. 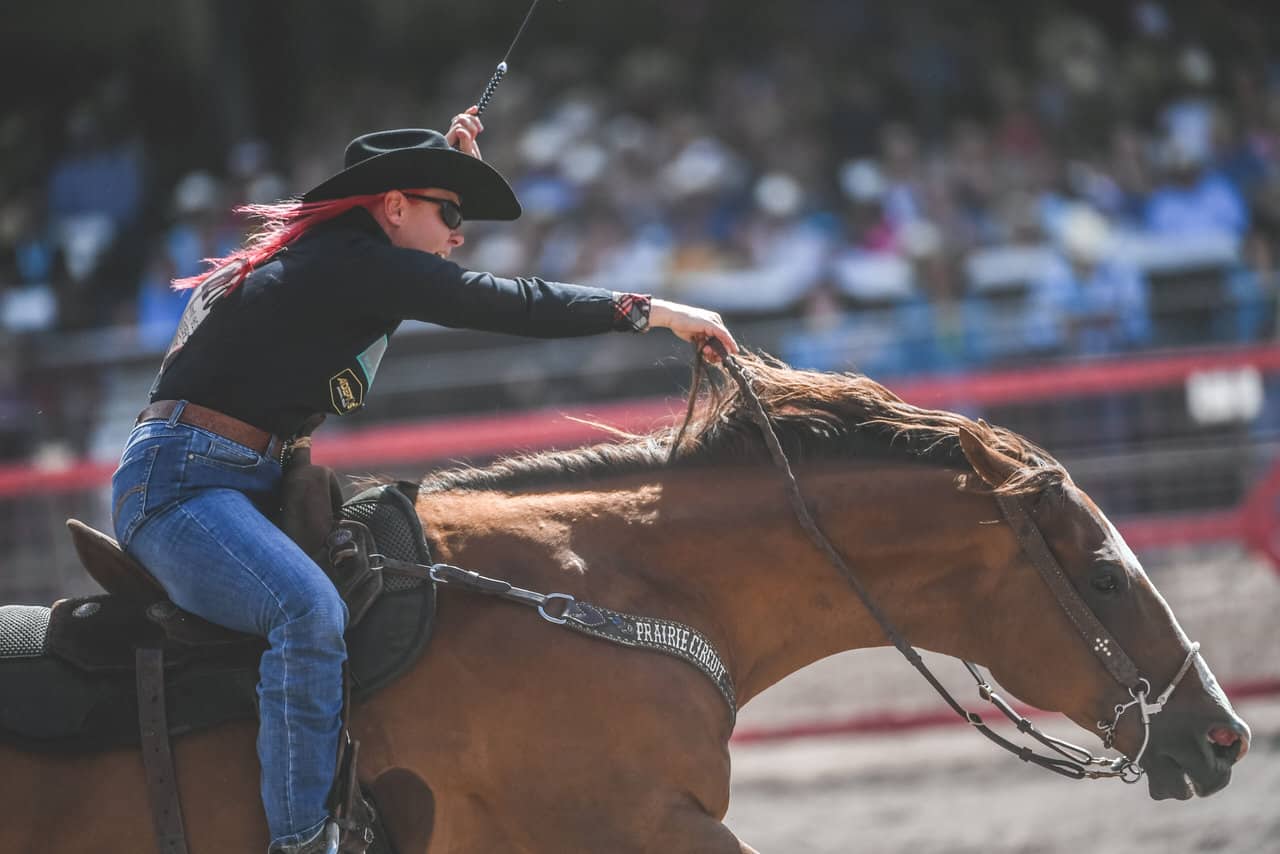 Leslie Smalygo kicked off the barrel racing Saturday at Cheyenne Frontier Days by winning Quarter Finals 1 with a 17.38 on her horse Justaheartbeattafame, nicknamed “Gus.” She will be advancing to next weekend’s Semifinals. PRCA photo by Click Thompson.

Oklahoma cowgirl Leslie Smalygo is having her best season in pro rodeo this year. She is ranked 15th in the world standings and seeking her first trip to the WNFR in barrel racing. Riding her 12-year-old sorrel horse named Justaheartbeattafame that she calls Gus, she bested 11 other women with a time of 17.38 seconds. That guaranteed her a spot in the Semifinals.

Smalygo won nearly $14,000 over the July 4 “Cowboy Christmas” run of rodeos. Her success this season has her friends telling her she’s “on fire.” That prompted the barrel racer to dye her hair the colors of fire – mixing pink, orange and red with her blonde locks.

Bull riders at the “Daddy of ‘em All” compete on consecutive days and have two opportunities to advance to the Semifinals. The same 18 bull riders will return to compete tomorrow.

The following are unofficial results from Quarter Finals 1 at the Cheyenne Frontier Days Rodeo on Saturday, July 23. Payoff subject to change.