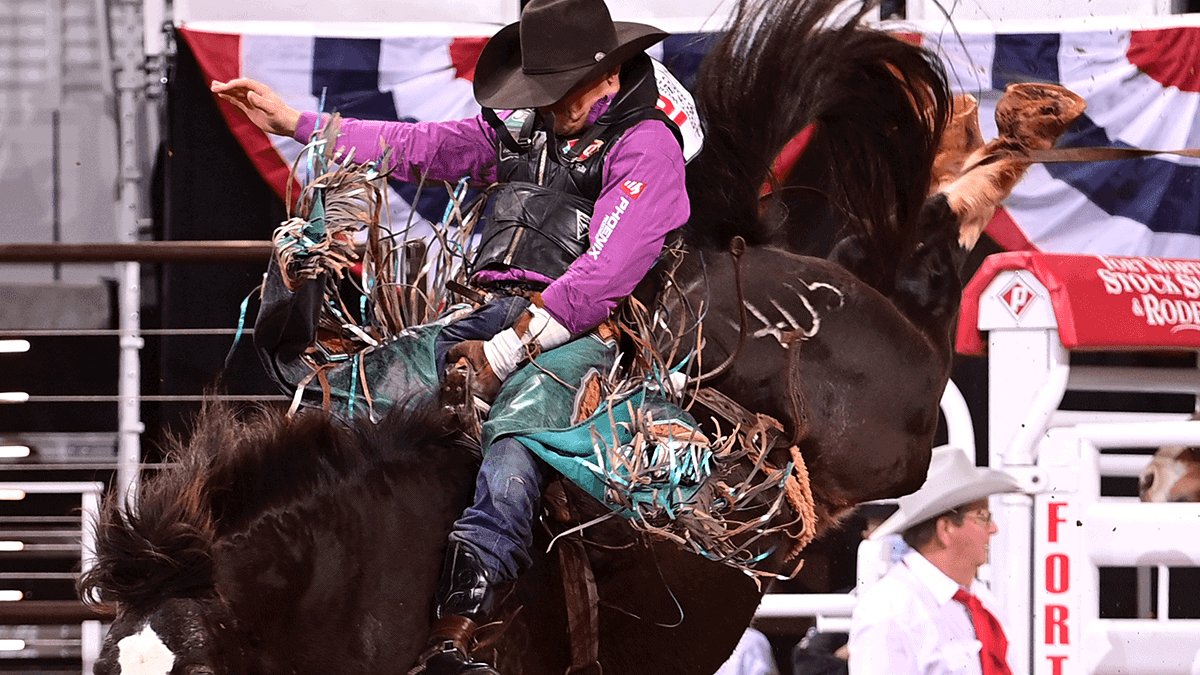 FORT WORTH, Texas  — The third set of competitors finished their second round of competition in the Fort Worth Stock Show & Rodeo’s (FWSSR) Pro Rodeo Tournament with two entrants in each of the eight disciplines advancing to the semifinals on February 3-4.

The winning breakaway roper again took home more than $100 per 1/10 of a second. The reigning world champion, Sawyer Gilbert of Buffalo, South Dakota, stopped the clock in 1.7 seconds – the fastest time of the rodeo thus far – and won $1,760. She and Tuesday’s winner, Texan Madison Outhier, move on to the semifinals.

Fifty-six of the top rodeo athletes in North America compete in each of eight events for more than $1.1 million dollars prize money in Fort Worth.

Seven groups of eight athletes per event compete in consecutive rodeo performances in the tournament. The top two money winners from each group qualify for one of the semifinal rounds. 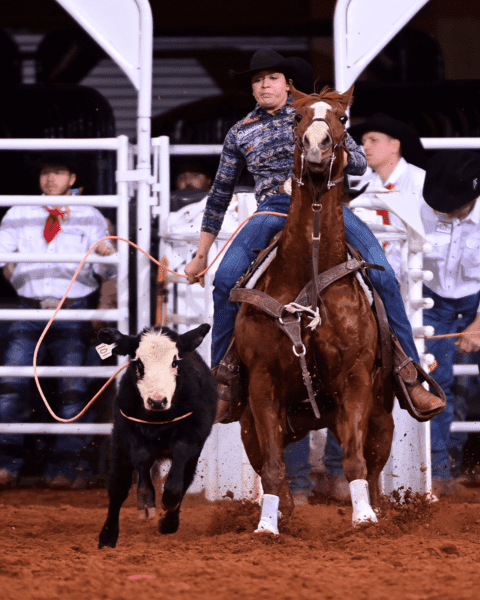 Sawyer Gilbert won the world title at the National Finals Breakaway Roping last January and is keeping her winning ways going at the Fort Worth Stock Show & Rodeo. Gilbert from Buffalo, South Dakota, stopped the clock in 1.7 seconds in Dickies Arena on Wednesday night for the win. FWSSR photo by James Phifer.

The top two money winners of that second-chance wild card competition also move on to the semifinals. Then, the top four from each semifinal advance to the finals on Saturday, February 5 when the champions will be crowned. 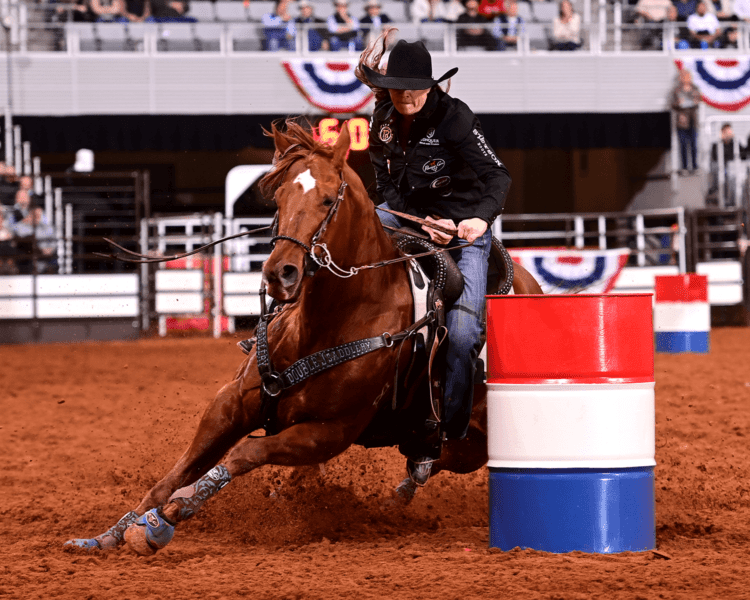 Brittany Pozzi Tonozzi was the fastest barrel racer at the Fort Worth Stock Show & Rodeo on Wednesday. Tonozzi, of Lampasas, Texas, stopped the clock in 16.58 seconds to win the second round. She will advance to the wild card round and return here to compete in one week. FWSSR photo by James Phifer.

Two-time world champion barrel racer Brittany Pozzi Tonozzi just won the championship at the National Western Stock Show & Rodeo in Denver. She finished out of the money on Tuesday in Fort Worth, but she and her mare Babe on the Chase (Birdie) ran the cloverleaf pattern in 16.58 seconds to win the second round. She has competed at the Fort Worth rodeo for 18 years and won the championship here once. She says she’d love to win here again, but her path to the tournament win has an extra step. She finished third in money won in her set and will have to win first or second the wild card round on February 2 to get to the semifinals.

Kincade Henry, a 20-year-old from Mount Pleasant, stopped the clock in the second-fastest time of the rodeo – 7.8 seconds to win the tie-down roping and advance to the semifinals. Only two bull riders made the eight-second ride on Tuesday. California’s Aaron Williams and New Mexico’s Scottie Knapp swapped the finish with Knapp’s 88-point ride on Andrews Rodeo Company’s bull Rapid Fire in the lead. They both advance to the semifinals having each won $4,400 in the qualifying rounds.

A new set of contestants, eight per event, compete Thursday night at 7:30 p.m. and Friday afternoon at 2 p.m. in Dickies Arena for their shot at the semifinals. 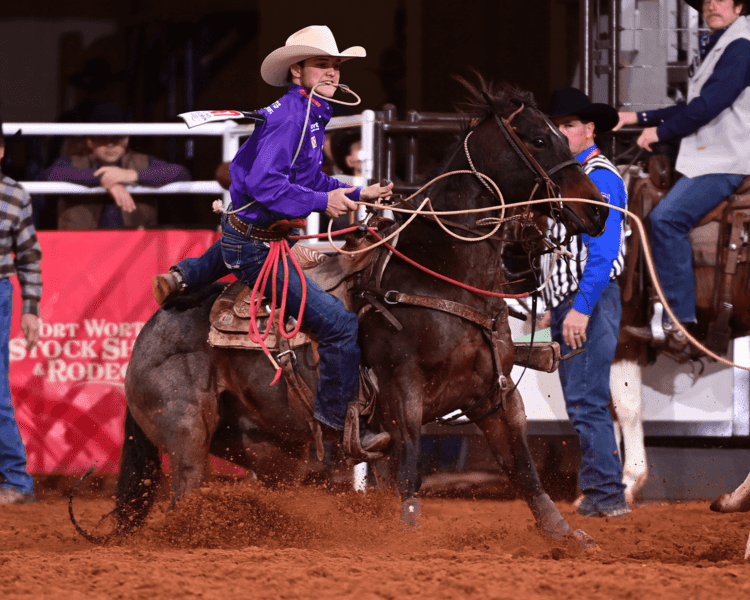 Kincade Henry of Mount Pleasant, Texas, had the fastest time of the tie-down roping in Bracket 3 at the Fort Worth Stock Show & Rodeo. Henry is ranked 22nd in the PRCA world standings and hoping to win championship of the FWSSR Pro Rodeo Tournament. He has won $2,200 and will advance to the Semifinals on Feb. 3. FWSSR photo by James Phifer

FORT WORTH, Texas — The following are unofficial results from the FWSSR ProRodeo Tournament at the Fort Worth Stock Show & Rodeo, Wednesday, January 26, 2022. (Qualifiers are based on tie-breaker rules.)

Semifinal Qualifiers: Kilgus and Edwards, and Richards and Buhler, $1,980 each. Wild Card Qualifiers: Tryan and Long, $1,760 each.