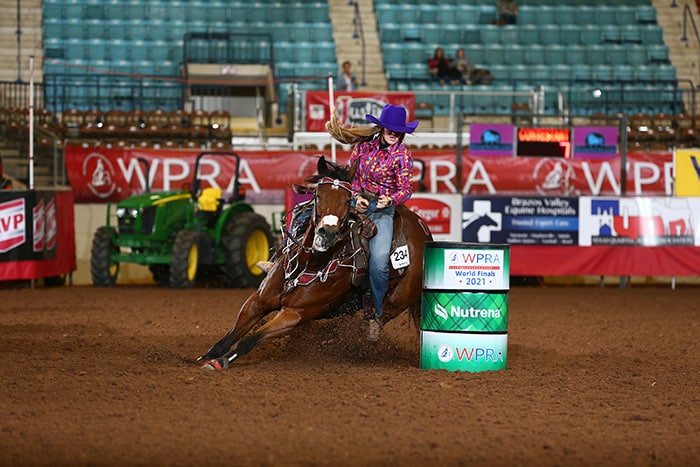 WACO, TEXAS – Barrel racing action took center stage on Friday morning, Nov. 12 at the WPRA World Finals in Waco, Texas, and a familiar name tops the leaderboard after the first round of the WPRA Card Holder Race.

Kylee Scribner and Firewater Cartel seem to have found a profitable home at the EXTRACO Event Center. During the 2020 WPRA World Finals, Scribner kicked off her rookie season in the WPRA by turning in the fastest time of the weekend winning the second round after stopping the clock in 15.345. She and BB returned in 2021 to kickoff her second year in the WPRA with the Rookie of the Year title in tow and they laid down the fastest time of the first round with a 15.640. They set the bar high and early as she was the seventh runner in the opening round.

Jodee Miller and Mr Repete Pete would come the closest to Scribner at run No. 31 with a 15.744 followed by former NFR qualifier and 2015 WPRA Rookie of the Year Jackie Ganter aboard Smokn Lane with a 15.799 at run No. 41.

Scribner added a cool $2,390 to her 2022 WPRA World Standings and is looking to add more before the weekend is over. The second round is scheduled for Saturday, November 13 at 9:30 a.m.

While Scribner was making headlines in the card holder race, Mindy Holloway was making her own noise in the Permit Only race. Holloway and Heavens Got Credit turned in the fast time in the first round stopping the clock in 15.998 seconds. They knocked Suade Furr and Stackin Bills out of the top spot. Furr was contestant No. 80 and stopped the clock in 16.103 and Holloway was No. 86 so it was short lived for Furr. However, both made a huge step in filling their permit collecting $981 and $841, respectively. Rounding out the top 3 was Kaycee Killingsworth and Firewarter Ta Party with a 16.199. Killingsworth was No. 58 and held the lead until Furr ran at No. 80. Second round action of the Permit Only race will run at 8 a.m. CT on Saturday.

All barrel racing action can be viewed live at www.goldbucklemedia.net.

Tonight the third round of roping will be contested and will be streamed live on Wrangler Network.