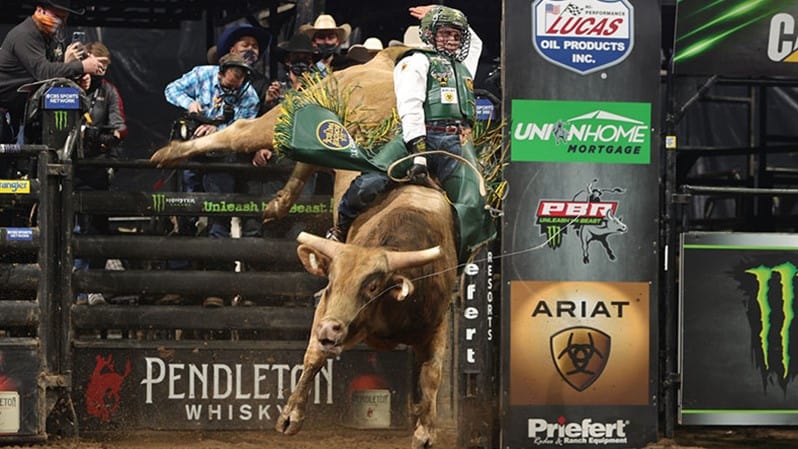 PUEBLO, Colo. – PBR Sport Performance Executive Director Antwon Burton has spent plenty of the past five months working with Andrew Alvidrez as the 24-year-old worked his way back from a broken neck that ended his 2020 season.

Whether it was training virtually over FaceTime or in-person in Pueblo, Colorado, multiple times, Burton has seen Alvidrez’s commitment up-close and personal, including just this past week.

Alvidrez is one of the fiercest athletes Burton has ever trained, and Burton says Alvidrez is similar to a prizefighter.

A post shared by PBR | NEXT LEVEL PERFORMANCE (@pbr_spc)

“Alvidrez is the Mike Tyson of bull riding,” Burton told PBR.com earlier this year. “Not in a bad way, but he attacks a process of working out. He attacks the process of the mental game, and when you see him ride, it is almost like he is in a fight that he refuses to lose.”

Alvidrez’s desire to come back stronger than ever in 2021 was on full display on Saturday night, with the Seminole, Texas native making his season debut at the PBR Caterpillar Classic in Kansas City.

The second-year premier series pro rode Charmer for 85 points to finish Round 1 in fifth place, and he will enter Championship Sunday in contention for his first career victory.

“I don’t know if it was strength,” Alvidrez told CBS Sports Network’s Kate Harrison. “It was just resilience. I was injured for five, six months. I am here to take what is mine. I am glad to be back.”

Alvidrez was amidst the best season of his career last year and was poised to qualify for his first PBR World Finals before he broke his C-7 vertebrae on Oct. 10 when Oreo bucked him off in 3.71 seconds in Tulsa, Oklahoma. He was sitting fourth in the 2020 Rookie of the Year race at the time of his injury. He made a splash in his debut in Little Rock, Arkansas, with a second-place finish, and he would finish runner-up again in September in Billings, Montana.

Alvidrez still finished the 2020 season ranked 26th in the final world standings. The 2018 Touring Pro Division champion went 9-for-33 on the Unleash The Beast.

Based on his Top 30 finish in the 2020 standings, Alvidrez will have four more injury exemptions following this weekend to begin the 2021 season as he tries to work his way back into the Top 30.

2002 World Finals event winner and CBS Sports Network commentator J.W. Hart told Craig Hummer on this weekend’s broadcast that Alvidrez is one of the riders he was excited to see come back healthy this season.

“With Jose (Vitor Leme) and Jess (Lockwood) being on and off, and making their comebacks, and Chase Outlaw making his comeback, a lot of people forgot about Alvidrez,” Hart said. “This is one of the guys I was excited to see get to go this full season just because of the sheer grit and determination he put on the field last season. He is maturing. He is getting stronger. He is getting more confidence in himself.”

Leme won Round 1 with 90 points on Knee Deep. Outlaw was bucked off by Bread Basket in 2.28 seconds.

There were 10 qualified rides in Round 1.

Alvidrez explained during exclusive PBR Virtual Experiences panel discussion about the Snapchat docuseries “Life By The Horns” on March 1 that mental conditioning is a big part of his training regimen.

“Everything that is going into my training is mental conditioning,” Alvidrez said. “Just like you have calloused hands whenever you are working outside, you have to callous your mind. You’ve got to do something every day that you don’t want to do. Because when you get in a tough predicament in bull riding, you are never in the spot you want to be, so you have to train your mind to say, ‘You know what, I am not in the spot I want to be, but I am going to be what I want to be.’ That is how you get rid of the doubt. Preparation. Training. Mental conditioning is a must.”

Many people believe Alvidrez is always focused on “bulking up” because of his background as a Texas High School Powerlifting Association state champion, but he explained that is far from the truth.

“A lot of people assume, ‘Oh Andrew, you are in there working out (to get big),’” Alvidrez said. “My whole purpose of training is not to get stronger. Of course, that is going to come, but I am preparing to battle the beast. That is what we are all doing. Back in medieval times, people would get into gladiator arenas, and they would fight lions, animals, each other. They would prepare their body for war. And that is how I like to view it. We are preparing for war, so why not push your body to the full limit? Because when you get in that box, you are the only one in there that is going to help yourself, so why not prepare yourself for the fullest.”