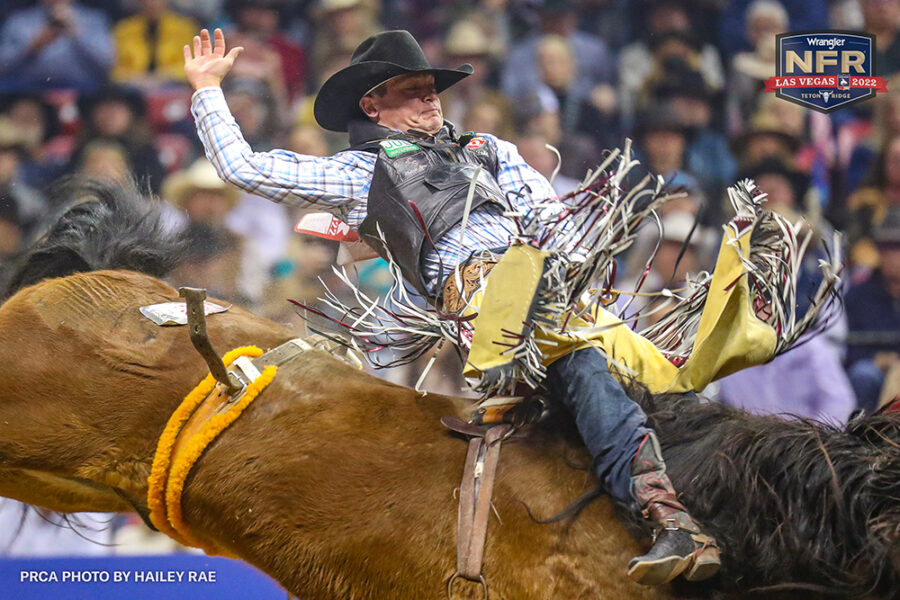 Tanner Aus rides J Bar J Rodeo’s Straight Stick for 88 points to finish second in Tuesday’s sixth round of the Wrangler National Finals Rodeo. He has earned at least a share of second place twice so far.
(PRCA PHOTO BY HAILEY RAE)

On Night 4, he made a bigger mistake and suffered a no-score, virtually taking him out of any shot for this year’s world championship. It was disappointing, but that’s what happens in rodeo. It’s definitely a roller coaster, and it gets especially dicey during the richest rodeo in the world.

He stayed focused, though, and returned to the NFR’s pay window with an 88-point ride on J Bar J Rodeo’s Straight Stick to finish second in Tuesday’s sixth go-round. It was worth $22,851, and it made him feel more at ease and gave him a quick boost of confidence.

“Even though I’m riding for round money, you get to wanting to thinking you want to let it all hang out, but the bottom line is one horse at a time,” said Aus of Granite Falls, Minnesota. “I’ve got to do what got me here; I’ve got to go back to the basics, stuff I learned when I was a kid. That is what gets you through any tough time in your riding, any slump. It always gets you through to get back to the basics.

Aus has placed just twice through six nights in Las Vegas. He tied for second place in Friday’s second round, so he’s made some serious cash in those two rides. He has pocketed just shy of $53,000 for his week so far and has four more nights to add to it. He is sixth in the world standings with $180,036.

“I really feel like I’ve been winning the draw,” he said. “I made a couple mistakes in Night 3 and Night 4. They were pretty costly, but I’m drawing good and I’m feeling good. I show up here, and I feel the pressure and feel like I’ve got to go out there and be 100 points every night. You have to get back to the basics.” .

Fundamentals are the main part of any athlete’s repertoire. They came in quite handy for Aus when he rode Straight Stick on Tuesday.

“That’s the first time I’ve been on him,” Aus said. “He feels so good. I didn’t quite finish him quite as strong as I would have liked. That might have been the difference between second place and first place in the round. (J Bar J’s owner) Sparky Dreesen is a good friend of mine; he used to rodeo with my dad, and now he has one of the best sets of bucking horses in the world. It was so much fun.”

This year’s NFR hasn’t gone quite as well as he had hoped, but that’s the roller coaster that is rodeo. A cowboy can be the champion one day and be bucked off the next. What matters most is what happens after the rides.

“It’s easy to hang your head when things aren’t going your way, but I’m so blessed to have the support system that I have,” Aus said. “My folks are here. I’ve got family in and out of town all week. My wife … she’s my rock. I don’t know where I’d be without her. “My kids are happy to see me when I get done no matter how it goes. It’s just a blessing. The highlight of my night, no matter what happens, is when I go upstairs and they see me, they come running; there’s nothing better than that.”