Mississippians Marcus Theriot and Cole Curry dominated Bracket 2 at the Fort Worth Stock Show & Rodeo’s ProRodeo Tournament. After winning the team roping in the first round on Sunday, they came back on Monday with this 6.0-second run which tied for first with Canadians Dawson and Dillon Graham. Theriot and Curry advanced to the Semi-Finals on February 2-3. FWSSR photo by James Phifer

“This rodeo is legendary,” Feild said. “To come here and have a horse like that —she’s amazing. She just bucks harder with every jump.”

Marcus Theriot of Lumberton, Mississippi, and his partner Cole Curry of Liberty, Mississippi, roped a berth in the Semi-Finals by dominating Bracket 2 of team roping. The duo won round one on Sunday with a 4.9-second run. On Monday night they tied with Canadian brothers Dawson and Dillon Graham for first in round 2.

Theriot was the last athlete to be named all-around cowboy here. He earned the honor in 2019, the last year the rodeo was held in Will Rogers Coliseum. Since the event moved to Dickies Arena, no individual cowboy has won money in more than one event, which means no all-around winner.

Joining the Mississippians in the Semi-Finals are Texans Casey Tew and Boogie Ray. Ray, a former NFR qualifier who doesn’t travel nationally much anymore, qualified to compete here by winning the Hood County Stampede Rodeo in Granbury last season. 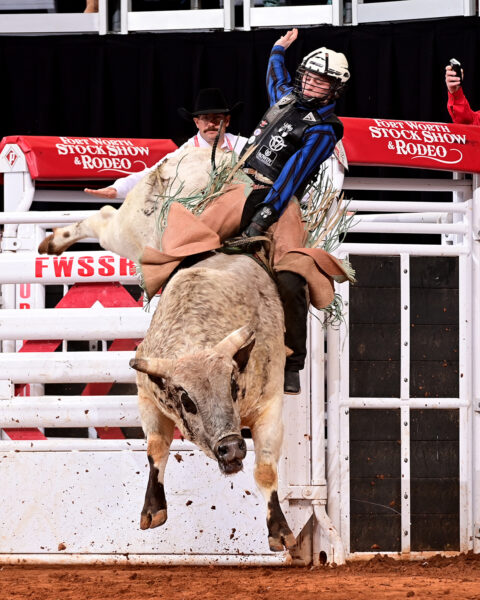 Jestyn Jax Woodward of Custer, South Dakota, scored 86.5 points on Pickett Pro Rodeo’s bull Up the Ante Monday at the Fort Worth Stock Show & Rodeo’s ProRodeo Tournament. Woodward made the only qualified ride, won $4,400 and advanced to the Semi-Finals on February 2-3. FWSSR photo by James Phifer.

For the second consecutive round of Bracket 2 only one bull rider made a qualified ride. This time Jestyn Jax Woodward of Custer, South Dakota, scored 86.5 points on Pickett Pro Rodeo’s bull Outlaw and won $4,400. He advanced to the Semi-finals along with Missouri’s Jack Gilmore who was the only successful rider on Sunday.

The FWSSR ProRodeo Tournament features 56 competitors (56 teams in team roping) in each event, divided into seven brackets of eight. Individuals qualify by finishing the 2022 season in the top 50 of the world championship standings or winning one of six qualifying rodeos in Texas.

Contestants in each bracket compete in two rounds of back-to-back action. The top two money earners per bracket in each event advance to one of two semi-finals while the third-highest money winner advances to the Wild Card round. Those finishing lower than third go to the non-qualifier pool. The highest remaining money earner in each event in the non-qualifier pool after all brackets are completed advances to the wild card round.

The FWSSR ProRodeo Tournament continues at 7:30 p.m. Tuesday with a new group of contestants competing in Bracket 3 at Dickies Arena. 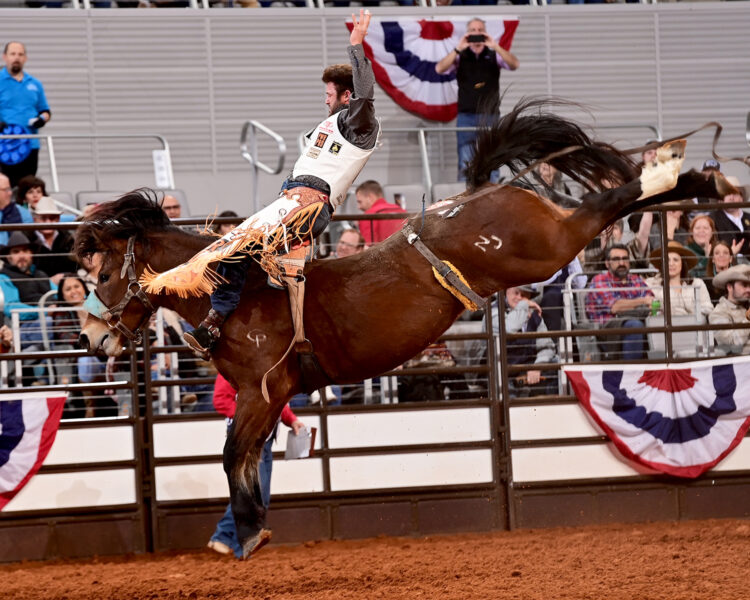 FORT WORTH, Texas – The following are unofficial results from the Fort Worth Stock Show & Rodeo’s Pro Rodeo Tournament, January 23, 2023.

(Qualifiers are based on tie-breaker rules.)