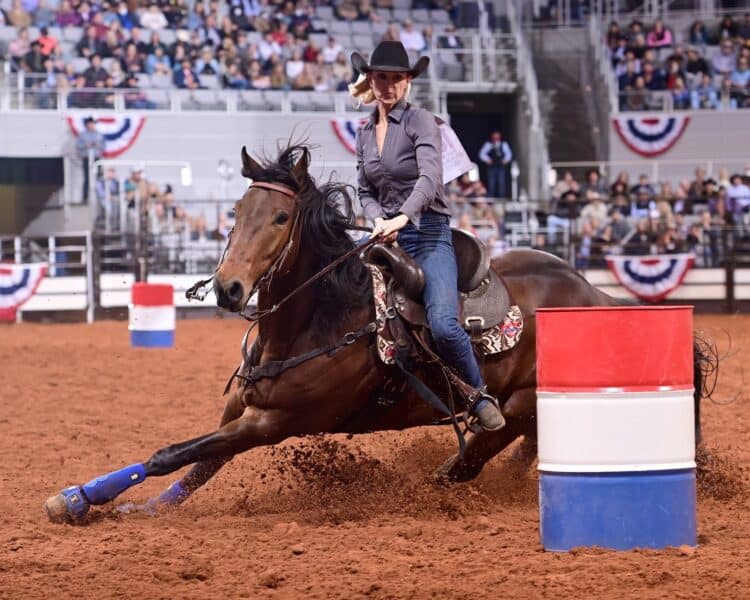 Wenda Johnson set a new arena record in the barrel racing on Monday at the Fort Worth Stock Show & Rodeo. Johnson, from Pawhuska, Oklahoma rode Macgyver Moonflash around the cloverleaf pattern in 16.19 seconds to beat the record set earlier this year by world champion Jordon Briggs at 16.25. FWSSR photo by James Phifer.

FORT WORTH, Texas — Fast times are the expected in the barrel racing at the Fort Worth Stock Show & Rodeo (FWSSR)

Fans watched last week as world champion Jordon Briggs and her great horse “Rollo,” had the fastest time recorded in Dickies Arena at 16.25 seconds. That record only stood for two performances.

On Monday, Wenda Johnson, from Pawhuska, Oklahoma stopped the clock in 16.17 seconds. Johnsons was riding Macgyver Moonflash “Mac,” one of two horses that she rode at the Wrangler National Finals Rodeo. Johnson’s trip to Las Vegas to compete at rodeo’s championships last December was her first. A big win here could jumpstart her 2022 season to get her back there again next December. 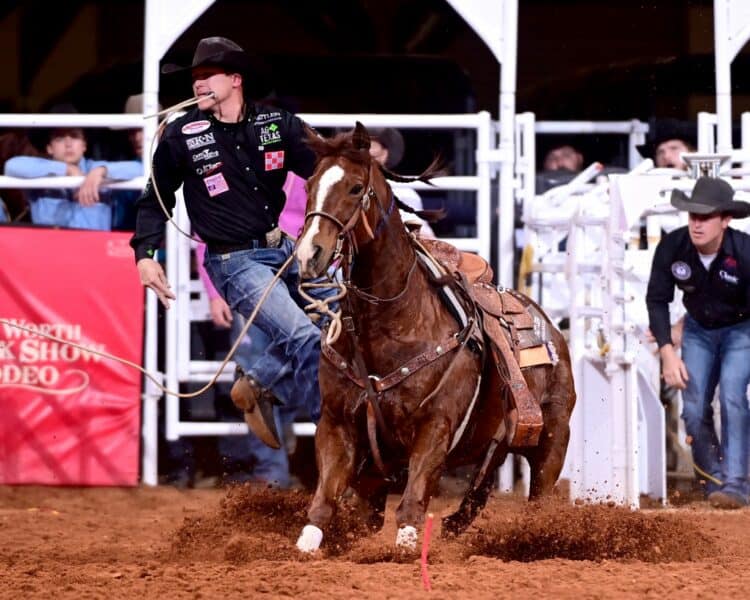 Marty Yates won the last Fort Worth Stock Show Rodeo tie-down roping title that was available in the Will Rogers Memorial Coliseum. That was in 2019 before the legendary rodeo moved into its current location of Dickies Arena. Yates, who lives at Stephenville, Texas, won round one of bracket 7 on Monday night with a 7.7-second run. FWSSR photo by James Phifer.

Marty Yates won the tie-down roping here in 2019, the last time the rodeo was held in the historic Will Rogers Coliseum. The Stephenville, Texas, resident is known for fast times and his performance here was no exception. Yates stopped the clock in 7.7 seconds on Monday night for the win. If he has another fast time on Tuesday, he will be advancing to the semifinals and have a chance at a second FWSSR buckle. 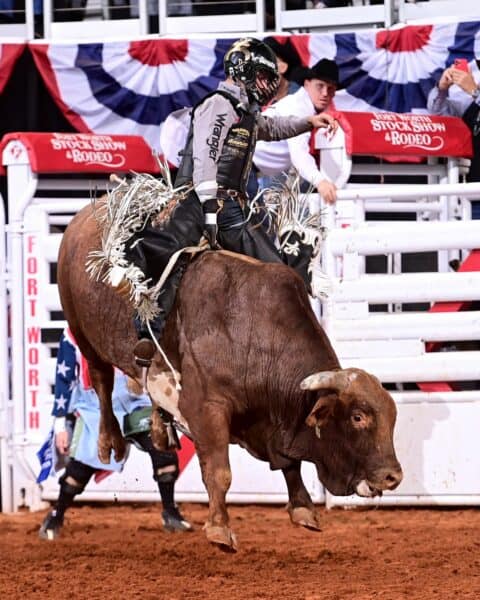 Sage Kimzey was one of two successful bull riders at the Fort Worth Stock Show & Rodeo on Monday. The Salado, Texas, resident scored 80 points on Rafter G Rodeo bull named Road to Nowhere. He will ride again on Tuesday, but because of his success on Monday will be advancing to the semifinals. FWSSR photo by James Phifer.

This was Sage Steele Kimzey’s first rodeo of the 2022 year, the first as a dad and the first to collect money at in the bull riding. He was one of two successful riders and had the top score of 80 points on Rafter G Rodeo’s Road to Nowhere. That garnered the Salado, Texas, resident $2,420. He and his wife, Alexis, just welcomed their first child into their family, a boy, Steele Randall Kimzey. Kimzey is the reigning world champion bull rider in the Professional Rodeo Cowboys Association. His latest title is his seventh and he is closing in on the record for titles in that event set by Don Gay.

The top four from each semifinal meet in the championship round Saturday night at 7:30.

FORT WORTH, Texas — The following are unofficial results from the FWSSR ProRodeo Tournament at the Fort Worth Stock Show & Rodeo, Monday, January 31, 2022.