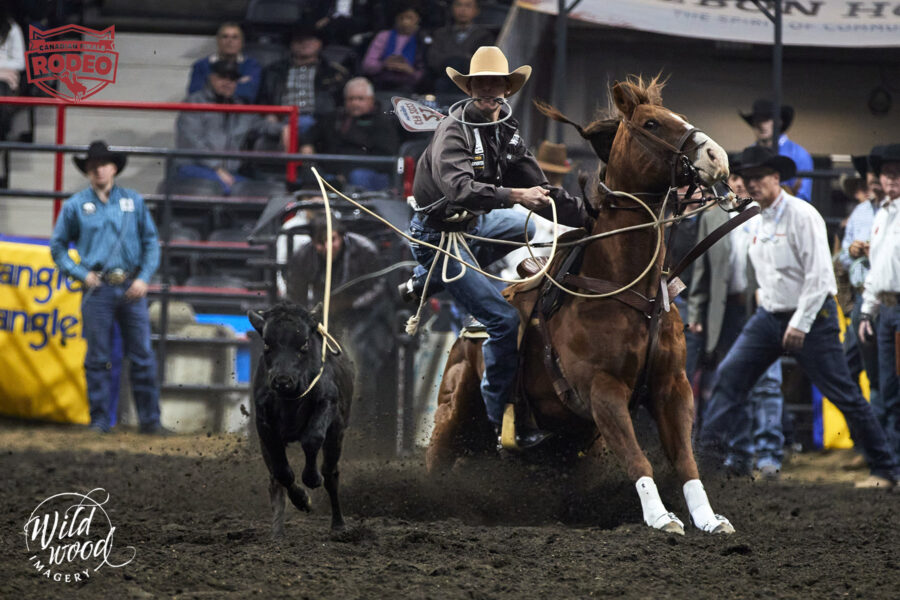 Rookie jitters were clearly not a factor as Stettler, Alberta tie down roper, Beau Cooper, won the opening round at CFR ’48 with a blistering 7.7 second run.

The 21-year-old noted that he benefited from being just 45 minutes from home, “I had some school buddies as well as family here tonight. I had some nerves but you have to control them and make the best of it. I couldn’t wait to run that first calf.”

In the ladies barrel racing, 18 year old Taylor Manning was off to a strong start. The five time CFR qualifier enjoyed the round one win with a 13.70 second run.

Other round winners included team ropers Riley Wilson and Grady Quam; the duo posted a 4.7 for the win. For the veteran, Wilson, it was his first go-round win since 2010.

Travelling partners, Jared Parsonage and Jordan Hansen, split the round in the bull riding with identical 86 point rides. Both cowboys are former Canadian Champions and were the only two successful riders on the night. Hansen was aboard Vold Rodeo’s 54 Catfish while Parsonage made the eight second buzzer on the back of another Vold bull, 539 Jayded.

Round two of CFR ’48 gets underway at 6 pm Thursday evening at the Peavey Mart Centrium, Westerner Park in Red Deer.

The Canadian Professional Rodeo Association(CPRA) with headquarters in Airdrie, Alberta is the official sanctioning body for Professional Rodeo in Canada. The CPRA approves 55 events annually with a total payout exceeding $5.7 million. The organization oversees the SMS Equipment Pro Tour Finals each fall in Armstrong, BC, holds their premiere event – the Canadian Finals Rodeo (CFR) – at Westerner Park in Red Deer, AB November 2-6 and endorses the Maple Leaf Circuit Finals as part of Canadian Western Agribition in Regina, SK. Follow the CPRA on Twitter and Instagram @prorodeocanadaofficial, ‘Like’ Canadian Professional Rodeo Association on Facebook or online at RodeoCanada.com.