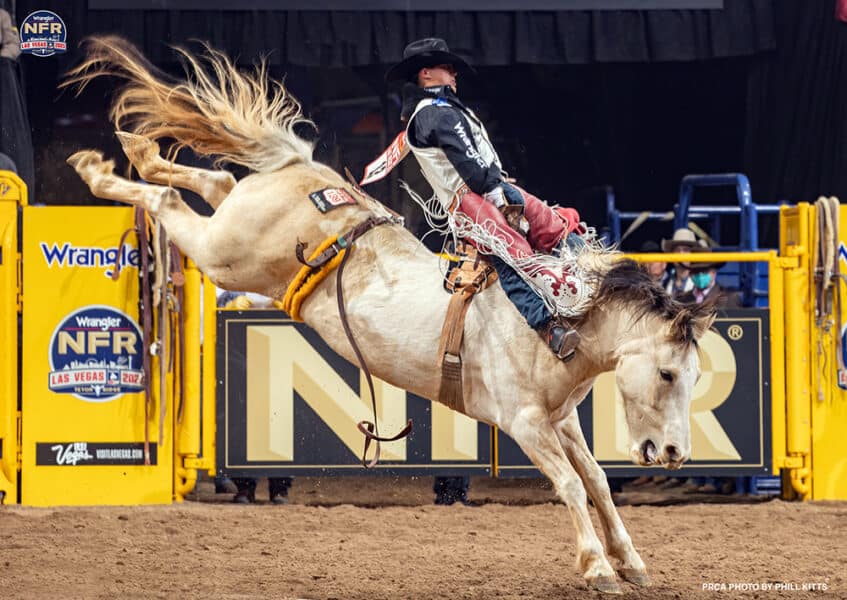 Clayton Biglow rides Frontier Rodeo’s Painted Smoke for 86.5 points to finish in a tie for third place in Friday’s ninth round of the Wrangler National Finals Rodeo.
(PRCA PRORODEO PHOTO BY PHILLIP KITTS)

Clayton Biglow can testify to that. He’s struggled at his sixth straight NFR, and he’s not afraid to admit it. He earned his biggest paycheck of his week after an 86.5-point ride on Frontier Rodeo’s Painted Smoke to finish in a tie for third place in Friday’s ninth go-round, pocketing $13,716.

“It felt good to do that,” said Biglow, the 2019 world champion from Clements, California. “I’ve seen that horse a bunch. She’s a good one. I knew I had a good shot to win some money and had a good horse to make a good ride on.”

It was just the fourth time he’s placed, which isn’t the norm. Two years ago, he set records in winning the Montana Silversmiths gold buckle. But each year offers something different. It can take a bit of an attitude adjustment, and he may have received it when he bucked off Hi Lo Pro Rodeo’s Pretty Woman in Thursday’s eighth round.

“After I got bucked off, I realized I had nothing to lose,” he said. “I just need to go and have fun these last two rounds and leave it all on the table.

“I’m not riding to the best of my ability. There are so many factors that play the whole week. I just tried to forget everything that happened. I tried to have fun. The only thing I was worried about was having fun. I was not thinking about money or anything else. As long as you’re having fun, the rest will take care of itself.”

He has earned $43,456 so far and is seventh in the world standings with $185,460. He will close out his campaign during the final round of the NFR on Saturday night.

This 10-day championship isn’t for the weak. There are tremendous challenges that come with competing at this level. Contestants are matched with the horses they ride by a random draw, and Biglow hasn’t drawn quite as well as others. He’s also watched two cowboys, Kaycee Feild and Jess Pope, earn at least a share of seven go-round wins combined.

“I just stay as positive as I can,” Biglow said. “Things haven’t gone the way I planned; sometimes that’s just the way it is. You just have to roll with the punches and keep striving for greatness.

“When you’ve got Jess and Kaycee taking off with everything, you feel like you’ve got to win every round. You start putting that on yourself. The more weight you put on your shoulders, the harder it is. I was trying to make things happen.”

“Once I decided to have fun, I think that changed the way I thought and gives me a better chance to win,” he said. “I’m looking forward to (Saturday) night.”