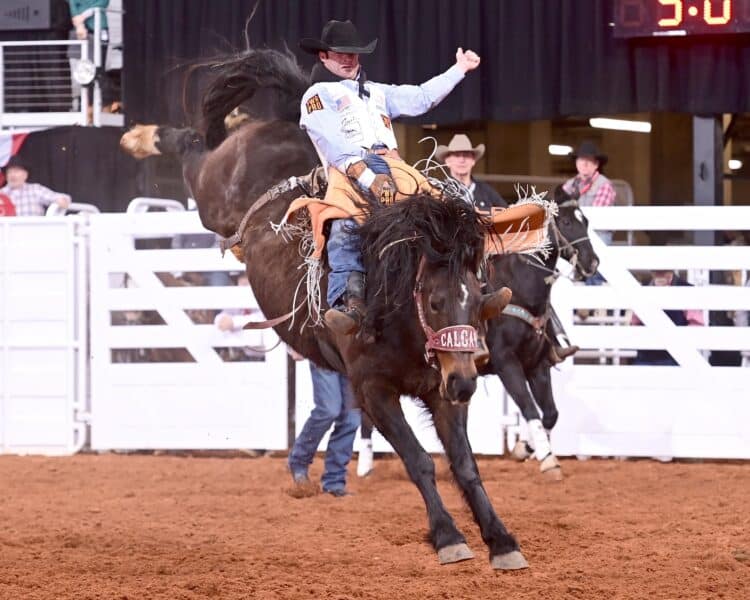 FORT WORTH, Texas — The Fort Worth Stock Show & Rodeo’s (FWSSR) ProRodeo Tournament has been filled with thrills and spills since it began January 21.

Sunday’s rodeo completed bracket 6 qualifying rounds. While most of the contestants won’t be back to compete in Dickies Arena this year, the ones that are advancing to the wildcard and semifinals rounds are already making plans.

He joined the Professional Rodeo Cowboys Association (PRCA) in 2007, has entered Fort Worth nearly every year since and has been successful many times. However, his second-place finish with an 85 in the first round on Saturday was the first check he has won in Dickies Arena.

Calgary Stampede’s bucking horses were also featured in the saddle bronc riding and this time they won the battle. Only two of the eight competitors rode for eight seconds to get a score. It was a fight for both, who are also from Canada.

Ben Andersen from Rocky Mountain House, Alberta rode Ambitious Bubbles for 72 points to win $2,420. K’s Thomson from Lundbreck, Alberta, marked 60 points, and even though it wasn’t a high score, it still netted him $1,980. These men also placed in the first round of their bracket and are advancing to the semi-finals.

Andrew Ward from Edmond, Oklahoma, and Buddy Hawkins II, from Columbus, Kansas, found themselves at the top of the leaderboard again on Sunday. They tied for the win in the first round, then got it outright Sunday afternoon with a time of 4.3 seconds. They each have collected $3,080 here. 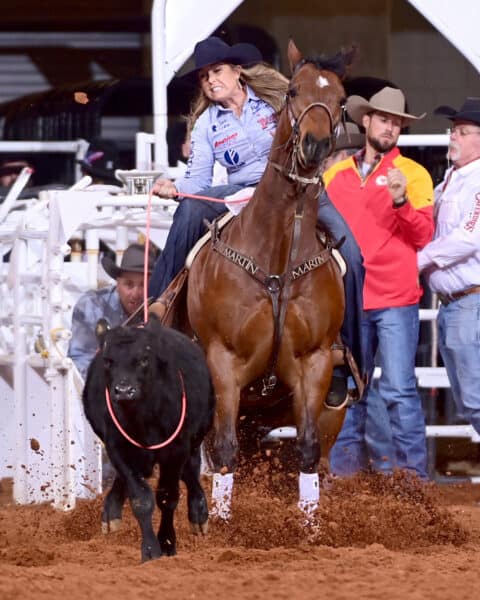 Veteran world champion breakaway roper Jackie Crawford of Stephenville, Texas, roped her calf in 1.8 seconds to win Sunday’s round at the Fort Worth Stock Show & Rodeo. Crawford, who has been instrumental in the growth her event in professional rodeo, advances to the semifinals with a fifty-fifty chance of roping in Saturday night’s championship finals. FWSSR photo by James Phifer

Breakaway roping at the Fort Worth Stock Show & Rodeo continues to be quite popular and when a world champion like Jackie Crawford backs into the box, the tension is palpable. Crawford earned a third-place check Saturday, then came back and won the round on Sunday with a time of 1.8 seconds . She has been behind the scenes working hard to get more recognition for breakaway ropers and have the event included in professional rodeo. Getting to rope in Dickies Arena and at other rodeos across the country has been a dream come true. Winning money and hopefully one of the traditional buckles that goes with a championship would be the best kind of payoff for all her efforts.

The seventh and final bracket of qualification rounds, showcasing the last eight of 56 contestants in each discipline, will be Monday and Tuesday night at 7:30 p.m. The top two money winners from each bracket return for the semifinals on Thursday and Friday night.

The third-highest money winner in each bracket advances to Wild Card Wednesday. The other contestants from each bracket go into a non-qualifiers pool. When all brackets are finished, the highest money winner from the non-qualifiers pool also advances to the wild card round. After Wednesday night’s competition, the top two in each event advance to the semifinals.

The top four from each semifinal meet in the championship round Saturday night at 7:30.

FORT WORTH, Texas — The following are unofficial results from the FWSSR ProRodeo Tournament at the Fort Worth Stock Show & Rodeo, Sunday, January 30, 2022. (Qualifiers are based on tie-breaker rules.)