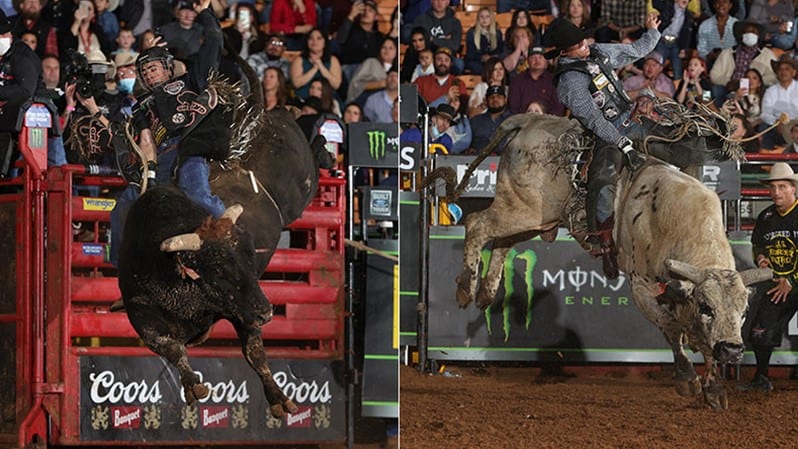 Just this past weekend, Chiseled picked up 47 points after Rafael Henrique dos Santos was called for a slap at the 2.52-second mark during the PBR Can-Am Invitational in Fort Worth, Texas.

Chiseled made his season debut two weeks earlier in Del Rio, Texas, with a 46.5-point bull score, and he now sits atop the YETI World Champion Bull standings with a 46.75-point average on two outs.

The 2021 YETI World Champion Bull will be the animal with the highest average bull score from their top eight regular-season outs and two outs at the PBR World Finals.

It is apparent Chiseled is primed for another run at the World Champion bull title after coming up just short a year ago. The soon-to-be 6-year-old bull was the frontrunner for the 2020 World Championship for the majority of the second half of the season before Smooth Operator snatched the title away from him at the 2020 World Finals with two 46-plus outs compared to Chiseled’s 45-plus performances.

In fact, Chiseled spent 16 event weeks in the No. 1 ranking compared to six for Smooth Operator last season.

Chiseled had a slim 0.03-point lead entering the World Finals over Smooth Operator, and he won not only the PBR’s regular-season bull title but was also named the PRCA’s Bull of the Year.

The 2020 World Championship Bull race was the closest title race on the bovine side since 2017, and 2021 may be even closer. Smooth Operator is looking for a three-peat, and newcomers Woopaa and Ridin Solo are ready to make a claim at the throne as well.

Let’s take a look back at the comparison between Chiseled and Smooth Operator last season.

The PBR Unleash The Beast has an off weekend coming up, but the series resumes on March 12-14 in Glendale, Arizona, with the PBR Built Ford Tough Invitational, presented by Cooper Tires. The first night of competition will be the conclusion of the Del Rio UTB event that was originally postponed because of inclement weather.