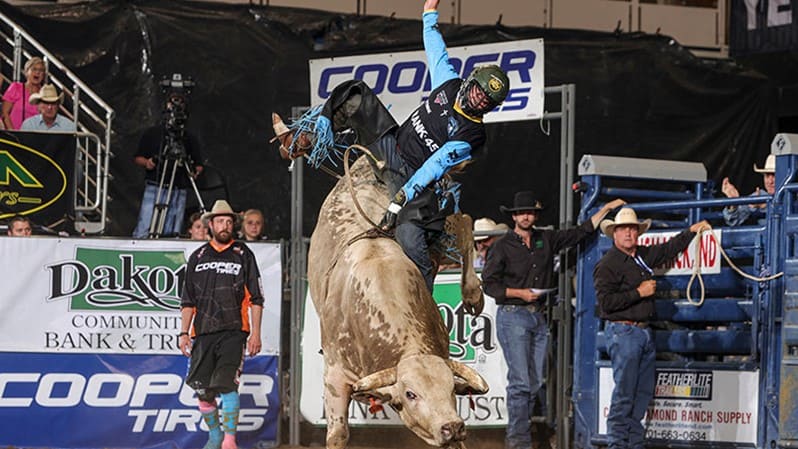 In a showdown between two of the winning teams from Day 1 of the Dakota Community Bank & Trust PBR (Professional Bull Riders) Bull Riding, the Carolina Cowboys (2-0-0) remained red hot, going 4-for-5 to secure the 350.75-261.5 victory against the Missouri Thunder (1-1-0). Continuing his strong momentum, 2022 PBR World Champion Daylon Swearingen (Piffard, New York) started Game 2 on a high note, dominating Bubba G (Dakota Rodeo/Brian & Ashley Pintar/Clay Struve/Chad Berger) for 89.75 points. Junior Patrick Souza (Sonora, Brazil) then scored 87.25 points on Dagger (Dakota Rodeo/Chad Berger). The Thunder’s second rider, Clayton Sellars (Fruitland Park, Florida), who rode for 89 points Friday night, countered with a score of 87 points on Gambini (Julie Rosen/Clay Struve/Dakota Rodeo/Chad Berger), putting the Thunder on the board and only one bull back. The young Floridian’s teammates, Andrew Alvidrez (Seminole, Texas) and Callum Miller (Warwick, Queensland, Australia), also recorded scores. However, it wasn’t enough to allow the Thunder to surpass the Cowboys’ four rides, including 87.25 points from Mason Taylor (Maypearl, Texas) and 86.5 points from Wingson Henrique da Silva (Navirai, Brazil). Silva has only been in the U.S. less than three weeks but is making a very strong impression on Cowboys Coach Jerome Davis, including a qualified ride Friday night and tonight’s clutch ride.

“It means the world being a part of this team, especially being on a team with such great friends as teammates,” said the Carolina Cowboys’ Mason Taylor. “We’ve got big shoes to fill. That has a lot to do with trying as hard as we are. Being on the same team as the reigning World Champ, that also brings out a little extra in you. I think it’s going to show that throughout the rest of this year – all of us working together as a team and all of us giving it everything we got. If we give it everything we got, we won’t fall off very many.”

“I was hoping to get 5-for-5 rode, but we got four, but it felt good when we got our draw last night. We got a good draw and took advantage of it,” Carolina Cowboys’ coach Jerome Davis said in response to the Game 2 victory. “It ain’t over. We’ve got to take care of these last rounds, so we will see what happens.”