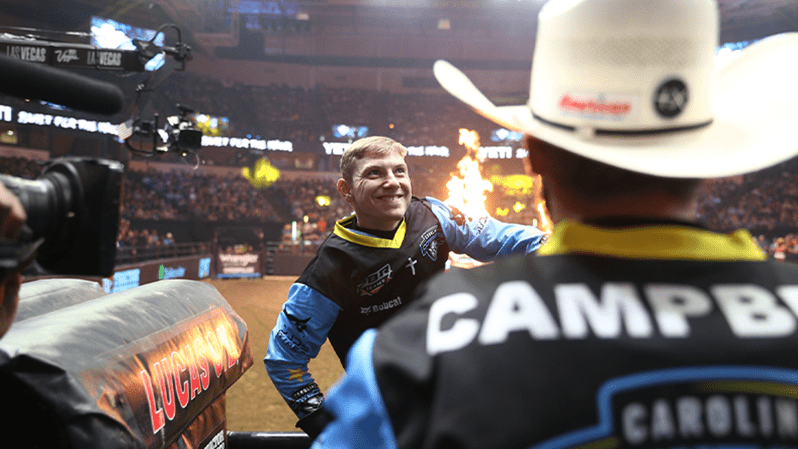 WINSTON-SALEM, N.C. – The Carolina Cowboys delivered a performance that won’t soon be forgotten Saturday evening inside LJVM Coliseum in Winston-Salem, North Carolina. Registering a walk-off win against the Arizona Ridge Riders, the Cowboys overtook the No. 1 rank in the PBR (Professional Bull Riders) Team Series standings.

In a game that was decided by the final outs, reigning PBR World Champion Daylon Swearingen (Piffard, New York) delivered the go-ahead score as the Cowboys’ closer. His 87.75-point ride atop Jailhouse Cat (Clark View Farms/Phillips) not only earned his team their sixth-consecutive game win, but also allowed them to leapfrog the Ridge Riders for the No. 1 position in the league.

The Carolina Cowboys are now not only atop the league standings, but also lead the PBR Cowboy Days event standings as one of three teams to be a perfect 2-0 thus far in the Tar Heel State.

The Kansas City Outlaws also remained perfect in game play Saturday evening, besting the Texas Rattlers, presented by Ariat, 171-167.5 to improve to 2-0 and rise to second on the event leaderboard.

The Missouri Thunder logged their first win in North Carolina, beating the Nashville Stampede 252.25-246.75 in the highest-scoring game of the electric evening.

PBR Cowboy Days concludes Sunday, September 11 at 1:45 p.m. ET. Tickets are still available and can be purchased online at Ticketmaster.com and PBR.com, at the LJVM Coliseum Box Office or by calling PBR customer service at 1-800-732-1727.

On Sunday, September 11 the festival will open at 10:00 a.m. at the Winston-Salem Fairgrounds. Cowboy Church will commence at 11:00 a.m. on the Tractor Supply Co. broadcast trailer, led by Robby Dilmore, while also featuring bull rider testimonials and remarks from Richard Childress.

PBR RidePass on Pluto TV will offer replays of all the PBR Team Series action from Winston-Salem, North Carolina. Check https://pluto.tv/en/live-tv/pbr-ridepass for the latest programming schedule.

Riding in the final game of the evening for the second night of PBR (Professional Bull Riders) Team Series competition in Winston-Salem, North Carolina, the host Carolina Cowboys brought the electric crowd inside LJVM Coliseum to a deafening roar as they delivered a walk-off win against the Arizona Ridge Riders to overtake the No. 1 rank in the league.

The bottom of the fifth score was registered by the Cowboys’ closer, and reigning PBR World Champion Daylon Swearingen (Piffard, New York), who delivered the highest-marked ride of the night to clinch the victory. As the game got underway, the Carolina Cowboys jumped out to an early lead.

The Arizona outfit was quick to respond, converting in the top of the second when Eduardo Aparecido (Gouvelandia, Brazil) made the 8 atop Patillo Ridge (Tex Brothers Ranch/5S Bucking Bulls) for 83.5 points.

The Cowboys, however, were unable to add to their diminished 2-point lead in the bottom of the frame when Boudreaux Campbell (Crockett, Texas) was bested by Chili Pepper (Lucas Manning Bucking Bulls) in a quick 2.77 seconds.

As the game approached the mid-way point, the Ridge Riders stumbled, with Vitor Losnake (Bauru, Brazil) bucking off, while the Cowboys regained their winning form, growing their lead to 85.25 points when Mason Taylor (Maypearl, Texas) conquered Bobtail Bob (Blake Sharp) for 83.25 points.

After both teams bucked off in the fourth, the game came down to the fifth, with the Arizona Ridge Riders in a must-ride position at the top of the frame.

Despite a challenge from Carolina, Luciano de Castro (Guzolandia, Brazil) was awarded a qualified ride atop Just Denim (Mike Miller Bucking Bulls), scored 86 points to put his team 0.75 points ahead.

Needing a mere 1-point score, the pressure was on Swearingen as he readied to climb aboard Jailhouse Cat (Clark View Farms/Phillips). Remaining in perfect time with his animal athlete counterpart, Swearingen reached the needed 8, as the crowd went wild and his teammates jumped the chutes to celebrate with Swearingen dirtside.

Scored an evening-best 87.75 points, the ride propelled the Carolina Cowboys to a 256.5-169.5 win against the Arizona Ridge Riders.

The Carolina Cowboys now not only lead the league standings with a 10-5 record, but also sit atop the PBR Cowboy Days event standings with a perfect 2-0 record. They will look to remain perfect on Championship Sunday when they play the Nashville Stampede.

The Arizona Ridge Riders, who are now No. 2 in PBR Team Series competition, will look to end the weekend in the win column at PBR Cowboy Days when they play the Austin Gamblers in their final game in North Carolina.