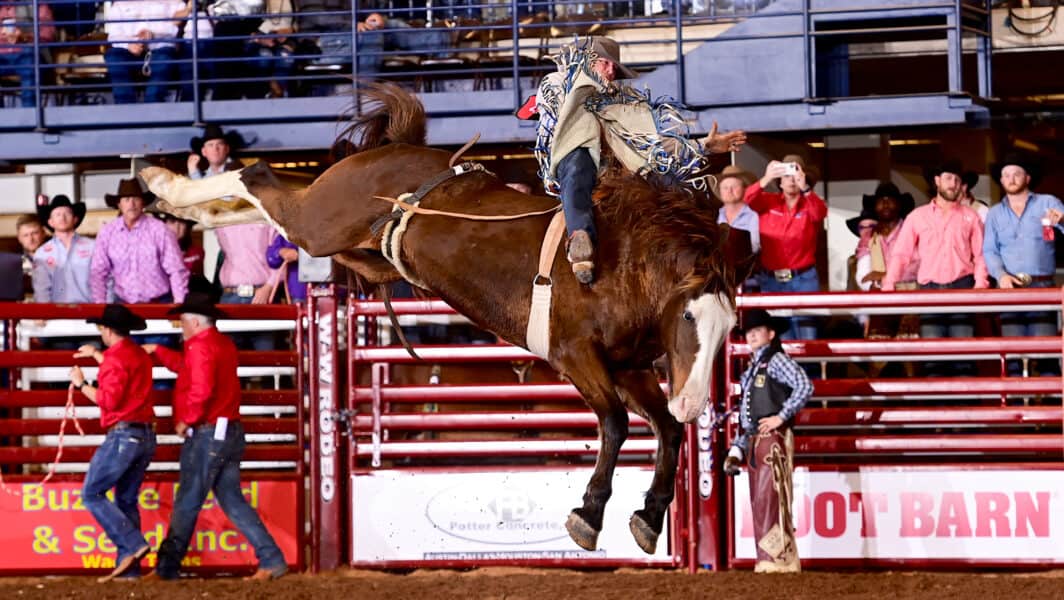 It began on opening night when Rutherford won his first career RAM TCFR go round, rolled on when he tied for the average win with Cole Reiner and ended when he clinched his first Texas Circuit year-end championship, moving from third to first with his $7,511 showing at the finals.

“We were counting up and I’ve been to six of ’em,” Rutherford said of the Texas CFR, “and up until the first go round two nights ago, I’d never won a round at the circuit finals. Or the average.”

“I put down a lot of big check marks for my career this year,” he continued. “I fell short of the Finals this year (he finished 21st in the final PRCA | RAM World Standings) but winning go’s, the average and year end here . . . I’m pretty pleased with that.”

Rutherford kicked off his stellar weekend with the round one win, an 87-point ride aboard Lancaster & Jones’ Black Pearl.

“He was an awesome little horse and the first three jumps, he had a lot of drop, and was stronger than I expected,” he said.

Rutherford shared the second round win with Bill Tutor, who matched his 84-point ride. On the final night, Rutherford drew Scarlet from Pickett Pro Rodeo, splitting third in the round to secure the tie in the average with Cole Reiner. Both cowboys earned 255.5 points on three horses.

Rutherford is on a great roll in the early months of the 2022 season. He’s entered just three PRCA rodeos and won each one of them.

“This has been a blessed, amazing start to this new season,” he said.

It fits perfectly with the goals he set with wife Katie back on Oct. 1.

“My wife and I talk about my rodeo career on the daily. I plan to rodeo like a big dog this year,” he said. “The ultimate goal is the NFR but with my family now, I’m going for quality over quantity. I want to take one hundred percent advantage, every time I nod my head.”

Son James will turn 4 in July and Justin Ty is four months old.

“I want to take my family with me as much as I can because I don’t do well without them,” Rutherford said.