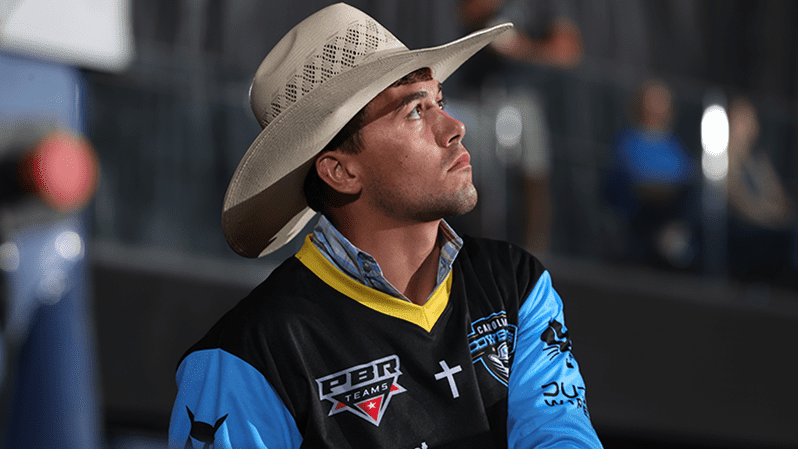 PUEBLO, Colo. – Daylon Swearingen won the 2022 PBR World Championship and the PBR World Finals event title in May, and he hasn’t taken his foot off the gas pedal since then.

In his very next event, the Dakota Community Bank & Trust PBR Team Series Preseason Event, Swearingen went 2-for-3 to help his Carolina Cowboys to a 2-0 record and second-place finish in the event.

The following week, at PBR Canada’s Regina PBR Classic, Swearingen went 2-for-2, including an 89.5-point ride on two-time reigning PBR Canada Bull of the Year Happy Camper, to earn the event win.

This past weekend, Swearingen made his first appearance on the Challenger Series. At the Sky Dancer PBR in Belcourt, North Dakota, he double-entered and went a combined 4-for-4 to not just win the event, but take third place as well.

Swearingen’s winning effort came thanks to an 85-point effort aboard Trump Train in Round 1 and an 89.5-point ride on Jungle Can Do in the championship round.

The Missouri Thunder’s Andrew Alvidrez (2-for-2) finished in second place, while Swearingen’s Cowboys teammate Mason Taylor (1-for-2) placed fourth and Caden Bunch of the Oklahoma Freedom (1-for-2) placed fifth.

Swearingen earned 44 points combined toward the Challenger Series standings, where he’s now ranked No. 3 with 54 points total. No. 1 Rafael Jose de Brito of the Texas Rattlers has 70.5 points.

Meanwhile, about two and a half hours south in Binford, North Dakota, 2018 PBR Rookie of the Year Keyshawn Whitehorse rode supreme at the Binford PBR Challenger Series event.

In Round 1, Whitehorse rode Sky Dancer for 87 points. He followed that up with a 90.5-point ride on Jungle Can Do in the championship round to take his first Challenger Series event win.

Whitehorse earned 15 points towards the Challenger Series standings, where he’s in a five-way tie for the No. 21 rank.

Rounding out the weekend’s Challenger Series slate was PBR Sunday at Cowtown, part of the Challenger Series’ residency at the legendary Cowtown Coliseum in Fort Worth, Texas. Joao Henrique Lucas went 1-for-2 with a Round 1 victory to take the event win.

The Challenger Series has another busy weekend coming up, with four events across three states.

The residency at Cowtown Coliseum in Fort Worth, Texas, continues as well with PBR Sunday at Cowtown on July 3. Catch all the action from Cowtown on RidePass on Pluto TV at 3 p.m. ET.