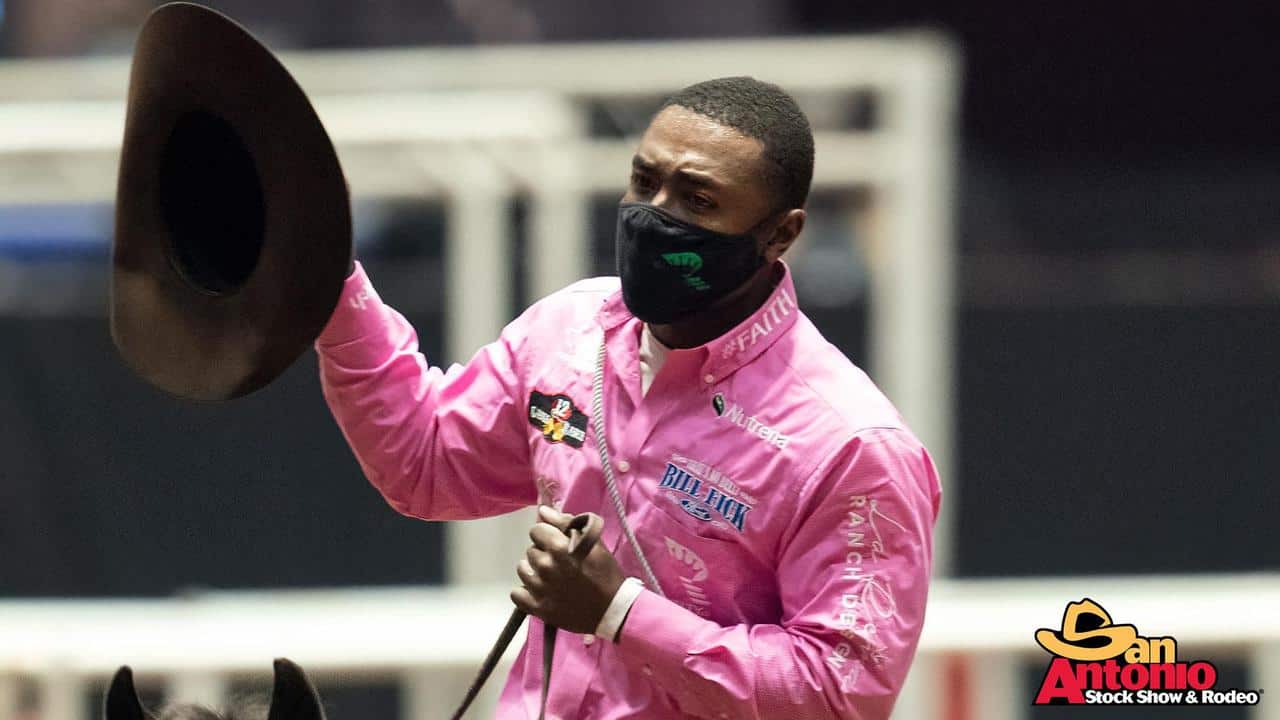 SAN ANTONIO – Cory Solomon would rather have been somewhere else on Thursday morning than driving three hours to San Antonio. He wanted to be somewhere more important than a rodeo.

But being a good cowboy, a professional, Solomon had already traded with Kyle Lucas in the semifinals of the San Antonio Stock Show & Rodeo so Lucas could compete Friday.

Because of that, Solomon missed out on taking part in laying to rest family friend Brent Husky. Solomon’s good deed was well rewarded.

The tie-down roper from Prairie View, Texas, made a 7.0-second run to win his semifinals bracket, edging Marty Yates by one-tenth of a second.

Husky passed away unexpectedly five days prior. That same day, Solomon had spoken with Husky. While Solomon couldn’t be at the service, members of his family attended while Solomon took to Freeman Coliseum.

Solomon wanted to do his friend proud, but going fourth in the set and seeing two sub-8-second runs and another at 8-flat in the first three runs had Solomon thinking a win might be out of the realm of possibility.

“Tonight was a good night to lay a good run down,” Solomon said. “Hopefully it’ll help them get through a tough time. … It wasn’t one of those rounds where you could safety up. Either you’re a hero or nobody knows you. I was blessed that it worked out tonight.”

Hopefully people will know Solomon after his effort, on multiple levels.

Solomon is a God-fearing man. It’s readily clear whenever you talk with him. But his level of dedication to his craft of ProRodeo was elevated just before last year’s Wrangler National Finals Rodeo. And by “just before” we mean about 48 hours before the NFR.

Solomon wasn’t supposed to compete in December at Globe Life Field in Arlington, Texas, the site of the 2020 NFR. Or maybe he was. Sometimes that’s how things happen.

Solomon was 16th in the 2020 PRCA | RAM World Standings, putting him on the outside looking in at the world’s biggest rodeo by less than $200. But when Caleb Smidt tested positive for COVID-19, Solomon was contacted and told he was likely up. He would be filling in for Smidt.

Solomon had done nothing in the weeks leading up to the NFR. He’d turned his horses out. He’d stopped practicing (“I was sitting on my couch,” he said). Heck, retirement from ProRodeo even ran through his mind.

“The first day, I didn’t know how to feel,” said Solomon, who hit the 30-year-old mark last summer. “Each day I was like, I’m not even supposed to be here, and that just changed my mindset of not putting extra pressure on myself, just go and do my job.”

In Round 1, Solomon placed fifth, taking $5,500. It wasn’t necessarily the money that triggered things. But Solomon realized he’d been given a special opportunity. And that opportunity – for him – was coming from somewhere beyond himself.

“God wanted me there, that’s how I got there,” Solomon said. “I could’ve made it anyways and maybe not touched people’s lives. But he took a guy who wasn’t in and brought a guy in. That’s just God working.”

Maybe more importantly, he left with a completely different way of thinking.

“Last year was a God-story at the Finals,” Solomon said. “It just changed me as a roper and as a person. I’m on the attack and just want to be better.

“… Now I want to go win first at a rodeo, not just place. That’s what the Finals did for me, it changed my whole mindset.”

That mindset hasn’t changed. In fact, it’s been reinforced. And Thursday night was further reinforcement of that belief.

Solomon might be quick to point to many reasons for his recent success – he thanks God, he thanks his Brazilian horse, Play, he thanks the luck of his draws.

He doesn’t thank himself. He should. He deserves it.

Solomon might have felt like he should have been somewhere else – with his family, with Husky’s family, anywhere but at a rodeo.

But on Thursday night, Cory Solomon was right where he was supposed to be.