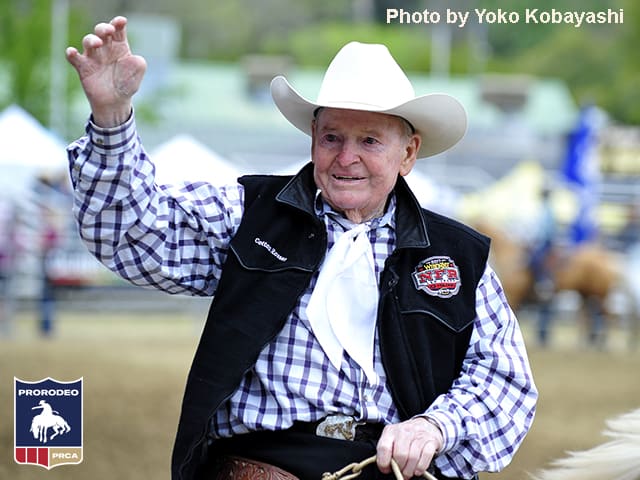 Rosser will be honored at the 12th annual Wrangler Gold Buckle Gala on Dec. 2 at the South Point Grand Ballroom in Las Vegas.

“This is a wonderful, great honor to receive,” said Rosser, 91.

Rosser was inducted into the ProRodeo Hall of Fame in 1995. Rosser and his son, Reno, operate the Flying U Rodeo and Rosser Rodeo stock contracting companies based in Marysville, Calif. They produce about 50 rodeos a year.

“I’m just the PR man now,” Cotton said with a chuckle. “I never imagined my rodeo career would be like this. I’m the richest guy in the world with memories and friends. I’ve loved every minute of the rodeo business and I would do it all over again. It has been a great experience.”

Rosser is a pioneer in the rodeo industry who was ahead of his time in developing the entertainment side of rodeo. Rosser received the PRCA Donita Barnes Contract Personnel Lifetime Achievement award in 2015.

“A lot of rodeos we have, we have had for 60 years, like the Cow Palace, Red Bluff (in California) and Reno (Nev.),” said Rosser, who served on the PRCA Board of Directors for many years. “They even put a statue up in Reno of me (in 2014). It just doesn’t get much better. I have raised a good family and I really tried to help rodeo. Some people say if you’ve seen one rodeo, you have seen them all, and I have always said I don’t think that’s quite true. Rodeo is the greatest sport in the world, and I’m glad to have been a part of it for the last 70 years.”

Rosser still rides a horse into the arena, and he wouldn’t have it any other way.

“Rodeo is the only thing I know,” Rosser said. “It doesn’t get better than that when you ride into the arena and they play the national anthem and there is a full house,” he said.

For more than 60 years, Rosser has been known for his spectacular, flamboyant opening ceremonies at rodeos on the West Coast and for many years at the Wrangler National Finals Rodeo.

Rosser is considered the “P.T. Barnum” of professional rodeo. He has searched out ideas from sources as remote from the sport as ice shows and circuses, looking for that special something he can add to his productions.

The other side of Rosser is his history as a top cowboy, who started competing in all of rodeo’s standard events as a teenager and later as a member of his college rodeo team at Cal Poly University-San Luis Obispo. As a professional, he won buckles, saddles and trophies. Among his many titles, one of Rosser’s highlights was winning the all-around title at the 1951 Grand National Rodeo in San Francisco.

Rosser purchased the Flying U Rodeo Ranch in 1956, which is now the oldest continuing rodeo livestock company in the United States. In 1985, Rosser was named PRCA Stock Contractor of the Year.