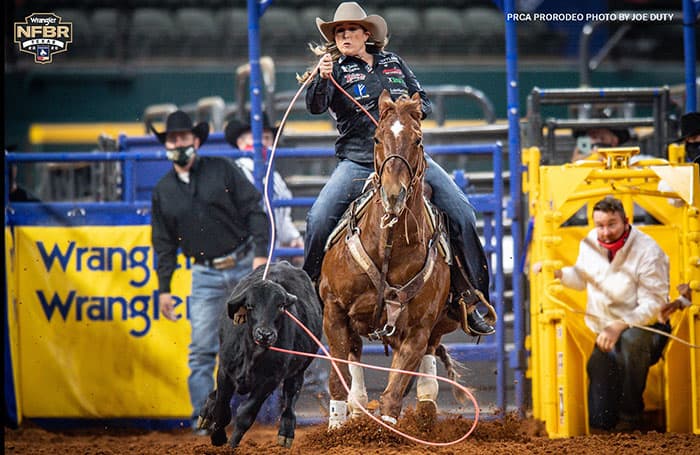 ARLINGTON, TEXAS – A difference maker and major advocate for women’s breakaway roping it is only fitting that Jackie Crawford would be crowned the 2020 WPRA World Champion Breakaway Roper on December 10 inside Globe Life Field in Arlington, Texas, as part of the first-ever National Finals Breakaway Roping (NFBR).

With the title Crawford now holds three WPRA world titles in breakaway roping, her 20th overall world title. She is the second most decorated member in the history of the WPRA, trailing the late Wanda Harper Bush, a member of the ProRodeo Hall of Fame, who collected 32 WPRA world titles during her career.

“I make fun of my husband (Charly) for crying in interviews, so I’ve got to put my big girl boots on for a second,” said a very emotional Crawford after learning of her recent world title. “I think all of us are put here for a reason and God places talents in our lives and we have a purpose. I am still trying to figure out why he is letting me be on this journey and have me win these things because I know it is out of my control. I just hope I can fulfill the purpose he has me here for because this is one amazing journey that I am getting to be on and little Journey (the baby girl she is carrying at six months pregnant) getting to be on it to. She was giving me some kicks today, so she was excited.

“I am fortunate to get to be here and be in front of the camera and be able to win this thing but the credit is due to so many people who have been behind this. You guys don’t know how much we appreciate it, the fans, the people that have produced this and made this all possible and I just can’t thank you enough from all of us from the bottom of our hearts. Thank you guys for adding breakaway roping to ProRodeos.”

Crawford started off this historic event winning the first round of the NFBR in a time of 1.9 seconds to win the Betty Gayle Cooper Ratliff fast time award, presented by the National Cowgirl Museum and Hall of Fame. Crawford would start the final day of the NFBR back in the winner’s circle in a time of 2.0 seconds.

“I wanted to come out here and treat it just like I did on that first day and go at these rounds,” said Crawford after the ninth round victory and second go-round win. “I don’t think any of these are less meaningful right now.”

She would come back in the 10th round and lay down a 2.3 second run which was good for second in the round. It wasn’t the National Finals Breakaway Roping 17-time WPRA World Champion JJ Hampton was hoping for but she ended it on a high note winning the 10th round in a time of 2.2 seconds. Hampton a real estate agent in nearby Stephenville, Texas, was just honored to be a part of this historic event after being a member of the WPRA since the 1991.

“I want to thank everyone for coming and cheering me on. I have the best fans,” said Hampton, following her round win. “This means a whole lot to me. I didn’t perform as well as I wanted to this week and was just lucky to pull out the win in the tenth round. I am just glad I finally got a chance to rope on this stage.”

Following the 10th round the top eight in the average advanced to the semifinal round. Crawford was fourth in the average in a total time of 22.2 seconds on nine head. Her only no time came in the fifth round when she roped a leg and being the honest competitor she is, she pointed the illegal catch out to the pro officials who had given her a time of 2.4 seconds.

Eight-time WPRA World Champion Lari Dee Guy would round out the top four advancing to the finals after posting a 2.0-second run. As a result, Guy would be the first gunner out in the final round and knowing she would have to win the round to have any chance at the world title she came out fast, actually a little too fast breaking the barrier and ending with a time of 12.0 seconds.

Crawford was next out and she too would incur a speeding penalty breaking the barrier and finishing with an 11.8-second run. Angelone, the NFBR champion, performed with ice in her veins stopping the clock in a cool 2.3 seconds to take over the lead in the Finals with one roper to go.

Fabrizio would be clean but not quite fast enough to catch Angelone after finishing with a 2.5-second run.

When the dust settled and all the calculating was complete, Crawford would find her name atop the WPRA World Standings for the year with $47,185. She entered the first-ever NFBR ranked second but would leave No. 1 after winning $25,536 in Arlington.

Angelone was the reserve world champion with $45,261. Angelone entered the NFBR ranked third in the world and won an event best $29,343 during the three-day competition.