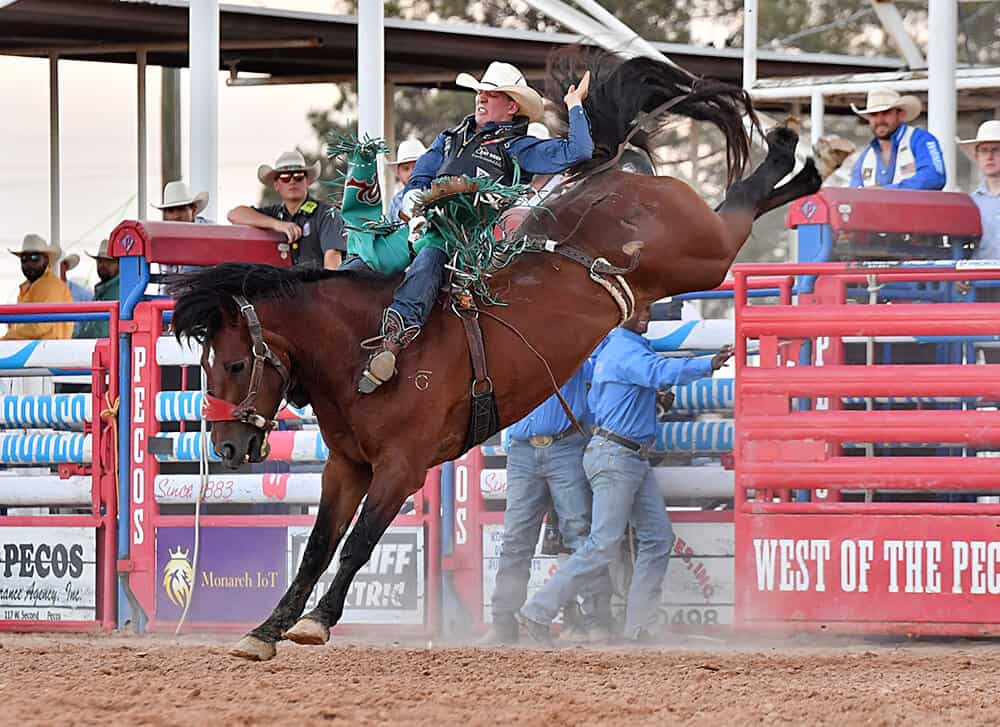 PECOS, Texas – Over the last 11 years of the West of the Pecos Rodeo, one of the greatest bucking horses in the sport has reigned supreme.

“This was my 17th year in Pecos, and I’m proud to have been at that rodeo so long,” said Pete Carr, owner of the Dallas-based livestock firm. “It’s the oldest rodeo in the world, and we love being part of it. A lot of our animals buck good there, but there’s something about it that really fits Dirty Jacket. He’s been winning there for 10 years.”

Dirty Jacket has been exceptional at just about every community in which he’s been showcased, but there seems to be something special that happens when he performs inside Buck Jackson Arena. Clint Cannon learned that in 2012, when he matched moves with the powerful bucking for 90 points to win the prestigious Pecos buckle.

In the years since, Dirty Jacket has proven his mettle time after time. Taylor Price scored 88.5 points to win in 2013; two years later, Ryan Gray set a West of the Pecos record with a 92-point score. Jamie Howlett was 88.5 to win in 2017, then Kaycee Feild utilized his 91.5-point winning ride last year to catapult himself to his record sixth world champion’s gold buckle.

“He’s always been that good,” said Pope, the NFR average champion each of the past two years from Waverly, Kansas. “That has a lot of try and a lot of heart; he is a special horse. Not many horses can be hauled like he has been and still do what he does at his age.

“He’s got the biggest heart you’ll ever really see in a horse.”

It was the first time the two-time NFR qualifier had matched his skills with Dirty Jacket, and it was everything Pope had hoped it would be.

“I told (my fiancé) Sydney a couple of months ago when Tim (O’Connell) got on him in San Angelo that I hope I could get on him before he gets retired,” Pope said. “I was pretty tickled when I saw my name next to his on the call backs; I might have squealed a little bit.”

His trademark explosion out of the bucking chutes has been showcased time after time. In 2014, after having stayed at home on the Carr ranch to heal from an injury, Dirty Jacket returned to action during the championship round of the Cheyenne (Wyoming) Frontier Days Rodeo and promptly guided Richmond Champion to the title with a 91-point ride.

At the NFR that December, Champion won the fifth round and Caleb Bennett won the 10th round on the world-class horse.

Over the years, cowboys continuously have found their ways to the top on the back of Dirty Jacket. Since his first appearance in Guymon, Oklahoma, in May 2008, there have been more than 40 victories associated with the stout bay gelding. That includes the victory in Guymon that year, when, as a 4-year-old, he guided Jared Schlegel to the title in the Oklahoma Panhandle with an 87-point ride.

“I had a pretty good feeling from the first time I saw him that there was something to him, and that’s why I purchased him from Jim and Maggie Zinser,” Carr said. “We were still a young company when I bought him and another Night Jacket colt, a mare named Outa Sight. We loaded them in the trailer with Deuces Night, a Night Jacket mare Wes Stevenson had purchased, and brought them all back to Texas.

“I was fortunate enough to get Deuces Night from Wes a year or so later, and all three of those horses were phenomenal for us. They all went to the NFR. They all bucked great. Dirty Jacket has been exceptional from Day One.”

To further consider Dirty Jacket’s greatness, one has to see what the bucking horse has done when he’s switched to saddle bronc riding. He’s continued to excel; of his 12 qualifications to the NFR, he’s been bucked in broncs three times. In his first year under the saddle, Rusty Wright won the title in Eagle, Colorado, after posting a 91-point ride.

Raised on the Zinser Ranch in Michigan, the son Night Jacket – possibly one of the most prolific breeding stallions in ProRodeo history – Dirty Jacket was destined for greatness. Carr purchased him as a colt, then put him through the paces before realizing he had something special.

After seeing how he handled himself in different situations, Carr opted to test Dirty Jacket at his first rodeo in Guymon 14 years ago. The big equine athlete has been winning ever since.