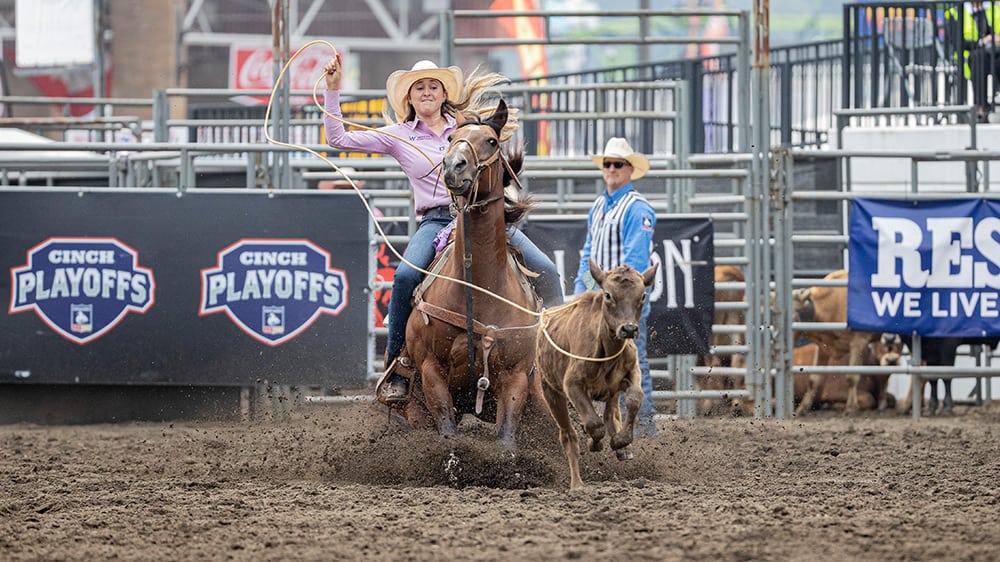 When Jordi Edens looks back on her 2022 ProRodeo season there will be two defining moments that landed her at her first Wrangler National Finals Breakaway Roping but the moments wouldn’t have come without prior disappointments and lots of time in the practice pen.

Edens of Gatesville, Texas, turned in the biggest wins of her career at the Washington State Fair in Puyallup, Washington, that served as the Cinch Playoffs in 2022. In just her first trip to this northwest rodeo, Edens left town with $15,700 and a solid spot inside the Top 15 with only three weeks left in the regular season.

Although Edens came to Puyallup in the Top 15, she considered herself still on the bubble as she was No. 13 with two world champions Jackie Crawford and Sawyer Gilbert behind her in the standings. She landed herself in the Top 15 following the Fourth of July run, where she won $15,156 during that week, the most of any breakaway roper but Edens knew a big win in Puyallup would seal the deal for her first trip to the NFBR.

Edens competed in the first performance and finished in a three way tie for first with a 3.1-second run along with Beau Peterson and Tacy Webb. She would finish just out of the money in the second performance with a 3.3-second run but her two head average time, 6.4 seconds, was enough to place her third in the first group to advance to the semifinals. The top four in the average in both sets advanced to a clean-slate semifinals.

Once in the semifinals, Edens knew it was make or break and she came out swinging. She won the semifinals in a time of 3.0 seconds to advance to the Finals and by winning the semifinals it meant she would go last in the finals. The big money was paid out in the finals with the winner being awarded $13,000. That was the prize Edens was looking for and she went out and roped it.

Beau Peterson, whom Edens had tied with in the first round, was second in the semifinals with a 3.2 second run. Therefore, Peterson roped right in front of Edens in the final round and the two previous ropers had received no times, so Peterson set the bar with a 3.7-second run.

Edens roped her calf in a clean 2.8 seconds to capture the win and the big payday.

“The stars were aligned this week in Puyallup,” wrote Edens on her Facebook page. “Was blessed to win the Tour Finale and hopefully secured my spot to the NFR. Thank you to my TEAM for everything. Both my parents got to be there and watch and I couldn’t do it without them. Judy never fails me and I have all the confidence in the world on her.”

Edens will now follow in her father’s footsteps of competing at the NFR. Tommy qualified for the 2007 Wrangler National Finals Rodeo in the team roping and roped with Coby Jones. 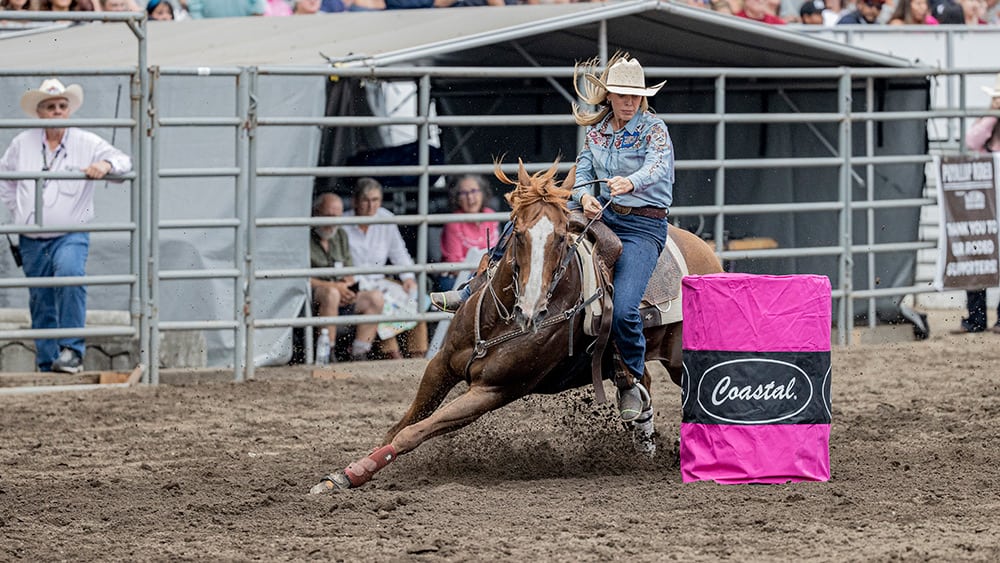 Another WPRA member that entered Puyallup ranked 13th was barrel racer Margo Crowther of North Fort Myers, Florida, also looking for her first trip to the Wrangler NFR. She too took advantage of big payday in Puyallup to punch her ticket to Las Vegas. Ironically enough, Crowther also picked up $15,700 like Edens to move off the NFR bubble. 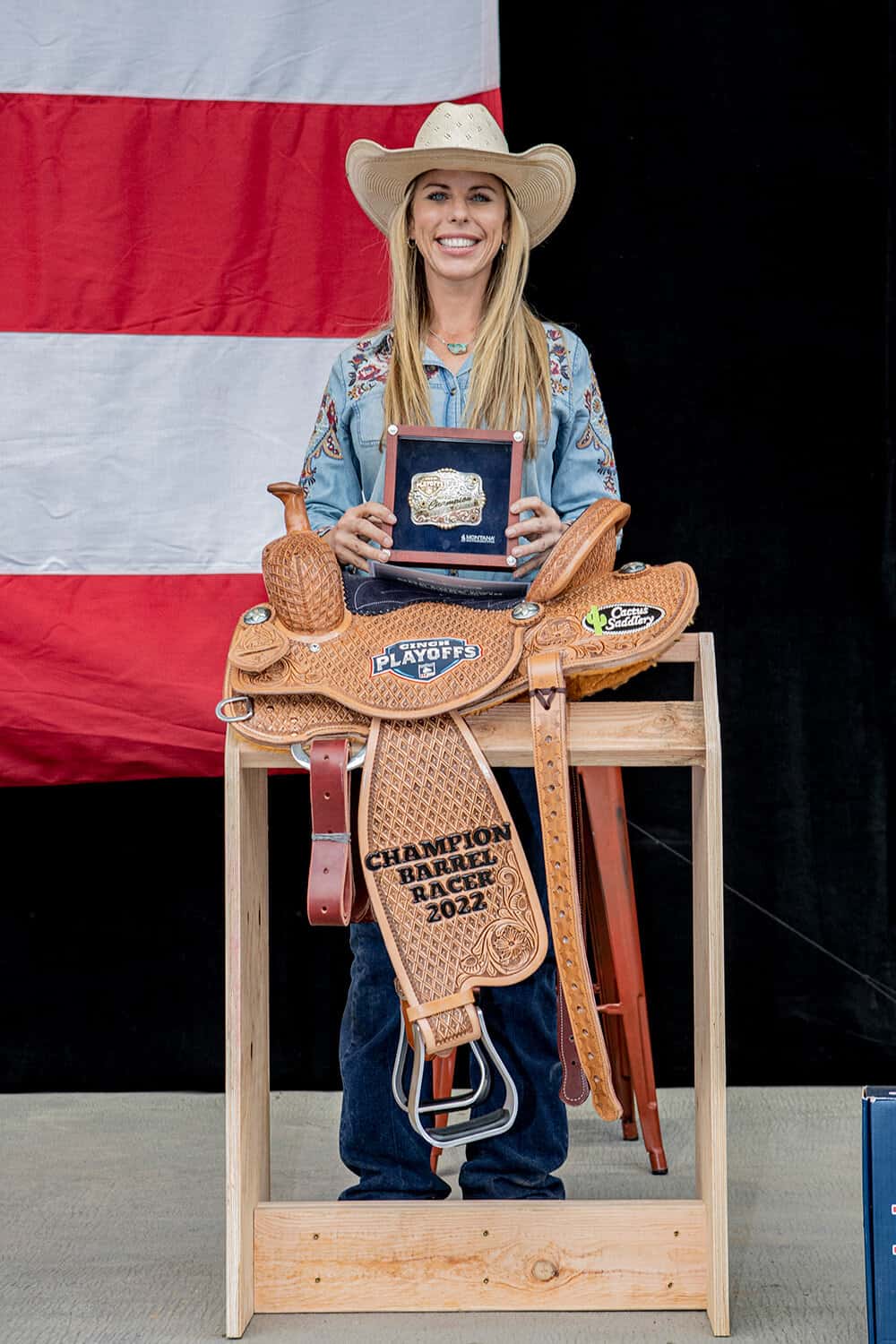 Crowther rode her 2012 petite sorrel mare Shes Packin Fame “Sissy” to the title. The duo competed in the second set of barrel racers with three-time world champion Hailey Kinsel and Sister winning the first round in a time of 13.63 seconds. Crowther and Sissy would take second in a time of 13.93 seconds.

“We were second in our set this afternoon…Sissy was working and loved the small pen set-up,” wrote Crowther on her Facebook page following their first round performance.

They were a little longer in the second round finishing out of the money with a 14.07-second run. The second performance of the second set was won by Tarryn Lee in a time of 13.58 seconds.

Just like in the breakaway roping, the top four in the average in both sets advanced to the semifinal round. Crowther squeaked in to the final spot with her two run time of 28.00 seconds. In the semifinals, Crowther and Sissy stopped the clock in 13.90 seconds just behind Shelley Morgan in a time of 13.85 seconds. The two would trade spots in the final round with Crowther stopping the clock in 13.96 seconds, while Morgan finished second in 14.15 seconds. Kinsel finished third in 14.37 seconds and Leslie Smalygo finished fourth despite hitting a barrel.

Smalygo entered the weekend ranked No. 16 but picked up $8,650 in Puyallup to keep her hopes alive for her first NFR berth. Her fate will be determined in the coming weeks as the season comes to a close.