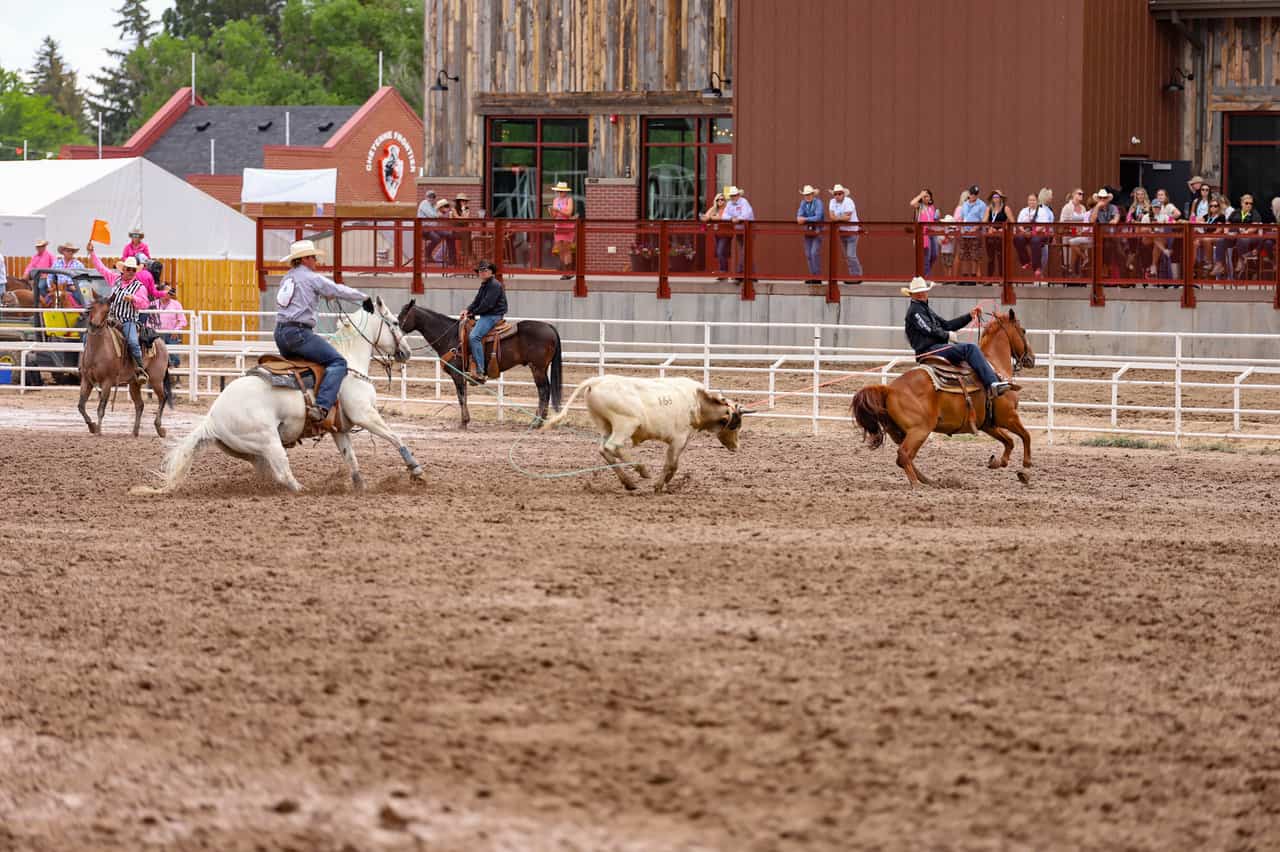 Three-time world champions Clay Tryan of Billings, Montana, and Jade Korkill of Fallon, Nevada, won the team roping in Quarter Finals 6 at the 126th Cheyenne Frontier Days Rodeo (CFD) on Thursday, July 28. They are the reigning CFD champions and could become the first duo to win consecutive team roping titles at the “Daddy of ‘em All.” PRCA photo by Robert Rosales

CHEYENNE, Wyo. – Although heavy rain on Wednesday left the arena muddy at Frontier Park, three-time world champions Clay Tryan of Billings, Montana, and Jade Corkill of Fallon, Nevada, took first place in the team roping in Quarter Finals 6 at the 126th Cheyenne Frontier Days Rodeo (CFD). Their time of 7.9 seconds was half a second faster than the second-place team. 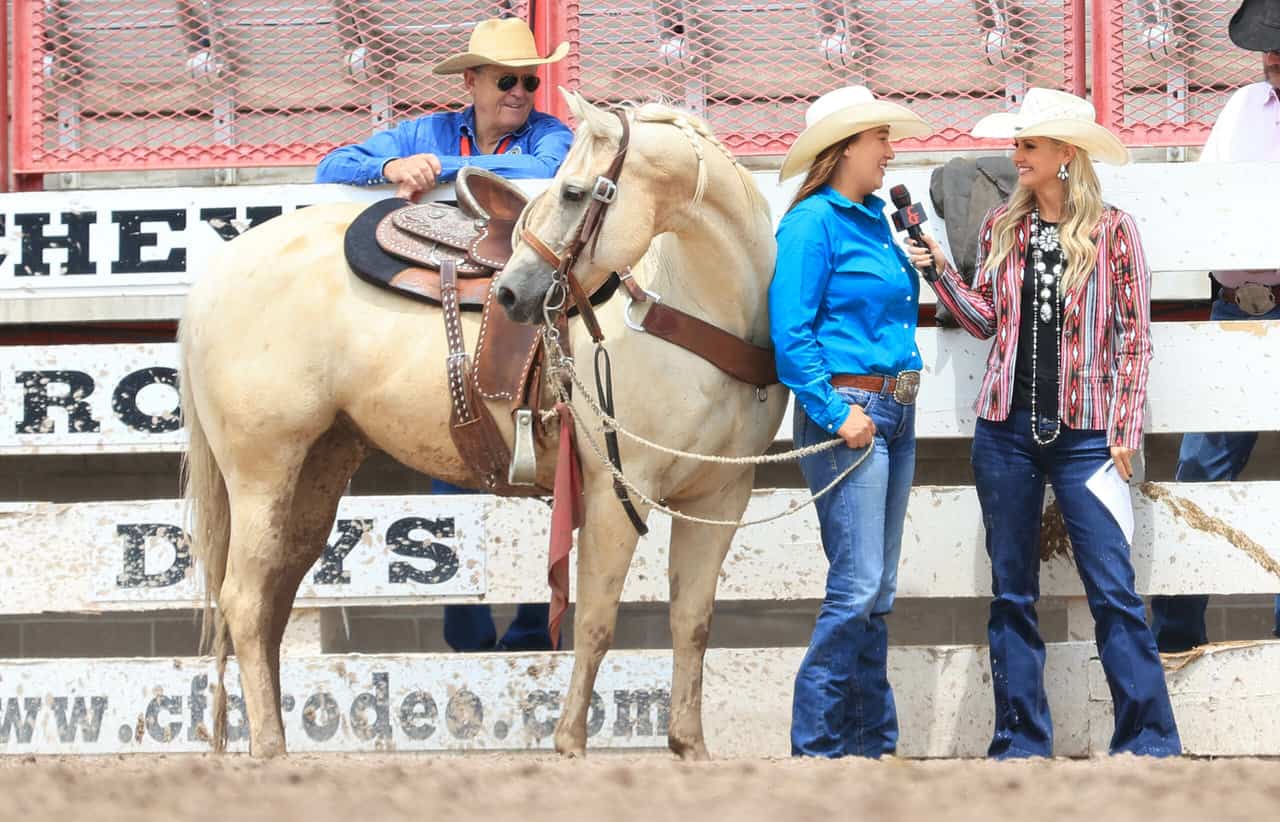 Megan Small of Busby, Montana, talks to Amy Wilson of The Cowboy Channel after winning Quarter Finals 6 of breakaway roping at the 126th Cheyenne Frontier Days Rodeo with a time of 3.8 seconds. Her horse doesn’t seem interested in being a television star, however. PRCA photo by Jackie Jensen

Injuries are inherent in rodeo. The old rodeo saying is “it is not if you’ll get hurt; it’s when you’ll get hurt.” Nobody knows that better that two of the timed event winners of Quarter Finals 6 – ropers Megan Small and Hunter Herrin. 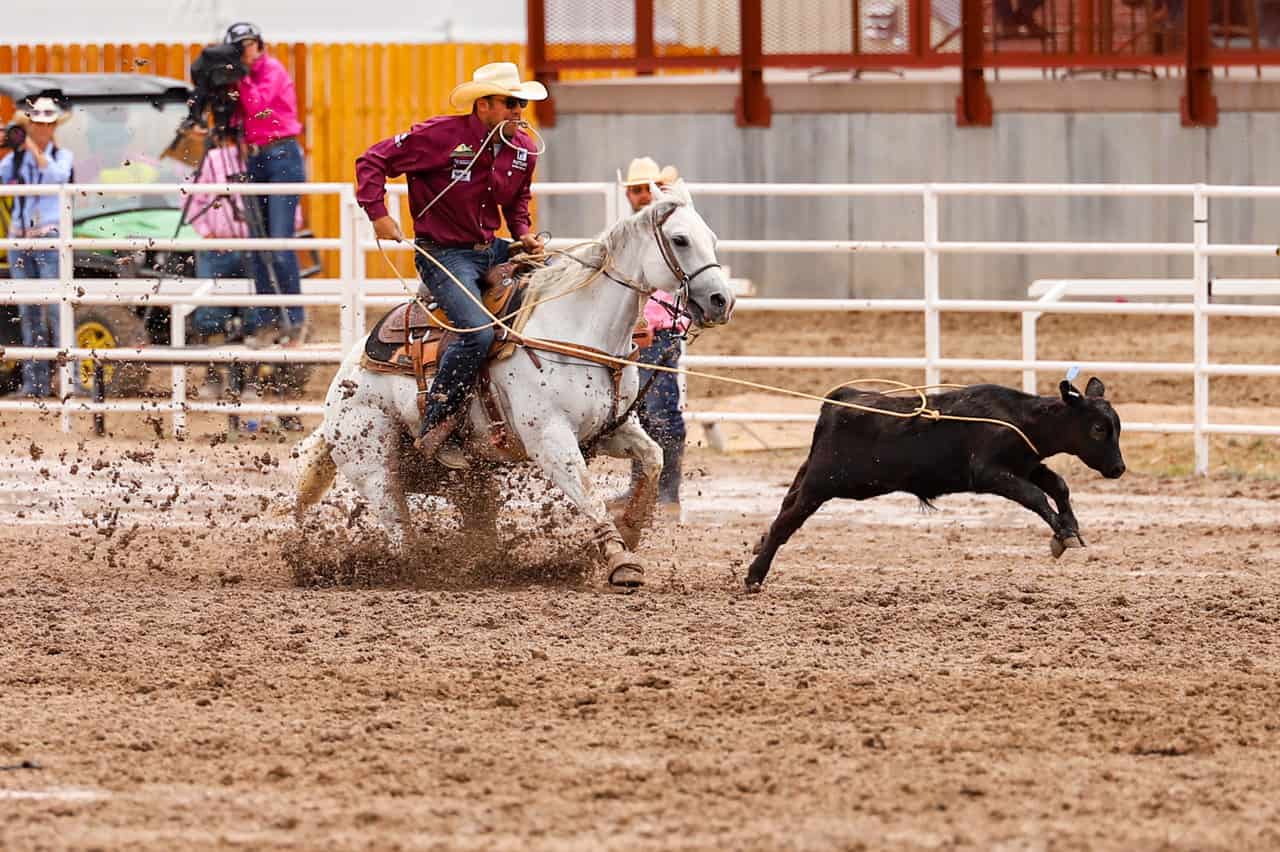 Hunter Herrin of Apache, Oklahoma, roped and tied this calf in 12.0 seconds to win Quarter Finals 6 of the 126th Cheyenne Frontier Days Rodeo. Herro, who won more than $21,000 last week at Salinas, California, and Spanish Fork, Utah, is now ranked 12th in the Professional Rodeo Cowboys Association (PRCA) world championship standings and, with continued success at CFD, could rise even higher. PRCA Photo by Robert Rosales

Small, who grew up on a ranch in Montana, has a passion for roping. She lost her thumb on her roping hand in a team roping accident and had to re-learn many things, including how to rope since ropers rely on their thumbs to control their loops. The former Indian National Finals Rodeo qualifier from Busby, Montana, caught her calf in 3.8 seconds to win the breakaway roping by 1.1 seconds and advance to the Semifinals.

Hunter Herrin of Apache, Oklahoma, has nearly $2 million in career tie-down roping winnings and has qualified for 11 Wrangler National Finals Rodeos (WNFR). He missed most of three rodeo seasons after 2016 with major injuries and multiple hip surgeries before returning to the top 15 the past two seasons. This year started slowly for Herrin, but he has been winning lately, winning $11,000 plus at the California Rodeo in Salinas and more than $10,000 at Spanish Fork, Utah last week to move up to 12th in the world championship standings.

His time of 12.0 seconds won Quarter Finals 6 and advanced him to the Semifinals. A win here on Championship Sunday could virtually guarantee a 12th trip to Las Vegas for Herrin.

The following are unofficial results from the Quarter Finals 6 at the Cheyenne Frontier Days Rodeo on Thursday, July 28. Payoff subject to change.