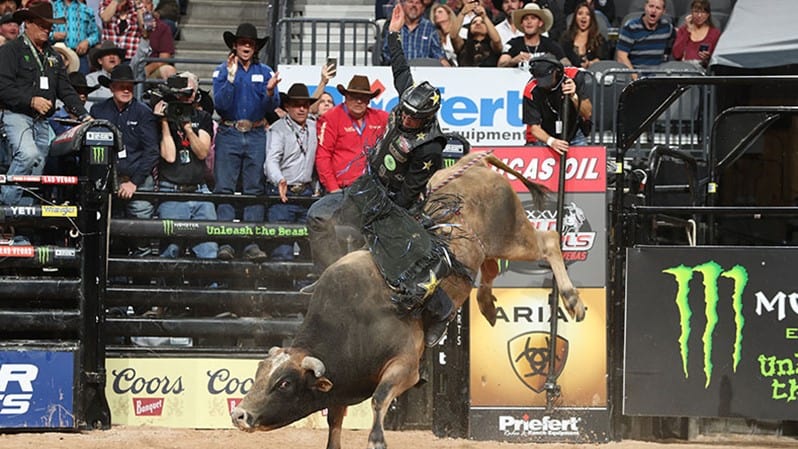 SASKATOON, Sask. – Ahead of the 2021 PBR (Professional Bull Riders) World Finals in Las Vegas, Nevada, Nov. 3-7, four Canadian bovine athletes have been selected to buck at the sport’s most prestigious event inside T-Mobile Arena.

The remaining two Canadian bovine athletes selected to buck at the 2021 PBR World Finals come from Ponoka, Alberta, outfit Vold Rodeo. Both Unkle Kranky (Vold Rodeo) and Hard Not To Get (Vold/Hart Cattle Co.) will be making their World Finals debut.

Happy Camper made his World Finals debut in 2017. Drawn by Dener Barbosa (Paulo de Faria, Brazil), the world’s current No. 5-ranked rider became the first to cover Happy Camper, reaching the requisite 8 for an 87-point score in Round 3.

The “Bucking Sensation from the Two Bit Nation” returned to the PBR World Finals in 2018, reigniting his rivalry with Barbosa. With the two formidable athletes once again going head-to-head in Round 3, Barbosa again went the distance atop Happy Camper, this time for an 84.75-point score.

Thus far in 2021, Happy Camper, who has bucked exclusively on Canadian soil, has chartered a course that could potentially make him the first two-time PBR Canada Bull of the Year in league history.

Bucking nine times, Happy Camper has earned a league-leading five Bull of the Event honors, with three of those trips yielding scores of 45 points or more.

Catch My Drift made his PBR World Finals debut in 2019. He was ridden by Chase Outlaw (Hamburg, Arkansas) for 88 points in Round 3.

Much like Happy Camper, Catch My Drift is also attempting to become the first two-time PBR Canada Bull of the Year but is attempting to etch his name in the records books by doing it in consecutive years.

The black bovine athlete has made nine trips on home soil in 2021, with three of those trips ending in 90-point scores.

On the Touring Pro Division, Catch My Drift has notched one Bull of the Event honor, leading the field in Ponoka when he earned a 44.5-point score for his 6.06-second buckoff of two-time PBR Canada Champion Zane Lambert (Ponoka, Alberta).

While unridden Vold Rodeo standout Hard Not To Get is readying for his World Finals debut, the bull is no stranger to bucking stateside on the elite Unleash The Beast. Having appeared at five premier series events, Hard Not To Get was marked a career-best 44.25 points when he bested Brennon Eldred (Sulphur, Oklahoma) in 4.57 seconds this June in Las Vegas.

The 2021 PBR World Finals will mark Unkle Kranky’s first out on American soil.

On Canadian soil, the animal athlete has been ridden just once in seven outs on record, covered by Australian sensation Callum Miller (Warwick, Queensland, Australia) for 89 points at the season-launch Cup Series event in Lethbridge, Alberta in August.

Unkle Kranky has also twice been marked more than 45 points. Bucking at the renowned Glen Keeley Memorial PBR this August in Stavely, the bull earned a 45-point score for his 7.53-second buckoff of Griffin Smeltzer (Claresholm, Alberta), while in September, Unkle Kranky posted a career-best 45.5-point score for his 3.87 seconds of work with Smeltzer.

Tickets are still available for the 2021 PBR World Finals.

Marking the year-end event’s final time in Las Vegas at T-Mobile Arena, tickets for the five-day event range in price from $27 to $351. Fans can purchase tickets at the T-Mobile Arena Box Office, pbr.com, at AXS.com, or by phone through the PBR Customer Service Department at 800-732-1727.