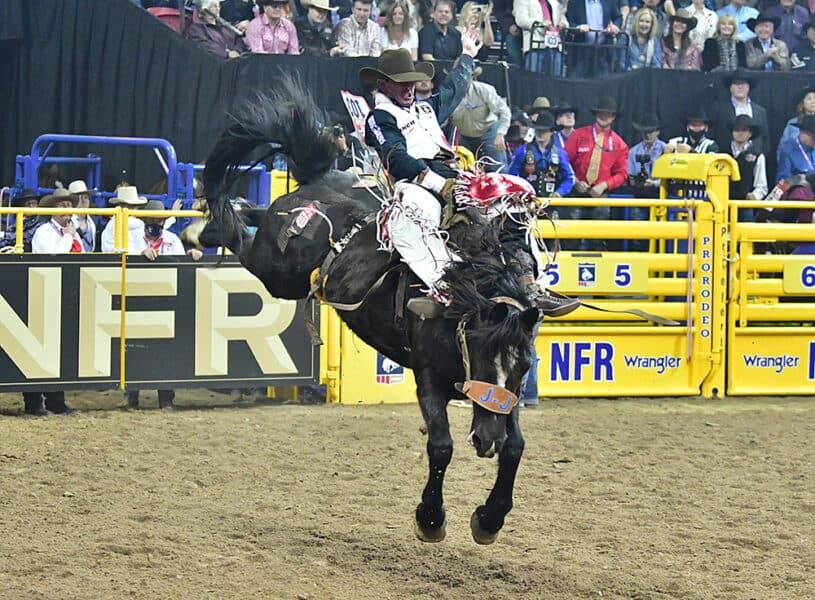 He rode J Bar J’s Yum Bugs for 85.5 points to finish in a three-way tie for third place during Tuesday’s sixth round of the Wrangler National Finals Rodeo. He pocketed $11,466 and pushed his Sin City earnings to $70,562.

“It’s awesome,” Franks said after his ride. “It helps with the average. It helps with everything really. It is awesome to be able to come in here the first time and be able to hang with all the big dogs.”

He sits third in the aggregate race with having a six-ride cumulative score of 516 points, and he’s moved up three spots to ninth in the world standings with $147,955.

“One thing (world champions) Mark Gomes and Jeff Collins have always told me was to use the KISS method: Keep It Simple Stupid; just try to keep it as simple as you can, just one at a time.”

“I knew he would be a little wild at the start, so I wanted to hold my feet through it,” he said, talking about the spur stroke from the animal’s neck to the rigging in rhythm with the horse. “Garrett let them fly, and that’s what messed him up. There’s a lot of stuff going on with that horse, so you just have to hold your feet through it and wait for him to line out a little bit. It feels really good after that.”

Through six nights of ProRodeo’s finale, he has placed five times. His rookie status has evaporated in a flurry of spur strokes on the best horses the sport had to offer through the 2021 season. He has four more nights to continue to cash in.

“This is going very fast,” Franks said. “I was just hanging around, feeling groggy just ready to do, and the next thing you know is it’s over. It just seems like the other day we were starting it out, so it goes by very fast.”