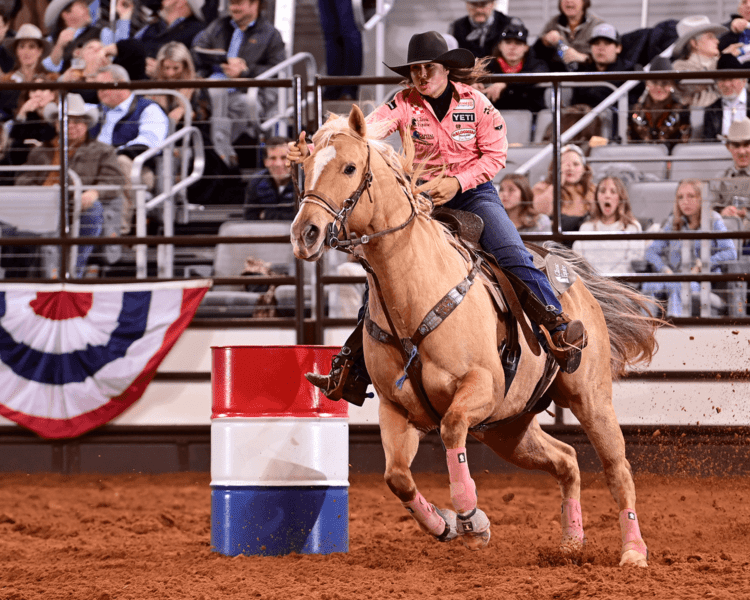 Hailey Kinsel of Cotulla, Texas is on track to win her third consecutive Fort Worth Stock Show & Rodeo championship. Hailey and her great mare DM Sissy Hayday “Sister” stopped the clock in 16.26 seconds to win Semi-Finals B. FWSSR photo by James Phifer.

FORT WORTH, Texas — It was a night of hits and misses at Semi-Finals B at the Fort Worth Stock Show & Rodeo’s ProRodeo Tournament.

Those misses mostly came from contestants who were affected by the weather, stuck in airports, and just couldn’t get here. They were replaced by the next qualifiers in the lineup. In every case, those contestants took advantage of their unexpected opportunity. 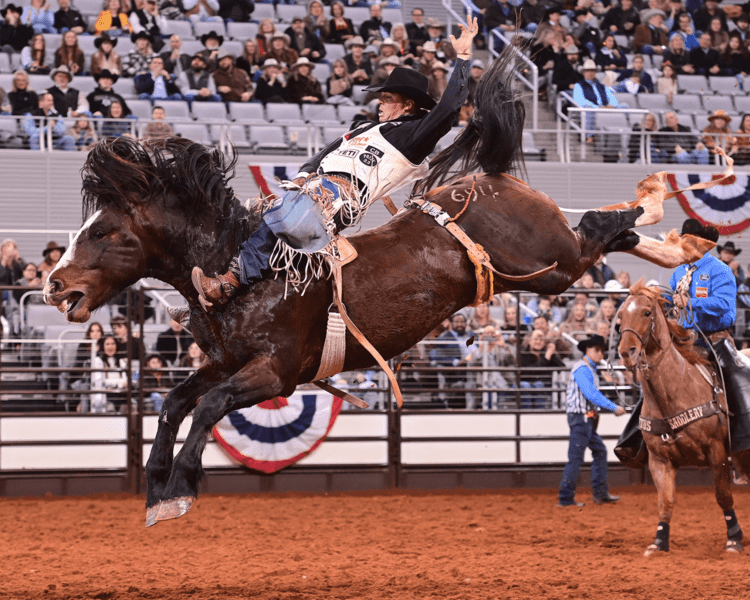 Canadian Jake Watson was stuck on a delayed airplane trying to get here. It didn’t happen, so his fellow countryman Lucas Macza took his place. The horse that Watson was supposed to get on was J Bar J’s Tickled Pink. Macza got on the same horse and won the semi-final with an 86.5-point score. Macza added $4,000 to his checking account and will ride for the championship Saturday night.

A similar situation happened in the bull riding and the man that got the call to come compete on Friday night was Trey Kimzey, from Strong City, Oklahoma. He got on the bull named Loaded Dice from J Bar J. Kimzey scored 85.5 points, won first and $4,000. He also punched his ticket to the championship finals where he will be competing with his brother, seven-time world champion Sage Kimzey.

In the steer wrestling Taz Olson from Prairie City, South Dakota was the most successful. Olson had a time of 3.7 for the win. Kelsie Domer, from Dublin, Texas, stopped the clock in 2.3-seconds to win the breakaway roping. Shad Mayfield, from Clovis, N.M., won the world title in tie-down roping just down the road at the 2020 Wrangler National Finals Rodeo in Arlington. He had the fast time in Dickies Arena on Friday night, 7.4 seconds, and is on track to win his first FWSSR title.

Zach Kilgus from Stephenville and Jake Edwards from Fort Ann, New York were tops in team roping. Edwards won the inaugural FWSSR Pro Rodeo Tournament in 2020 and is fulfilling a big goal by getting back here. He came through the qualifying system and got in because of his success at the Cleburne, Texas rodeo.

Two-time FWSSR barrel racing champion Hailey Kinsel of Cotulla, Texas is poised to win it again. She and her great mare, DM Sissy Hayday, “Sister” stopped the clock in 16.26 to win Semi-Finals B. She could make history here if she wins this rodeo for the third consecutive year.

Each of Friday night’s winners earned a $4,000 check and the best of the field will face the best of Thursday night’s field on Saturday. The Championship Finals will start at 7:30 on Saturday where the fastest time or highest score will win the title and a big check for $20,000.

The 125th edition of the Fort Worth Stock Show & Rodeo winds down on Saturday and as a “thank you” to the citizens of Forth Worth and North Texas, everyone will receive free grounds admission.

FORT WORTH, Texas — The following are unofficial results from the FWSSR ProRodeo Tournament’s Semi-Finals Round at the Fort Worth Stock Show & Rodeo, Friday, February 4, 2022. (Qualifiers are based on tie-breaker rules.)