Former national collegiate breakaway champion Macy Fuller of Morristown, Arizona, drew the best calf in the finals and made it count on March 17 at the Charlie 1 Horse All-Girl Challenge Breakaway.

“I was pulling at the line for all I was worth, because he was slicked-off and small like he would be fast,” said Fuller, 28, whose 3.5-second effort won the round and bested 150 other ropers on three.

After the top two call-backs suffered no-times, Fuller clinched the three-head aggregate title with her 12.02-second total to earn $12,000 cash and a truckload of prizes. She said she wasn’t too nervous.

“I’m a very docile person,” she said. “I even had to look on my phone to see how many calves we had to rope here. I’m just there to rope when they call my name; I don’t think about the money; I just want to do my job and want my horse to work good.”

She was riding a bay horse called Boomer that her family raised out of her old barrel racing mare. The bay gelding won money at barrel futurities until ulcers derailed his pattern.

“I’ve done everything with him,” said Fuller of Boomer, who was intended as a barrel horse thanks to his Judge Cash blood. “I sold my other horse that I used at the NFR because I kept hauling this one and never rode him.”

The hefty paycheck was more money than Fuller made at December’s National Finals of Breakaway, after which she was the 10th-place breakaway roper in the world. Fuller, who won the College National Finals Rodeo in 2014, also nominated the Charlie 1 Horse Breakaway toward the WCRA leaderboard in hopes of a return trip east to Texas in May.

“We live in the wrong spot, but I absolutely love where I live,” said Fuller, a self-professed ‘Arizona girl’ whose parents produce team ropings in Wickenburg.

She plans to hit as many rodeos as she can this season without hauling Boomer’s legs off, while possibly entering some mixed team ropings at amateur rodeos in the Midwest. Back home, she also has about four 4-year-old colts to get going. She used the “unbelievable” number of breakaway jackpots in Arizona this winter to help season Boomer. 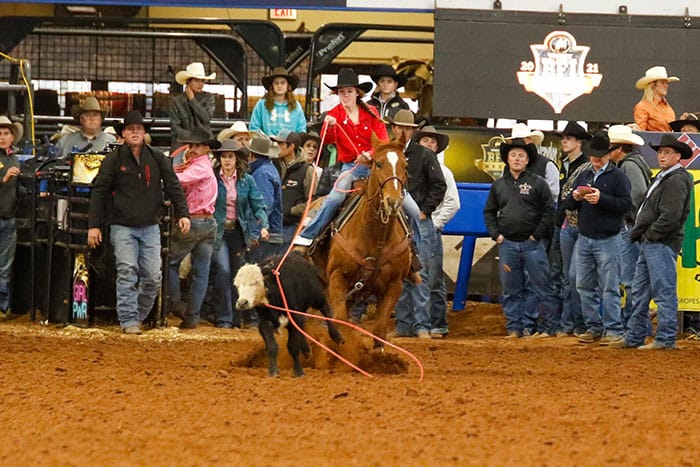 For the first time ever, the Charlie 1 Horse Breakaway included a Junior Incentive for ropers 18 and younger. Seventeen-year-old Kylee Herrin of Kemp, Texas, jumped out and won the first round, then finished sixth in the main roping to earn first place in the Incentive, bringing her Guthrie total to $4,500.

Herrin, a home-schooled senior in high school, has spent weeks staying with world champs Kelsie Chace and Jackie Crawford to hone her craft, and plans to move to Stephenville this summer upon graduation so she can rope professionally.

“I didn’t think I had a chance to win, but wanted to enter the Open to get a feeling of competing and not getting scared of these girls,” she said. “I used to have panic attacks. But I felt real confident in myself. I’ve never won anything big before and this is my second buckle ever!”