Courtesy of the WPRA/WPRA/PRCA photo by Joe Duty 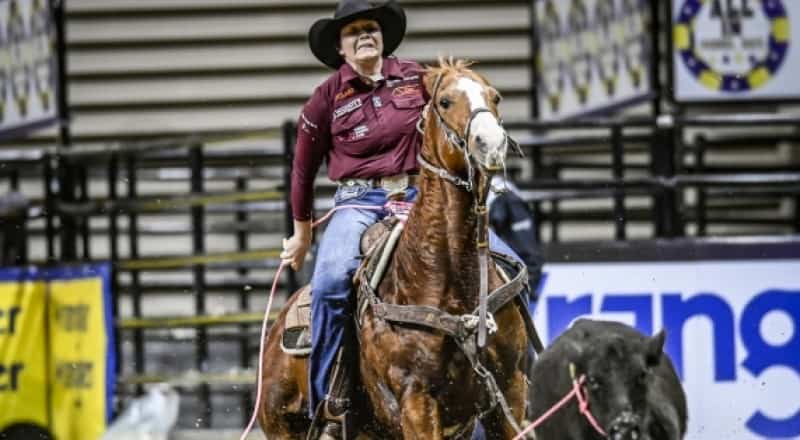 It was a two horse race from July to December with Shelby Boisjoli and Sawyer Gilbert battling back and forth. Boisjoli entered her second Wrangler National Finals Breakaway Roping as the No. 1 roper following her big win at the ProRodeo Tour Finale in Salinas.

Boisjoli held that spot until the 10th round of the Wrangler NFBR at the Orleans Arena when Gilbert moved in front by $86.32. Boisjoli was leading the average until a no time in the eighth round opened the door for Gilbert to win her first gold buckle. She didn’t let that opportunity pass and not only won the world but went ahead and won the average title as well in a total time of 46.30 seconds on 10. Actually, Gilbert was the only lady in the top 15 to rope all 10 head.

“That is one of my strengths as I can always catch,” said Gilbert about the average title. “I told myself even if I broke a barrier to get all 10 roped and this means the world to me.”

“Holy cow,” responded Gilbert when she learned she had won the world. “I knew I could do it and just wanted to catch that last calf. This has been a dream before I even knew it was possible on this big stage. I am so honored and glad to get it done.”

Taylor Munsell, former college coach, finished third in the world with $57,896 after finishing second in the average in a time of 25.10 on nine head.

Kelsie (Chace) Domer and Gilbert got things started on the final day of the National Finals Breakaway Roping winning the sixth round after stopping the clock in 2.0 seconds. They each added $3,949 to their bank accounts.

The time of 1.8 seconds was the sweet spot for the seventh, eighth, ninth and tenth rounds as that was the winning time for each. The seventh round won by Martha Angelone was just a tick off the fastest time of the event which came in the fourth round by Joey Williams with a 1.7. It would be Williams that took the eighth round victory lap after turning in her own 1.8 second run. Domer and Munsell were second in 2.1 seconds.

The ninth round was won by Cheyanne Guillory and Angelone with identical 1.8 second runs. Danielle Lowman a proud representative of the Navajo Nation was third in a time of 1.9 seconds.

She waited until the end like she did last year at the NFBR but better late than never. Seventeen time WPRA World Champion JJ Hampton took the 10th round win with her own 1.8 second run.

Another first for Gilbert was the average title as during the 2020 Wrangler NFBR an average was not awarded so she became the inaugural average champion.