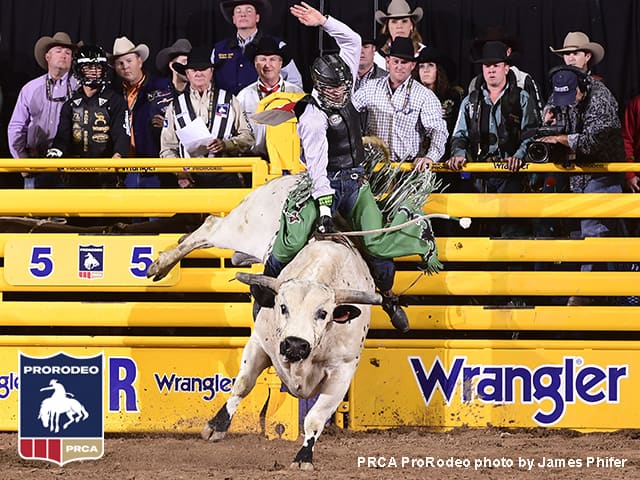 COLORADO SPRINGS, Colo. – Battling through injuries is part of the job description for PRCA bull riders.

“It’s definitely nice to get back to the NFR because it’s your chance to make money,” said Askey, 31. “You try not to (sweat the injury), but you can’t help it a little bit.”

Askey suffered the injury when he was bucked off D&H Cattle Company’s Margin Call at the Lawton (Okla.) Rangers Rodeo, Aug. 9. At that point, he was 10th in the Aug. 12 world standings with $89,790.

“I went home for a couple of weeks and came back and wore a brace and went back to rodeoing,” Askey said. “It was one of those things where I thought if you are going to make it, you will make it and if you don’t, life will go on.”

The first time Askey competed at the Thomas & Mack Center in Las Vegas, he rode one bull and earned $25,654. He finished 11th in the world standings.

A year ago, Askey finished a career-best fifth in the world standings with $225,624. He had a solid Wrangler NFR, placing in all five rounds that he made the whistle. He finished third in the average and earned $118,237 at the Wrangler NFR.

Askey, who is living in Eustace, Texas, about an hour east of Dallas, stays active outside the rodeo arena by going hunting for hogs and coyotes. He and his wife, Tianti, were married Nov. 2 in Weatherford, Texas.