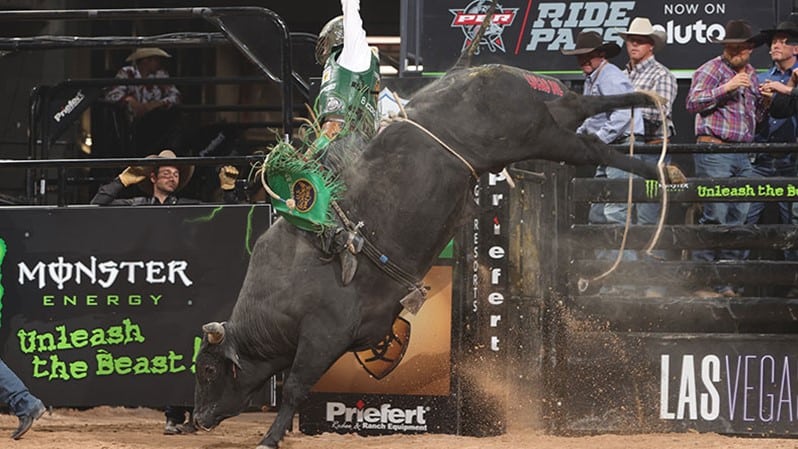 PUEBLO, Colo. – Juju still has a ways to go to live up to the hype and legacy of his father, three-time World Champion Bull SweetPro’s Bruiser, but he is starting to gain steam similarly to how Bruiser’s career began.

As his father did six years ago, Juju claimed an ABBI Classic Championship. Two strong outs at the 2021 PBR World Finals helped him finish the season with an impressive 727.2-point total from his Top 6 regular-season outs and two trips at the Finals.

“He is usually right there to the right and just kicks and bucks,” H.D. Page of D&H Cattle Company said. “It was his to lose going into the Finals. He gives riders every opportunity to ride him, but they don’t always do.”

At the World Finals, Juju, who earned $100,000 for the ABBI Classic title, teamed up with two of the best bull riders in the world for two 90-point bull rides.

2016 World Champion Cooper Davis first rode Juju for 90.75 points to finish second in Round 1 behind Eli Vastbinder (91 points on Manaba).

It was a ride that some, including Davis, believed may have been good enough to win the round.

“That bull bucked real hard, and I thought I would be winning the round,” Davis said in Vegas. “That bull is just really stout, and he had enough time for me to barely catch up to him and set my hips just in time to not get jerked down. When you have one of D&H’s, you have a chance to win, and I didn’t want to let it slip through my fingers.”

Vastbinder then helped Juju clinch the ABBI Classic Championship when the two teamed up for a 90-point bull ride in Round 4.

Vastbinder previously had ridden Juju for 89.5 points in Round 1 of the Iron Cowboy competition in Fort Worth, Texas, this past August.

“That is a bull I will probably always remember,” Vastbinder said. “I rode him twice for two big scores and two big paydays. I am really good friends with H.D. and that family, so it was pretty special for both of us to win.”

Juju was certainly good luck for Vastbinder, and Page joked that maybe he was searching for a lucky charm, too, when he decided to name his bull Juju.

“I just wanted some good juju or something, I guess,” Page said before laughing. “I don’t remember why he got named that.”

This season, Juju bucked eight times on the Unleash The Beast, going 4-4 with an average bull score of 44.53 points.

Juju began the season with four buckoffs before being ridden in his final four outs. His best out to date came in March when he bucked off Lucas Divino in 1.75 seconds for a 45.75-point bull score.

An ABBI Classic Championship is usually a prime indicator of potential future success for a bull.

Juju was not the only D&H Cattle Company bovine athlete to take home some hardware at the World Finals.

Liston (D&H Cattle) was anointed the 2021 ABBI Finals Classic Champion, collecting a $100,000 payday of his own. Liston clinched the title courtesy of his 89.2-point effort in Round 1 of the PBR World Finals, followed by his 91.8-point trip in Round 4.