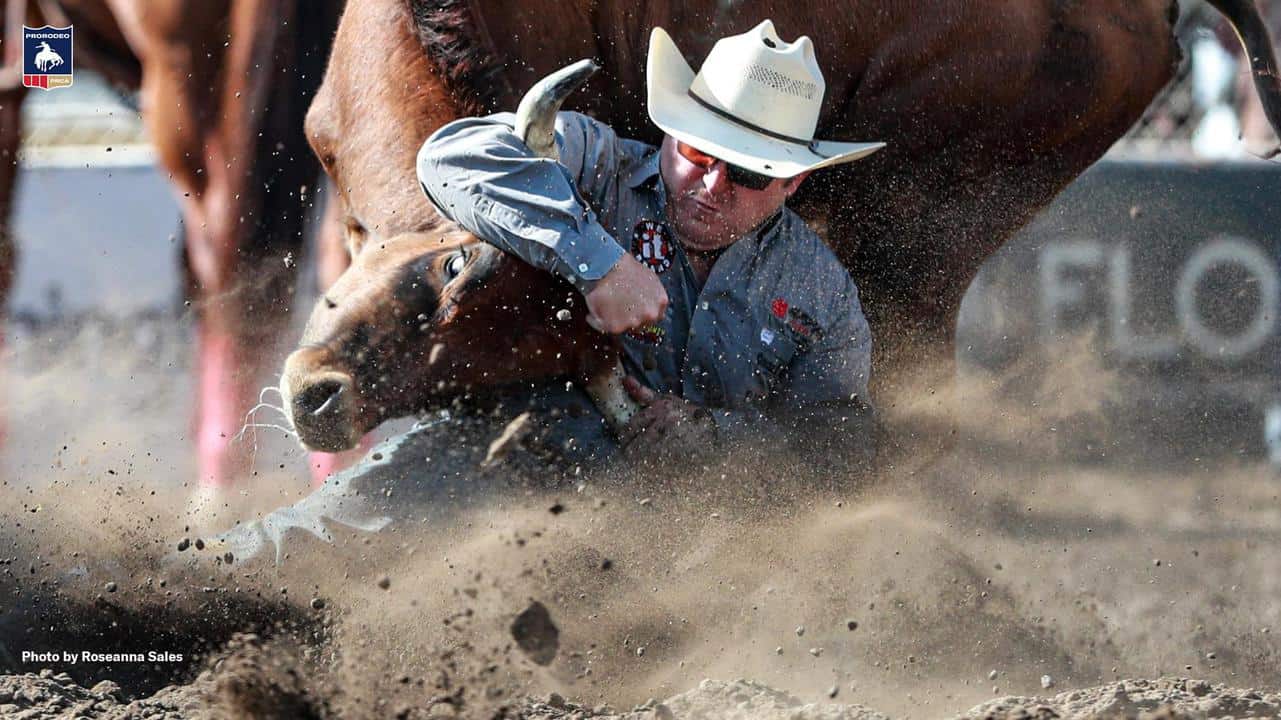 Coming off a win at the Lewiston (Idaho) Roundup, steer wrestler Dylan Schroeder is feeling hopeful about the last few weeks of his season.

And he said he has his friends’ horse, Pepp, to thank for the 3.8-second victory.

“I was riding Gabe and Gavin Soileau’s horse (Pepp). He’s good in the box so I knew he was going to let me take the start I wanted to, and after that it all kind of just fell into place,” Schroeder said.

Having a good horse on the road with him has made all the difference. Now, Schroeder can focus on his mindset and leave the rest up to Pepp.

“(Riding Pepp) lets me just focus on the steer wrestling part of it and go into every rodeo like it’s the last one and go for it,” said Schroeder, who earned $3,387 in Lewiston.

This is Schroeder’s second season on the ProRodeo circuit, bringing a noticeable difference in his mindset and performance. He’s already more than doubled last year’s earnings and has his eyes on the ProRodeo Tour Finale, set for Sept. 23-26 in Salinas, Calif.

With only a few rodeos left on his schedule, and needing to pick up points, a win in Lewiston was valuable. He entered the weekend 48th in the standings on the ProRodeo Tour presented by Pendleton Whisky.

“We’re right on the edge of getting in the Tour Finale, so hopefully we get in there. (I have to) do well at Pendleton (Ore.) and Albuquerque (N.M.),” Schroeder said. “We’re in Puyallup (Wash.) tonight. We went a little long to get into the short round, but we’ll get some Tour points which will be good.

“Hopefully we can sneak in this Tour finale.”

The check from Lewiston will be Schroeder’s first since the Caldwell (Idaho) Night Rodeo Aug. 17-21. Before the win, Schroeder was 26th in the PRCA | RAM World Standings with $38,774.

Though he admits the last week or so has been slow, Schroeder said he’s gotten used to battling through the highs and lows of the long season.

This season has been especially competitive, said Schroeder, making it even more difficult to be a consistent money winner.

“It’s just been kind of a slow grind,” he said. “You get in slumps, and you just have to know that you belong and just wait until you draw a good one and capitalize on it.”

Schroeder is hoping for more steers like his in Lewiston and more opportunities to capitalize on. His goal for the remainder of the season is to stay hot.

“(A win) feels good coming into the end of the year too because I’m trying to fight to the end, get right inside the top 20,” he said. “That would be good at the end right here, get on a hot streak going into Pendleton and Albuquerque, finish the year off strong.”