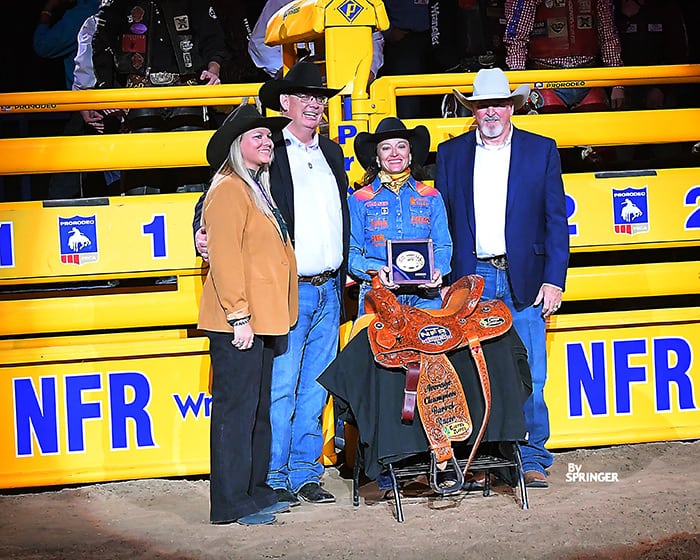 LAS VEGAS, NEVADA – Jordon Briggs is definitely following in her mother’s footsteps. She added two very impressive titles to her name at the 2021 Wrangler National Finals Rodeo winning the average title and the world title.

Briggs of Tolar, Texas, not only won the average but set a new NFR average record inside the Thomas and Mack with a total time of 136.83 on 10 runs, surpassing Nellie Miller’s record of 137.32 set in 2017. 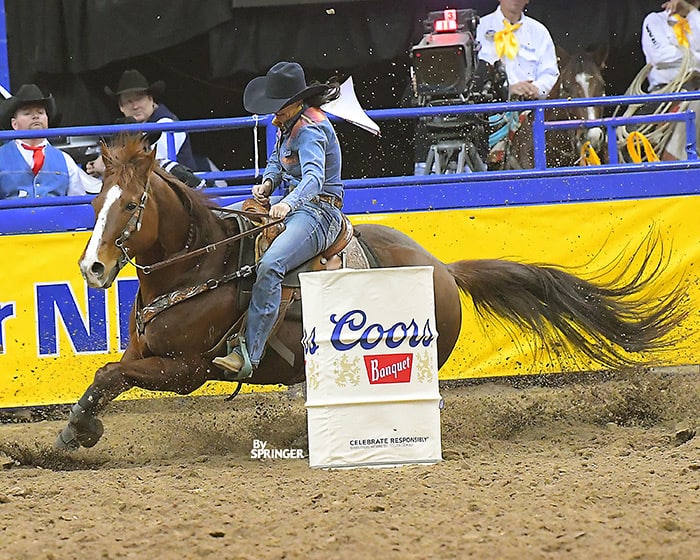 “Oh man it means a lot,” said Briggs of the average title. “That was my goal coming into here. I knew I had the horse that could do that and he did it. I had so many people cheering for me. I even had bull riders I have never met cheering for me. It was great. I felt a lot of power behind me and didn’t want to let anyone down and my horse never does.”

She definitely had the horse which was Famous Lil Jet “Rollo” that also won Horse of the Year honors in 2021. In fact, Rollo has not hit a barrel all year long. Talk about impressive. Briggs knows a thing or two about the importance of an average title as her Hall of Fame Mother Kristie Peterson won five in a row in the Thomas and Mack from 1994-1998.

“I am a very average minded person and that is why this was my goal,” noted Briggs. “I was really disappointed the first year I made it that I didn’t place in the average. That is what I had out for blood this trip was that average title. And to set the average record was icing on the cake.”

She also made history by becoming the first mother-daughter duo to ever win a WPRA World Title. Kristie won a total of four in her career. Briggs edged Hailey Kinsel for this year’s title when Kinsel was looking for her fourth title. Briggs ended the year with $297,460 while Kinsel was second in $281,156.

“I can’t even believe it,” said Briggs about her first world title. “I am speechless about the world title. I don’t think it will really set in until I am out on that stage with everyone else. This week has been a dream come true.”

Molly Otto finished second in the average in a time of 145.11 but walked away earlier in the night with the Jerry Ann Taylor Best Dressed Award given by the WPRA and the National Cowgirl Museum and Hall of Fame.