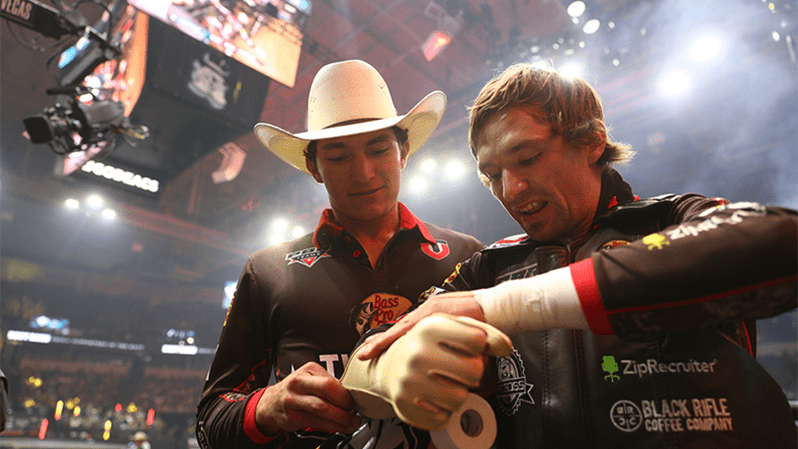 WINSTON-SALEM, N.C. – The Carolina Cowboys delivered a performance that won’t soon be forgotten Saturday evening inside LJVM Coliseum in Winston-Salem, North Carolina. Registering a walk-off win against the Arizona Ridge Riders, the Cowboys overtook the No. 1 rank in the PBR (Professional Bull Riders) Team Series standings.

In a game that was decided by the final outs, reigning PBR World Champion Daylon Swearingen (Piffard, New York) delivered the go-ahead score as the Cowboys’ closer. His 87.75-point ride atop Jailhouse Cat (Clark View Farms/Phillips) not only earned his team their sixth-consecutive game win, but also allowed them to leapfrog the Ridge Riders for the No. 1 position in the league.

The Carolina Cowboys are now not only atop the league standings, but also lead the PBR Cowboy Days event standings as one of three teams to be a perfect 2-0 thus far in the Tar Heel State.

The Kansas City Outlaws also remained perfect in game play Saturday evening, besting the Texas Rattlers, presented by Ariat, 171-167.5 to improve to 2-0 and rise to second on the event leaderboard.

The Missouri Thunder logged their first win in North Carolina, beating the Nashville Stampede 252.25-246.75 in the highest-scoring game of the electric evening.

PBR Cowboy Days concludes Sunday, September 11 at 1:45 p.m. ET. Tickets are still available and can be purchased online at Ticketmaster.com and PBR.com, at the LJVM Coliseum Box Office or by calling PBR customer service at 1-800-732-1727.

On Sunday, September 11 the festival will open at 10:00 a.m. at the Winston-Salem Fairgrounds. Cowboy Church will commence at 11:00 a.m. on the Tractor Supply Co. broadcast trailer, led by Robby Dilmore, while also featuring bull rider testimonials and remarks from Richard Childress.

PBR RidePass on Pluto TV will offer replays of all the PBR Team Series action from Winston-Salem, North Carolina. Check https://pluto.tv/en/live-tv/pbr-ridepass for the latest programming schedule.

In a game during which each team went 3-for-5, covering 60% of their bovine athlete opponents, the Missouri Thunder held off a late surge by the Nashville Stampede to register their first game win during the PBR (Professional Bull Riders) Team Series event in Winston-Salem, North Carolina, 252.25-246.75.

From the moment the first chute gate burst open, the battle between the two teams was ferocious. As the lead off rider for the Thunder, Andrew Alvidrez (Seminole, Texas) was first to convert, covering Savage (Blake Sharp/Michael Floyd/High Voltage Cattle) for 83.75 points.

The Stampede, however, were quick to respond, concluding the first within 2.5 points of the event lead as 2018 PBR World Champion Kaique Pacheco (Itatiba, Brazil) rode Air Dippin (Wagoner Ranch/Rowdy Rein Ranch) for 81.25 points.

The Thunder continued to ride red-hot in the top of the second, as Adriano Salgado (Batatais, Brazil) added 84.25 points to his team’s lead when he conquered Modified Hou (Cowtown Rodeo).

While the game began with three consecutive rides, the Stampede were the first to misstep, concluding the second round of outs with a buckoff when Ryan Dirteater (Hulbert, Oklahoma) was dispatched in a hard-fought 7.48 seconds by Smooth Steel (Flying C/Flying P Bucking Bulls).

As the third got underway, surging Aussie Callum Miller (Warwick, Queensland, Australia) was unable to continue the Thunder’s momentum, logging the team’s first buckoff when he was sent to the dirt in 2.05 seconds by Spice (Flying C/Flying P Bucking Bulls).

Taking advantage of the stumble, the Nashville Stampede inched within 2.25 points of the lead as Matt Triplett (Canton, South Dakota) closed out the third with a game-best 84.5-point ride atop Red Redemption (Fabulous IV Ranch/Josh & Dalton Walling).

With just two outs remaining for each team, Cody Teel (College Station, Texas) righted the ship for the Thunder, expanding his team’s lead to 86.5 points when he reached the requisite 8 aboard Coy Dog (Fabulous IV Ranch/Josh & Dalton Walling) for 84.25 points.

The back-and-forth exchange of scores, however, came to an end in the bottom of the fourth when Thiago Salgado (Navirai, Brazil) proved no match for Whiz (Flying C/Flying P Bucking Bulls), bucked off in 4.24 seconds.

After the see-saw game, the fate of the Thunder and Stampede, both of which lost on the opening night of PBR Cowboy Days, came down to the fifth.

First up was the Thunder’s closer, Colten Fritzlan (Rifle, Colorado). With the chance to clinch the game win, Fritzlan failed to capitalize, bucked off by Homer (JR Phillips) in a quick 2.37 seconds.

Consequentially, for the third time this season, three-time PBR World Champion Silvano Alves (Pilar do Sul, Brazil) was in the position to deliver a walk-off win for his team.

Initially matched with Bart (Cowtown Rodeo), Alves reached the whistle, but the 64-point trip was awarded a re-ride. Needing 86.75 points to win, the Stampede took the re-ride, with Alves next tasked with Sugar Boom Boom (Cornwell Bucking Bulls/Circle G).

While Alves remained in control despite a late direction change, his 8 seconds of work were awarded just 81 points, short of what was needed to earn the win.

During the final round of games for PBR Cowboy Days on Sunday, September 11, the Missouri Thunder will look to continue their winning ways when they play the Texas Rattlers, presented by Ariat, while the Nashville Stampede will look to snap their six-game losing streak when they take on the host Carolina Cowboys.