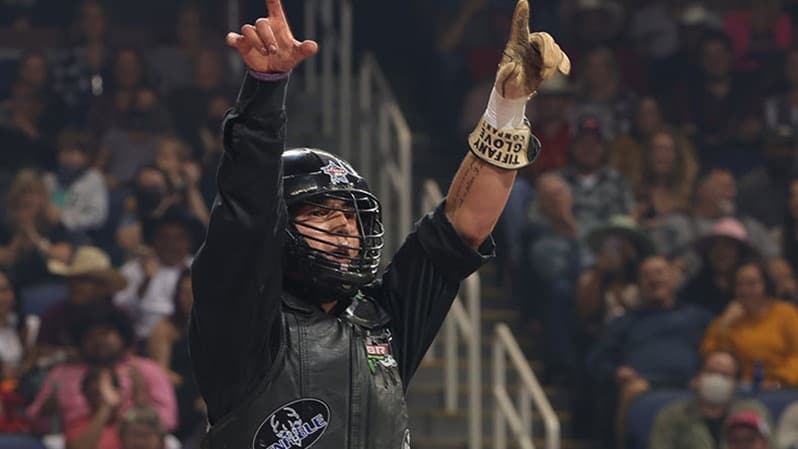 PUEBLO, Colo. – Mauricio Moreira was 0-2 against I’m Legit Too heading into this weekend’s PBR Union Home Mortgage Invitational, presented by Bass Pro Shops, but his father told him it was time to rodeo and finally conquer the Hart Cattle Company bovine athlete.

Moreira took his father’s encouragement to heart and rode I’m Legit Too for a season-high 90.75 points to win his second career 15/15 Bucking Battle this weekend at Greensboro Coliseum.

“I think I was ready to ride him today because last two times he bucked so hard, like 46 points, and today my dad say for me, ‘Third time you ride him, you need to rodeo him tonight,’” Moreira told CBS Sports’ Kate Harrison. “I ride him like I know how to ride him tonight.”

Moreira earned 59 world points with the 15/15 Bucking Battle victory. He will head into next weekend’s PBR Monster Energy Invitational in Manchester, New Hampshire, ranked seventh in the world standings. However, Moreira is listed as questionable by Dr. Tandy Freeman with a right hip injury after he was bucked off by Mr. Nasty in 4.75 seconds Sunday in Round 2.

“I just want to ride bull for bull because it is less than 30 days before Finals,” Moreira said on Saturday night. “My head is so good to ride bulls. I want to go there riding like this and have fun riding bulls.”

Moreira was one of three riders to post a qualified ride in the 15/15 Bucking Battle.

Alves also got vengeance as Detroit Lean has previously bucked him off in two prior meetings.