Barrel racer competes even with paralysis; will run at the Red Bluff Round-Up 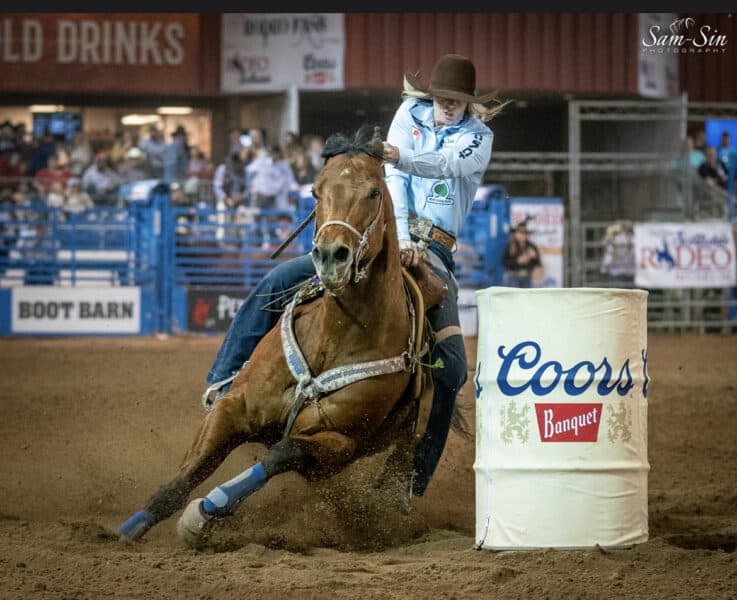 Barrel racer Amberley Snyder will compete at the Red Bluff Round-Up this week. The Utah woman, who is paralyzed from the waist down, does not let her paralysis get in the way of living life. Photo by Fernando Sam-Sin.

Red Bluff, Calif. – A barrel racer who has overcome tremendous odds will compete at the Red Bluff Round-Up this weekend.

Amberley Snyder was driving to a rodeo in 2010 when she had a vehicle accident which changed her life forever.

She became paralyzed from the waist down, at the age of nineteen.

But it didn’t stop her. Four months after the accident, she was back on a horse.

Snyder, Tremonton, Utah, grew up in southern California and began rodeo at a young age. At the time of the accident, she was serving as the Utah FFA State President and competing in high school rodeo.

But the accident didn’t stop her.

She graduated from Utah State University with a bachelors degree in agriculture education, then a masters degree in school counseling. 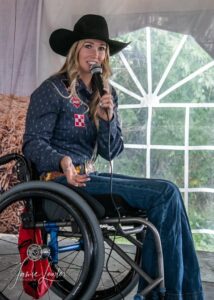 Amberley Snyder uses the accident that paralyzed her from the waist down to motivate and influence others through her speaking engagements around the nation. Photo by Jamie Lawler.

Her accident and paralysis give her a unique perspective, which she shares with audiences across the nation.

Snyder speaks to groups of all kinds, including at a California high school rodeo held at the Tehama District Fairgrounds in January. She does 40 to 50 speaking engagements a year, everything from youth to adults. It’s something she enjoys. “I love speaking, and I hope to get to speak my entire life,” she said.

The paralysis hasn’t stopped her from running barrels, either. She’s had her Women’s Pro Rodeo Association membership for five years and last year, finished in the top twelve in the Pro Rodeo Wilderness Circuit.

And she’ll compete in Red Bluff as well.

Her friend and travel partner helps her saddle her horse and get into the saddle. She is able to ride with the help of a seatbelt-like contraption on her saddle, which holds her in.

“It’s pretty neat that I get to compete like everybody else,” she said. “It’s definitely my happy place, on the back of a horse.”

This is the first time Snyder has competed at the Round-Up. This year, she’s decided to do the “California run” – the six spring rodeos held in the state in April and May. She missed Oakdale last week, due to scheduling conflicts, but after Red Bluff, will compete in Clovis, Lakeside, Springville, and Stonyford.

She’s grateful she’s still able to rodeo. “It’s definitely not an easy sport but it’s something that I fell in love with when I was a kid,” she said. “Even when it’s hard, there’s that little girl inside of you that still loves it, so you keep trying.”

It’s not just rodeo that’s hard, but life in general when you’re paralyzed from the waist down. Snyder uses her life examples as lessons for others.

“We all have challenges and others’ might not look like mine, but God has given us the tools to overcome and have the strength to work through the challenges that are in your path.

“If you can trust where you’re supposed to be and that God has a plan, that’s good. It doesn’t make it easy, but it takes away the ‘what-ifs.’”

Snyder will compete twice in Red Bluff; the first time will be during slack on April 15, which begins at 9 am. The second time will be dependent on where she is ranked after her first run. Her second run might be on Friday, or it may occur in the performances, which take place April 15-16-17.

Tickets are $20-$40 and can be purchased online at RedBluffRoundup.com, at the Round-Up office, and at the gate. For more information, visit the website or call 530.527.1000.