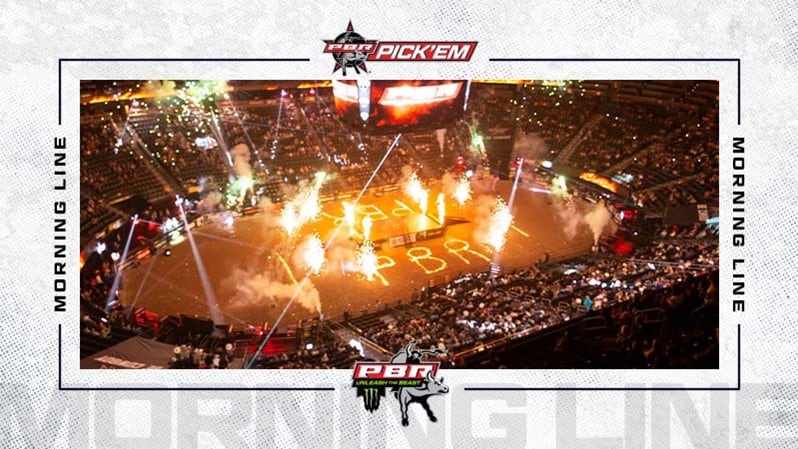 They rode three bulls in last night’s very tough 15/15 Bucking Battle. The 15 bulls out tonight are a step nicer, but quite a few guys drew bulls that go away from their hand. Dener Barbosa had the best-looking matchup in the round last night but didn’t convert. He actually drew a lot tougher here. 08B Hostage is similar to I’m Legit Too but hasn’t allowed a qualified ride since November of 2020.

The three guys who stayed on last night were Kaique Pacheco, Mauricio Moreira and Dalton Kasel.

Moriera has a solid draw here in 94 First Down, but one that’s likely to go away from his hand.

Pacheco has a bull called Moonwalk, who is 12-0 overall. However, Pacheco is riding well and beat the odds on another bull with “moon” in his name last night. Pacheco has ridden his last six UTB bulls in a row and eight of his last nine.

Kasel won the 15/15 last night in a tough pen of bulls, and he might win this one too. This is a prime draw for a left-handed rider. Kasel was 90.5 points on him in January in Sacramento. This bull is 1-5 against lefties overall.

Kyler Oliver, Joao Ricardo Vieira, Eduardo Aparecido and a few others have bulls that will probably go away from their hand.

While the Top 15 riders turned down the bull power from last night, the 30 riders in Round 2 of the qualifier event went the other way. This is a tougher pen of bulls than we saw in Round 1. They rode nine bulls last night and may ride fewer than that tonight.

Sam Woodall won Round 1 with a big 92-point ride on a debut bull. He has 637D Border Crisis here – a bull that is 5-1 in his career and was ridden by Bob Mitchell in Glendale a couple of weeks ago.

Adriano Salgado turned down a re-ride last night and kept a low score. He has a good matchup here with 688 American Gangster. He won the Velocity event in Fresno last week, and he also turned down a re-ride there and kept a low score. Everyone else helped him out by bucking off at least two out of three of their bulls. That’s only a viable long-term strategy when your competition consistently rides below 33% and riding two of three at a single event is rare. At this level, it is not.

Ramon de Lima on 169 Sky Harbor and Cody Jesus on -51 Skeeter Peter are both interesting matchups. Both guys stayed on last night and have a chance here. These two pairings are pretty typical of this round. There are a lot of good bulls, and many riders have challenging but winnable matchups. Cody Teel, Derek Kolbaba, Brennon Eldred, Brady Fielder, and Joao Henrique Lucas are all in the same situation.

A veteran bull who is very rideable. Divino bucked off in Round 1 but has been riding pretty well recently.