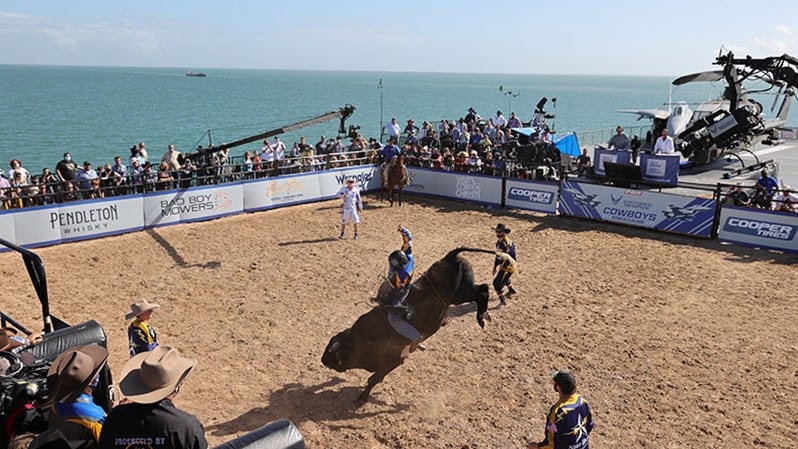 CORPUS CHRISTI, Texas – For the second iteration of its annual elite-level charity event, PBR (Professional Bull Riders) will return to what many consider the “coolest” and most unique location where the organization has bucked bulls – the deck of a historic U.S. warship. The PBR Air Force Reserve Cowboys for a Cause follows up its inaugural event from 2020 with a return visit to the USS Lexington on Saturday, September 4, 2021.

While the team-based competition will raise funds for charity to be named following the blueprint from 2020, the exhibition event will be even bigger and better by expanding the number of teams and rides. In 2021, Cowboys for a Cause will feature eight teams of three riders each, providing nine more chances for rides and wrecks in the long round. The top two scoring teams will be brought back for a six-rider championship round and the event win.

The exhibition event will include the opportunity for world points for the riders, unlike last season’s event. The one-day event will offer riders points equivalent to a 15/15 bonus round in Round 1 and ride-score bonus points in the championship round.

Fans who aren’t able to attend the limited access VIP event will be able to see the most unique PBR event of the season on CBS on Sunday, September 5 at 2 p.m. ET.

PBR – the world’s leading western sports league – will once again construct a bull riding arena on the 910-foot-long flight deck of the famous “Blue Ghost” aircraft carrier. Bringing in over 750,000 pounds of dirt and steel, along with more than 15 miles of cables to support the event and broadcast aboard the vessel requires a trip five stories above the waves via the ship’s still operational aircraft elevator. The top bovine athletes of the PBR will also follow the same path as aircraft being brought up during the heat of battle from the bowels of the legendary ship.

PBR will be offering exclusive VIP packages for a limited number of guests, ranging from event tickets with a pre-event brunch, merchandise and more, to full weekend travel packages including a day of service, concert, dining, tours of the USS Lexington and more. Packages can be purchased by calling 800-732-1727 or online at PBR.com.