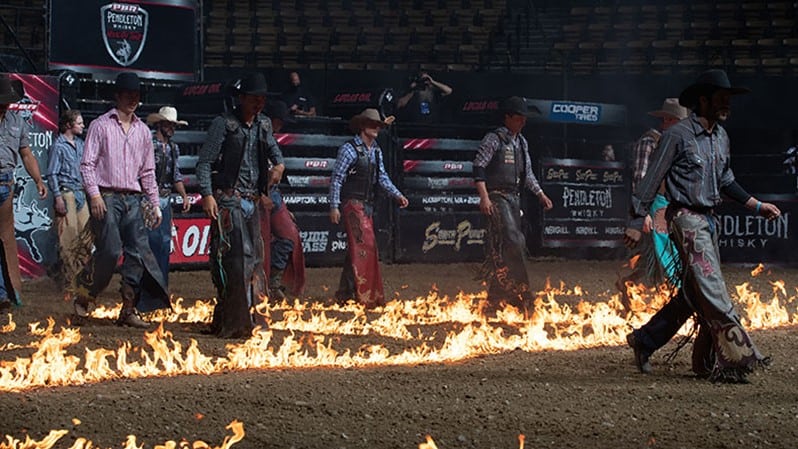 HAMPTON, Va. – Host to one of the PBR (Professional Bull Riders) Pendleton Whisky Velocity Tour’s longest-tenured events, Hampton, Virginia, will welcome the organization’s expansion series for the ninth consecutive season on March 5 when the PBR Hampton Classic takes over the Hampton Coliseum.

Last season, as the only rider to go a perfect 2-for-2, Marcos Gloria (Central de Minas, Brazil) captured his first Velocity Tour victory, winning the eighth iteration of the PBR Hampton Classic.

While the event was largely dominated by the fierce bovine athletes who make up half of every qualified ride score, Gloria initially broke through in Round 1 of the Old Dominion State event when he covered Quarter After for 88.5 points.

Gloria then clinched the win when he dominated the championship round courtesy of his 88-point trip on Wade Rock.

Gloria earned a much-needed 41 points for his efforts, surging to No. 58 in the world standings.

Hampton’s most recent PBR tour stop was one of 24 regular-season events that helped shape one of the fiercest races for the Pendleton Whisky Velocity Tour in PBR history.

While Virginia native Michael Lane (Tazewell, Virginia) held the No. 1 position in the standings for the majority of the season, he was surpassed during the last out of the year when Adriano Salgado (Batatais, Brazil) used a runner-up finish at the Pendleton Whisky Velocity Tour Finals to surge to the top ranking in the standings.

The Brazilian newcomer Salgado finished a slim 26.5 points ahead of No. 2 Lane, who could not compete at the year-end event due to injury.

The bull riding action for the 2022 PBR Hampton Classic begins at 7:00 p.m. EST on Saturday, March 5, at the Hampton Coliseum.

On Saturday evening, all 40 competing riders will attempt one bull each in Round 1. Following the opening round, the Top 10 will then advance to the championship round, where they will attempt one final bull, all to be crowned the event champion.

Tickets for the one-day event go on sale Wednesday, December 1 at 10:00 a.m. EST and start at $15, taxes and fees not included. Tickets can be purchased online at ticketmaster.com and PBR.com, at the Hampton Coliseum Box Office, or by calling PBR customer service at 1-800-732-1727. For those fans interested in purchasing at the Hampton Coliseum Box Office, please visit HamptonColiseum.org for information on making an appointment, operating hours and more.

PBR VIP Elite Seats are available for $195 for avid fans who want an exclusive VIP experience while enjoying the world’s top bull riding circuit. These tickets offer the best seats in the venue, a question-and-answer presentation with some of the top bull riders and stock contractors in the world, $10 concession voucher, souvenir credential and lanyard, and pre-event photo opportunity from the dirt.

For an enhanced PBR experience, fans can purchase add-on PBR Premium Experiences which will include the Elite Experience on Saturday, March 5.

For more information on PBR Premium Experiences or to purchase the Elite Experience for the PBR Hampton Classic in Virginia, visit https://pbr.com/tickets/premium-experiences/.