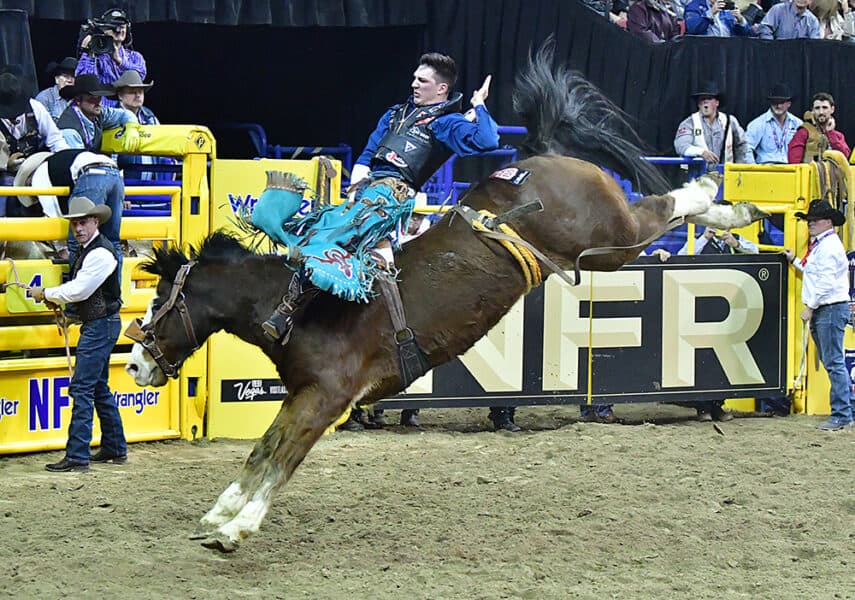 Jess Pope rides J Bar J’s All Pink for 88.5 points to win Wednesday’s seventh round of the Wrangler National Finals Rodeo. It is his third go-round win of this NFR.
(PHOTO BY ROBBY FREEMAN)

LAS VEGAS – Not everyone clocks in to work the way Jess Pope does.

Pope has placed in six of the first seven rounds, including three go-round wins. He is No. 1 in the seven-ride aggregate with a cumulative score of 615 points, and he’s pocketed just shy of $130,000.

That’s a heck of a payday for a week of work in the Nevada desert.

“There are 15 guys here that ride bucking horses outstanding,” said Pope of Waverly, Kansas. “My job is to show up every day and take it one at a time. That’s what I’ve done. It’s a separate rodeo all 10 nights. Tomorrow I’ll show up for one, and once it’s over, it’s over. I’m excited to see what the rest of the week is going to bring and see what happens.”

“I was really excited to have that horse,” Pope said. “She used to be a TV-penner, so I knew she was going to be really good for this round. I was tickled pink to have her.”

The “TV Pen” features the most electric bucking horses in rodeo, and it’s dubbed that way because of how the NFR was broadcast years ago – it was only shown during the 10th round. The TV Pen bucks in the fifth and 10th rounds still.

“These horses were the buckers,” he said. “Our pens are so close together, and they dang sure buck. There are a couple in there you can consider eliminators. Our TV Pen is pretty much buckers that get a little more up in the air.”

Pope won the aggregate title a year ago during the championship’s one year in Arlington, Texas, because of COVID restrictions in Nevada. While he’s a two-time qualifier, this is his first venture to the NFR in Las Vegas.

“I’ve had a lot of fun,” Pope said. “Texas is a whole lot different than Vegas. There is a whole lot more electricity. It is compact and it is fast. I really like it. It doesn’t give me much time to think about what is actually happening; you just have to react to it.

“There are 17,000 people in the stands that pay a ticket to get in here; I want to make sure they get the best show that they possibly can.”

He takes a blue-collar work ethic with him in the arena, but he also recognizes the showmanship that happens when big-time bucking horses are matched with the world’s greatest bronc busters.