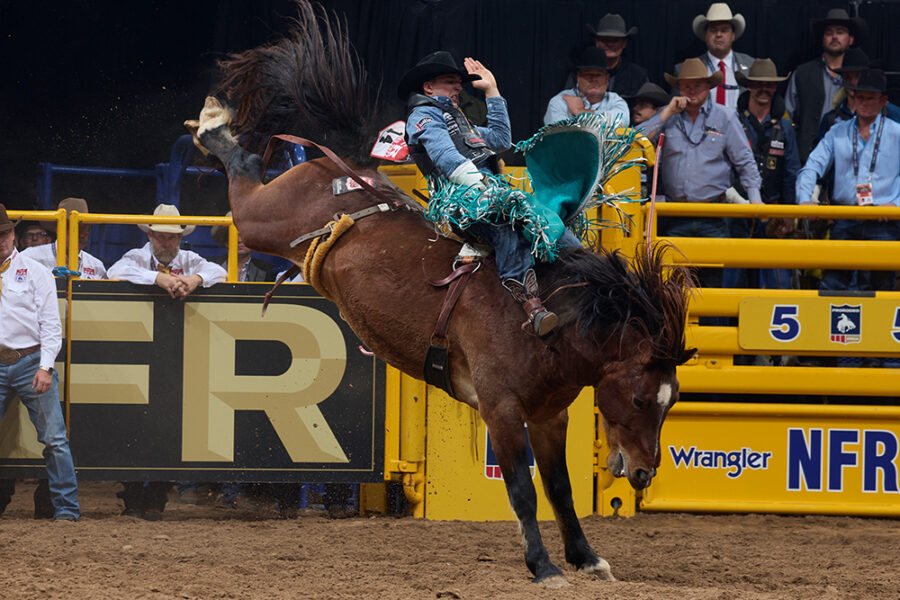 LAS VEGAS – A night after riding one of the rankest horses in rodeo to win the third round of the Wrangler National Finals Rodeo, Jess Pope got a bit of a break with Stace Smith Pro Rodeo’s Star Witness.

“At this stage and at this level, everyone is supposed to ride those horses perfect,” said Pope, who rode the big bay for 85.5 points to finish in a four-way tie for fourth place Sunday night. “They are the easiest set of horses that we have here. Everyone is supposed to put that 24-point spur ride on them.”

Each judge marks the rider and the bronc 1-25, so a 24-point spur lick is nearly perfect.

“Then you’re splitting hairs from what horse was just a tick better than the other one to decide the winner,” he said. “I’m really thankful to be able to get some money in this round. I think this is the first time I’ve won a check in the first pen of hoppers.”

Pope has been in a battle for the top spot on the money list all season. He came into Las Vegas second, trailing Reiner by just a few hundred dollars. Everyone in the mix knew, though, that the Montana Silversmiths gold buckle was going to come down to this week and a half during ProRodeo’s grand championship.

“There are always a little bit of nerves when you get on any of these horses,” said Pope of Waverly, Kansas. “I am focused when I get in (the chute). I’m there to do my job. I’ve thought about it all day. I’ve pictured what I’m going to do. I’m telling myself exactly what I’m going to do when I go out there.

“I don’t really feel the nervousness when I sit on their backs, because at that point and time, it’s all supposed to be mind over matter. Your body is reacting at that point in time, not thinking about what the heck is fixing to happen.”

Pope’s mind matters, and he’s cashing in as much as he can.