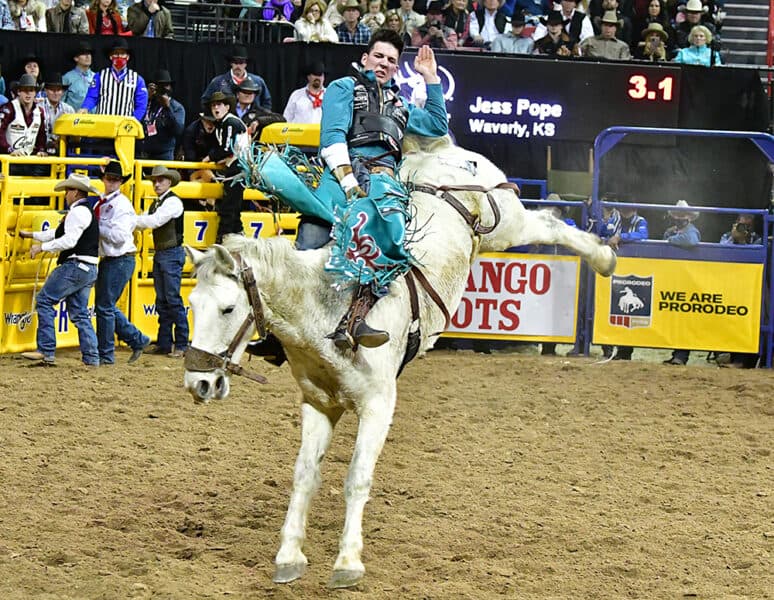 LAS VEGAS – Jess Pope had to get on two of the hardest-to-ride horses in the PRCA during Thursday’s eighth round.

His first, C5 Rodeo’s Black Eye, didn’t perform up to its typical style, so Pope was awarded a re-ride on Five Star Rodeo’s Deep Springs. The big gray also didn’t have a great trip, but Pope spurred the horse enough to score 83 points to finish sixth.

“I was glad to catch a check,” said Pope of Waverly, Kansas. “Money’s money, and we’re out here to try to take what you can get, try to take all of it you can. There are two more rounds, and I’m looking forward to it. We are going to forget about (Thursday) and all the irritating stuff in it and rock and roll tomorrow.”

He’s had an excellent NFR. He’s placed in all but one round so far and earned more than $130,000. He is second in the aggregate race with a cumulative score of 698 points on eight rides and trails the leader, Kaycee Feild, by just one point.

“There’s a lot of stuff that is out of my control,” he said. “All I know is that I showed up and did my job, and I got on two of them when everyone else got on one. It’s alright with me.

“It’s a fistfight when we come into it. It is a no-mercy kind of a deal; kill or be killed. This was our (‘Eliminator Pen’), so I knew coming in it was going to be a fistfight. I just got to do it twice. I like getting into fistfights with them.”

Pope is second in the world standings, and he’s working hard to move up to the top spot. His season earnings sit at $244,268, and he needs as much cash as possible to move past Feild, the standings leader and a five-time world champion.

“This is definitely the hardest thing there is on your body,” Pope said. “To tie to 10 or 11 of these (horses) in 10 days is super hard on you. You’ve got to be fit. You’ve got to be working on those muscles all week, trying to get them to loosen back up.

“My elbow is a little bit sore, but it will be good to go come tomorrow.”

He’s in great shape … both physically and in the race for the Montana Silversmiths gold buckle.