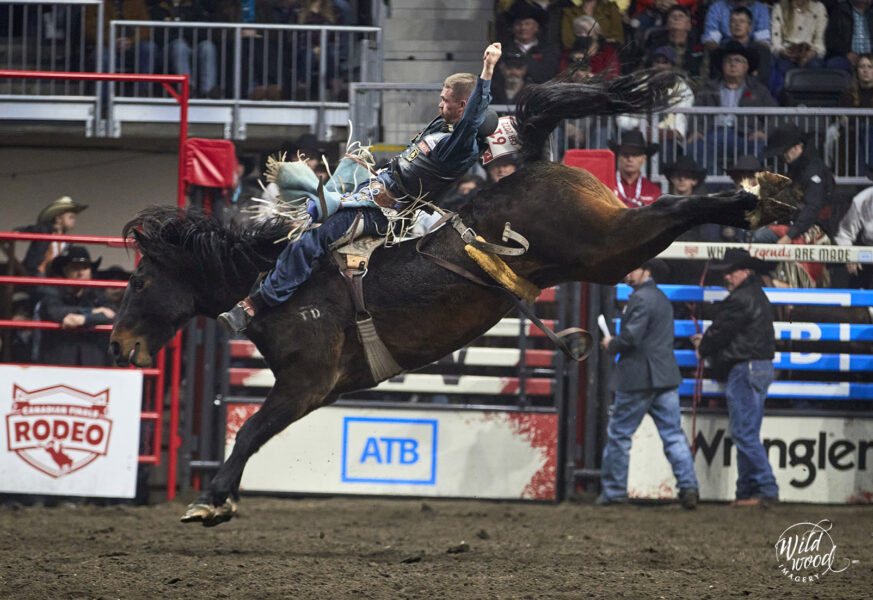 2019 Canadian Champion bareback rider, Orin Larsen, has a history of doing just that and he was at it again this time around. The Inglis, Manitoba-raised cowboy has either won or split the round in almost every Saturday matinee performance he’s performed at in six CFR qualifications. But this year was even sweeter as the 2019 Canadian Champion won both rounds November 5 in Red Deer. Larsen marked an outstanding 87 points on Calgary Stampede’s B-12 BigTimin Houston in round 4 then added an even more impressive 87.75 in round five on Big Stone Rodeo’s 48 Fired Up. When the dust settled, the CFR-NFR cowboy, who has placed in every round to date, pocketed $18.670 and moved to third in the aggregate. The lead remains in the hands of veteran Ty Taypotat, who is closely followed by Montana hand, Caleb Bennett with Larsen lurking in the shadows should either make even a small slip in Sunday afternoon’s final round.

The bull dogging has been no less dramatic, with two-time Canadian Champion and Season Leader, Scott Guenthner not enjoying the Finals he had hoped for. The Provost, Alberta talent has three round placings to his credit and sits second in the aggregate. Fort St John, BC’s Stephen Culling earned the fifth go-round win with a lightning-fast 3.7 second run to bring his Finals earnings to $17,474 with one performance to go. But Cochrane cowboy Tanner Milan has become the man to watch. The two-time Canadian Champion has won two rounds and placed in the other three for almost $23,000 in CFR earnings and first place in the all-important aggregate. He trails Guenthner by $10,000 and needs to have a huge Sunday performance and Guenthner to stumble to allow Milan to complete the come-from-behind win.

Slow and steady may win the race when it comes to the ladies barrel racing event. Yellowhead County, Alberta barrel racer Taylor Manning has been the model of consistency at this year’s Finals. The five-time CFR qualifier holds down the lead with one go-round win and four placings – including two second-place finishes on Saturday. Added to the 18-year old’s outstanding performance is the number one beside her name in the aggregate standings. 2022 Season Leader and Rookie of the Year, Bayleigh Choate has slipped to second overall and fifth in the average – despite a hair-straight-back matinee run that saw the Texan clock a 13.92 while reaching down and righting first barrel along the way. Unfortunately for Choate her luck ran out Saturday night as this time the barrel went down, opening the door for Manning. Also on the watch list heading into the final performance is Shelby Spielman and her Horse of the Year, Hot Donna, who is just $2800 back of Manning and is third in the aggregate.

Another event that will come down to the wire on Championship Sunday is the tie-down roping. Texas cowboy, Ty Harris, who is making his second CFR appearance, had his best performance of the week in round five with an impressive 7.8 second run. The three-time NFR qualifier is second overall – just $1800 behind CFR Rookie Beau Cooper. But Harris is fourth in the aggregate while Cooper has slipped to eighth. Also in contention are Carstairs, AB cowboy Kyle Lucas, Saskatchewan hand, Jesse Popescul and Season Leader Clayton Smith. 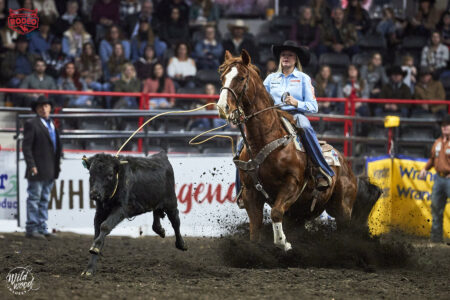 In only the second year as an official CPRA event, breakaway roping has taken women’s rodeo by storm. With twelve women vying for the title, the closest race is between Longview, Alberta’s Bradi Whiteside who earned the matinee round win and second spot Saturday night and defending Champion, Kendal Pierson from Wardlow, Alberta. Whiteside is in the driver’s seat heading into round six with $24,347 in winnings and first place in the aggregate. Pierson is within striking distance but needs a solid final day.

Alberta team ropers, Clint Buhler and Brett McCarroll waited until CFR Saturday to move onto the leaderboard. The veterans scored two round-wins with 4.2 and 5.4 second times – good for $18.671 each and a move to first in the aggregate. McCarroll, a two-time champion, roped his 100thCFR steer on Saturday afternoon and 101stin the evening performance with both runs resulting in first place cheques. But season leaders, Dawson and Dillon Graham, remain in control as comfortable overall leaders heading into round six.

The classic event of rodeo – the saddle bronc riding – continues to see big scores and amazing rides. On a two-performance day that saw seventeen scores in the eighties, the most notable move was made by two time World and Canadian Champion Zeke Thurston from Big Valley, Alberta. After finishing out of the money on Saturday afternoon, the defending champion rode Calgary Stampede’s R-62 Redon Acres to a spectacular 88.75 score in the evening performance – good for first place money in the round. The win consolidated Thurston’s hold on top spot overall and the aggregate standings heading into Sunday. Not far behind the second-generation superstar are Layton Green and Kole Ashbacher.

When CFR ’48 kicked off back on Wednesday the consensus was that runaway season leader, Jared Parsonage, was a virtual lock for the bull riding title. But after four go-rounds, the race had become much tighter – courtesy of outstanding performances by Camrose bull rider Coy Robbins and 2016 Canadian Champion, Jordan Hansen. And when Robbins rode his bull Saturday night to be four for five and take over top spot in the aggregate, the noose was getting a little tighter on the reigning champion. But Parsonage made a critical ride on the Kesler bull, Perlich Brothers Ivy League to grab a third-place finish in the round. Heading into Sunday, the Maple Creek talent can breathe a little easier with a $17,000 lead over Robbins while sitting third in the lucrative aggregate.

Sunday’s final round will get underway at noon at the Peavey Mart Centruim in Red Deer.

The Canadian Professional Rodeo Association(CPRA) with headquarters in Airdrie, Alberta is the official sanctioning body for Professional Rodeo in Canada. The CPRA approves 55 events annually with a total payout exceeding $5.7 million. The organization oversees the SMS Equipment Pro Tour Finals each fall in Armstrong, BC, holds their premiere event – the Canadian Finals Rodeo (CFR) – at Westerner Park in Red Deer, AB November 2-6 and endorses the Maple Leaf Circuit Finals as part of Canadian Western Agribition in Regina, SK. Follow the CPRA on Twitter and Instagram @prorodeocanadaofficial, ‘Like’Canadian Professional Rodeo Association on Facebook or online at RodeoCanada.com.