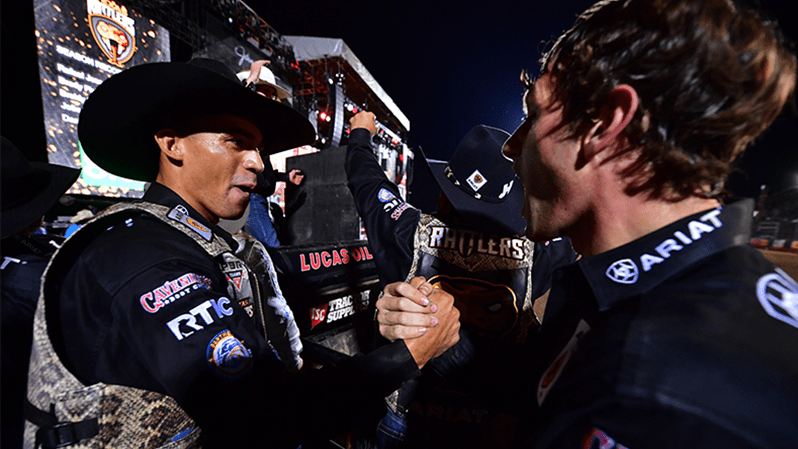 As the second night of competition got underway, the Rattlers opened up the game with Rafael Jose De Brito (Potirendaba, Brazil), who came down in 3.88 seconds while attempting to ride Slim Shady (Hadley Cattle Co/Stone Bucking Bulls).

Meanwhile, the first nod from the Outlaws came from Dalton Kasel (Muleshoe, Texas) aboard Perch Trap (Blake Sharp/Henry Wilson). Kasel was unable to register a score, bucked off in 6.4 seconds.

Down a bull, the Outlaws needed to find a qualified ride. Marcus Mast (Middlebury, Indiana) gave everything he could while matched with Gold Chain (Young Cattle Co), but got hung up and flung off at 6.93 seconds.

After a scoreless third frame, Rattlers’ Head Coach Cody Lambert appointed Joao Ricardo Vieira (Itatinga, Brazil) to get the team ahead by two bulls. Vieira, bucked off six of his last seven bulls, could not reverse his luck, coming down in 3.91 seconds after the bull turned back to the right.

The next out belonged to the scoreless Outlaws. Aboard Bestex Solutions Red Clark (Blake Sharp/Chris Utz/Garrett Carey), Kyler Oliver (Roy, Utah) was brought down in 2.98 seconds. Outlaws’ Head Coach J.W. Hart considered a possible foul and pressed the challenge button for official review, but the judges ruled no foul and no score.

As the Rattlers looked for their last opportunity to build their lead, Daniel Keeping (Gorman, Texas) continued to show up for his team for the second night in a row, as he put up 90 points on Show Me Homie (Jo-Z Bucking Bulls/K-C/Spark-lin Acres). Now two bulls ahead at 179.50-0, young Keeping’s career-highlight ride would earn the Texas Rattlers the win.

With the victory already clinched, the Outlaws attempted to avoid a shutout with Bob Mitchell (Steelville, Missouri) attempting to ride Ninja Cowboy (Universal Pro Rodeo), but he was bucked off at a hard-fought 7.15 seconds.

With the victory against the Kansas City Outlaws, the Texas Rattlers improved to 9-12, and they will look to continue their winning streak on Sunday against the Nashville Stampede (5-15-1).