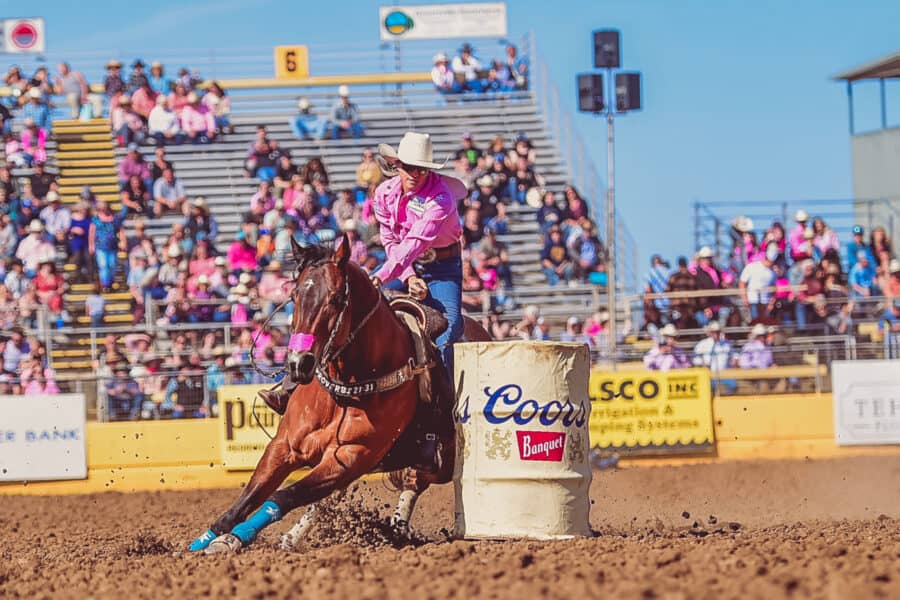 It was the second time for barrel racer Stevi Hillman to win a Red Bluff title. The Weatherford, Texas cowgirl rounded the barrels in 17.10 seconds in the finals to win the barrel racing in Red Bluff. Photo by Crystal Amen.

Red Bluff, Calif. – The eyes of the rodeo world were on Red Bluff this past weekend, with the 101st Red Bluff Round-Up taking place April 15-17.

Nine pro rodeo cowboys and cowgirls added to their world rankings and padded their bank accounts with gold-buckle wins and first place finishes in Red Bluff.

Among those crowned as a 2022 Round-Up champion is an Oregon cowboy. Dalton Massey, Hermiston, turfed four steers in 19.8 seconds to win the gold buckle.

Massey didn’t have a great start to his Round-Up week, but it got better. In the first round, he had a time of six seconds, which wasn’t fast enough to win a check.

“Shoot, I told my dad (Kurt) I was going to get faster every day, and I’d be in contention come Sunday (for the finals.) I drew good enough and that’s exactly what happened.” His times got progressively faster, going from six seconds to 4.8 seconds in the second round, 4.4 in the third round, and 3.7 in Sunday’s round to win the title.

This is the fourth time for the Oregon cowboy to compete in Red Bluff. The past three years, he’s broken the barrier during one of his runs, adding ten seconds to his time and effectively taking him out of the winnings. “This year, my goal was to get out at the barrier at every steer, and have a chance come Sunday.”

Massey rode a borrowed horse, a mare named Sassy who is owned by fellow steer wrestler Mike McGinn. She’s been his mount all winter. McGinn and another steer wrestler, Justin Kimsey, also rode the mare in Red Bluff.

A win of over $7400 will help him get down the road, paying for fuel and entry fees, and hopefully be momentum enough to get him towards his first Wrangler National Finals Rodeo qualification, after finishing nineteenth in the world last year.

The Red Bluff Round-Up is a favorite rodeo for the 2022 Round-Up barrel racing champion’s horse.

In fact, the same duo: Stevi Hillman and her mount Truck, won the rodeo twice: this year, and in 2017.

Truck, whose registered name is Cuatro Fame, carried his rider for a time of 34.42 seconds in two runs for the win.

“Truck loves Red Bluff, and so do I,” she said. “It’s one of our favorite rodeos. We’re outside, the sun is shining, and it’s Easter. I just couldn’t be any more thankful today.”

Hillman has ridden the fifteen-year-old big bay gelding for the last seven years and has owned him for two of those years.

“I helped Taylor carry her Yeti cooler back to the trailer in 2016, and the next year, she helped me carry it. She’s not here, but, Taylor, I’m thinking about you,” she said.

The winners each win a Yeti trailer, plus gold buckles and prize money.

In the tie-down roping, a Kansas-turned-Texas roper won the Red Bluff title. 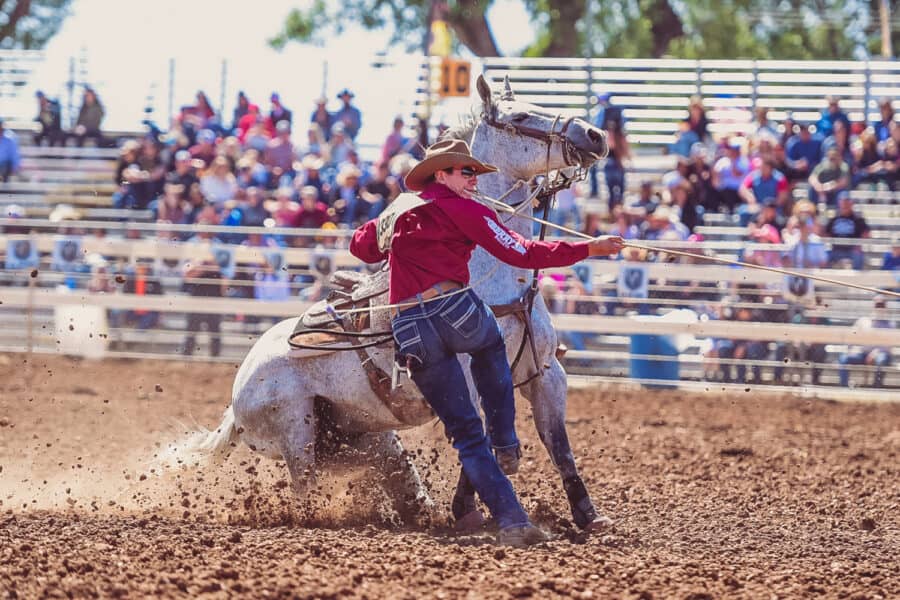 Cooper Martin, a native of Alma, Kan. but now residing in Salado, Texas, was reserve tie-down Round-Up champ in 2018 but this year took the top honor with a time of 41.7 seconds on four runs.

A three-time National Finals qualifier, he’s coming off an injury that sidelined him for six months last year.

He tore ligaments in his wrist, but the two surgeries to repair it caused carpal tunnel syndrome, which made his recovery time even slower.

But the time off was a blessing.

“I learned a lot about myself,” he said. “I’d never been able to be in the gym that much. We’re always driving and sleeping, and driving some more and sleeping some more, and when you have time off (while on the road), you don’t feel like doing anything else.”

He competed in Logandale, Nev. last week and will rope in Clovis, Calif. this week, before heading home.

“I’ve always liked to rodeo” in California, he said. “These four-head rodeos are good to me. They fit my style.”

He rides a gray gelding named Gru (from the movie Despicable Me), who is an excellent tie-down horse. “He’s consistent, and consistency is the key. If he’s consistent, I’m consistent. I’ve sure been blessed to have him. He’s had a huge impact on my career.”

For more information on the rodeo, visit RedBluffRoundup.com.