Oklahoma cowboy announces the St. Paul Rodeo, is an advocate for the town 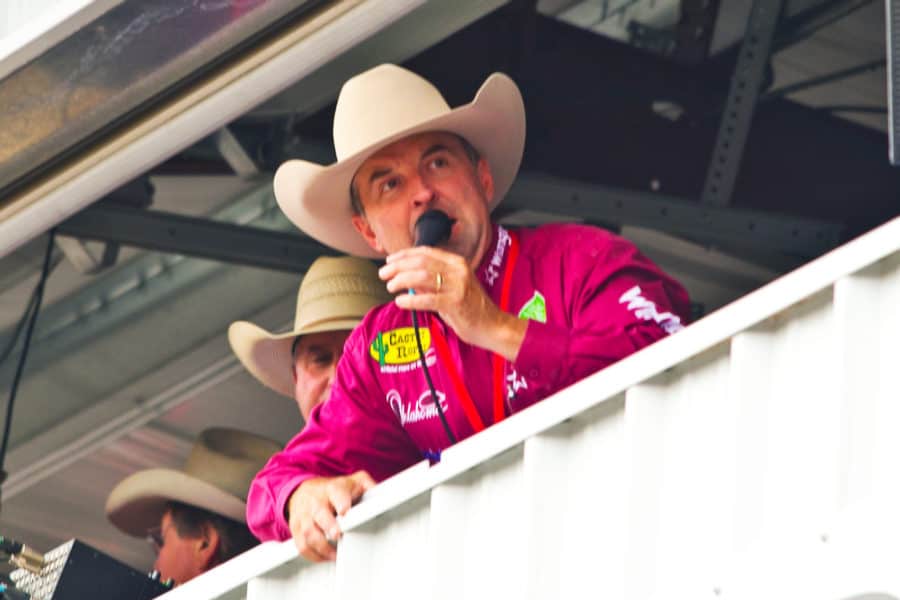 Oklahoma native Justin McKee leans out of the announcer’s stand as he calls the action at the St. Paul Rodeo. McKee, who has announced the rodeo for about two decades, loves the little town and all it and the rodeo stand for. Photo by Hoot Creek.

St. Paul, Ore. – There’s an Okie native who loves Oregon nearly as much as he loves his home state.

Justin McKee has been in love with St. Paul and the St. Paul Rodeo for the nearly 20 years he’s come to town to announce the Nation’s Greatest 4th of July rodeo.

The 52-year-old rodeo announcer, a former TV announcer for the PBR and now host of a rodeo show on The Cowboy Channel, loves St. Paul because it reminds him of his hometown of Lenapah, Oklahoma, where he and his family lived until a year ago, when they moved to Texas.

But when he comes to the Northwest to help celebrate the St. Paul Rodeo, he’s an Oregonian and the biggest cheerleader St. Paul has.

McKee is well-known for his colorful commentary, what St. Paul Rodeo goers call “McKee-isms”: sayings like “as gritty as sand in your scrambled eggs”; “bucked off faster than the banker could tell me no”; “spinning like a weathervane in a hurricane”; and other comparisons.

He developed many of them while on TV as a PBR commentator. In rodeo, he had a different crowd every night, but on TV, it was often the same viewers every night. “When you’re on TV every week, you have to come up with new stuff,” McKee said. “That’s when I went stealing, creating, looking and always thinking” of new and different sayings.

He and his wife Jeannie are the parents of a 21-year-old daughter, Kassidy, who is the apple of her daddy’s eye. She’s a barrel racer, like her mother, and also served as the 2016 Miss Rodeo Oklahoma Teen.

McKee’s day job is as fulltime host for The Cowboy Channel, official network of the PRCA. He is producer of a show called ProRodeo Tonight, and it’s given him a platform to tell the stories of cowboys and cowgirls, to “paint pictures” in minds, he said.

During every performance of the rodeo, the St. Paul High School Booster Club delivers a serving of strawberry shortcake to the announcer’s stand, for McKee to eat while he’s announcing.

“There’s an atmosphere of love of country and community that are important in St. Paul. There’s a great spirit, and maybe it’s the rodeo and the tradition. It’s a fun spirit.”