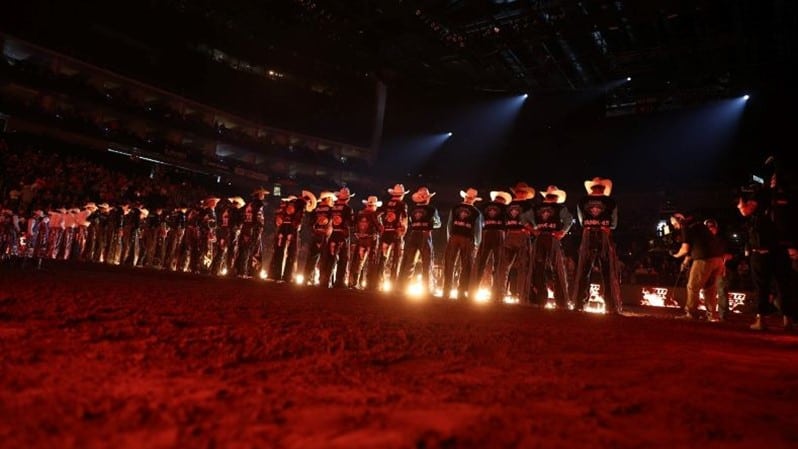 PUEBLO, Colo. – Anaheim may be a neutral site PBR Team Series event this weekend at the Honda Center, but don’t be surprised to see the California crowd cheer on its neighboring state’s bull riding team.

The Arizona Ridge Riders call Gila River Arena home in Glendale, Arizona, which is 6 hours away, and the Ridge Riders will be rolling into the west coast with plenty of reasons to convince Californians that their favorite team should very well be the Ridge Riders.

The Ridge Riders enter Anaheim riding a three-game win streak and will look to build off its impressive win at Outlaw Days last weekend in Kansas City, Missouri, during a marquee matchup on Friday night against the Missouri Thunder.

Arizona and Missouri are the only two squads to begin the PBR Teams competition with 4-1 records, while the winner on Friday night (10:45 p.m. ET RidePass on Pluto TV) will take over sole possession of first place in the PBR Team Series standings.

The Ridge Riders posted a season-high 311 points, riding four of its five bulls, in its Outlaw Days-clinching victory over Nashville last Sunday.

Here is a brief breakdown of the top two teams in the PBR.


CAROLINA RIDER TO WATCH: Daylon Swearingen is sitting second in the MVP standings with his 5-for-6 start to the season. The 2022 PBR World Champion has yet to buck off two consecutive bulls in Teams competition. Last week, coach Jerome Davis opted to use Mason Taylor in the Bonus Round in part to keep Swearingen fresh for the grueling season, while also showing trust in Taylor. Following Anaheim, the final seven regular-season events will all be three-day events.

KANSAS CITY RIDER TO WATCH: Dalton Rudman is not in the starting lineup for Kansas City, but the recent free agent signing could certainly have his name called at some point this weekend. It is no secret the Outlaws are battered and bruised right now. The team’s top two draft picks are out because of injuries and KC’s Round 3 pick Rafael Henrique dos Santos is banged up as well. It won’t be an excuse if you ask J.W. Hart, and his team proved during its last game they can overcome adversity. Yes, the Outlaws lost to Missouri, but they rode four of their five bulls in their best showing of the season to date.

Cody Jesus (TR) vs. Show Me The Fire Man
Derek Kolbaba (OF) vs. Navajo Joe
Rafael Jose de Brito (TR) vs. Gold Chain
Deklan Garland (OF) vs. Cold Creek
Ednei Caminhas (TR) vs. Sam I Am
Dawson Branton (OF) vs. Crack The Latch
Brady Fielder (TR) vs. Lone Star
Matt Triplett (OF) vs. Red Bones
Brady Oleson (TR) vs. Wild Goose
Casey Roberts (OF) vs. Not Today


TEXAS RIDER TO WATCH: Cody Jesus quietly was the only rider in the league to go a perfect 3-for-3 last weekend in Kansas City. Jesus could be heating up at just the right time for the Rattlers as Texas tries to get the train going in the right direction and climb out of the league basement. Texas is tied with Oklahoma and Kansas City for the worst record in PBR Teams.

OKLAHOMA RIDER TO WATCH: Matt Triplett is set to make his debut for the Freedom after originally being a member of the Nashville Stampede. Triplett is an eight-time PBR World Finals qualifier and will be a good veteran presence for Oklahoma with two-time World Champion Jess Lockwood, Chase Outlaw and Eli Vastbinder unavailable.

AUSTIN RIDER TO WATCH: Was last Sunday a turning point for Austin Richardson? The talented 22-year-old, second-round draft pick struggled out of the gate for the Gamblers (0-for-3), so coach Michael Gaffney decided to bench Richardson at the start of Austin’s game vs. Texas. However, Gaffney quickly went back to Richardson when Conner Halverson was awarded a re-ride. Richardson stepped up in a major way, riding Cold Shot for 88 points to cement the victory for the Gamblers.

NASHVILLE RIDER TO WATCH: Manoelito de Souza is set to make his Teams debut for Nashville following some visa issues that delayed his return to the United States from Brazil. Souza surprisingly fell to the fourth round of the 2022 PBR Team Series Draft despite finishing a career-best 20th in the 2022 world standings. Souza also set a career-high with 15 qualified rides.


ARIZONA RIDER TO WATCH: Paulo Lima looks to be the next rider to get a chance to earn a spot in the middle of the Ridge Riders lineup. Arizona coaches Colby Yates and Paulo Crimber have found their leadoff rider (Alisson de Souza) and finisher (Luciano de Castro), but they are still trying to determine the best middle three riders for its lineup. Through two weeks, Arizona appears to be taking a committee-based approach to the three spots. Souza (5 rides) and Castro (3) have accounted for eight of Arizona’s 12 rides this season. The rest of the team is 4-for-14 (28.57%) in five games. Lima went 0-for-1 in Cheyenne.

MISSOURI RIDER TO WATCH: Adriano Salgado was a popular name among opposing coaches last weekend in Kansas City as Salgado was one of the top practice squad riders on any roster. There was a chance Salgado was going to be poached to another team, but Missouri coaches Ross Coleman and Luke Snyder quickly shut that down by promoting Salgado to Missouri’s protected roster. (Note: Opposing teams cannot sign players off another team’s protected rosters. Practice squad riders can be signed.)