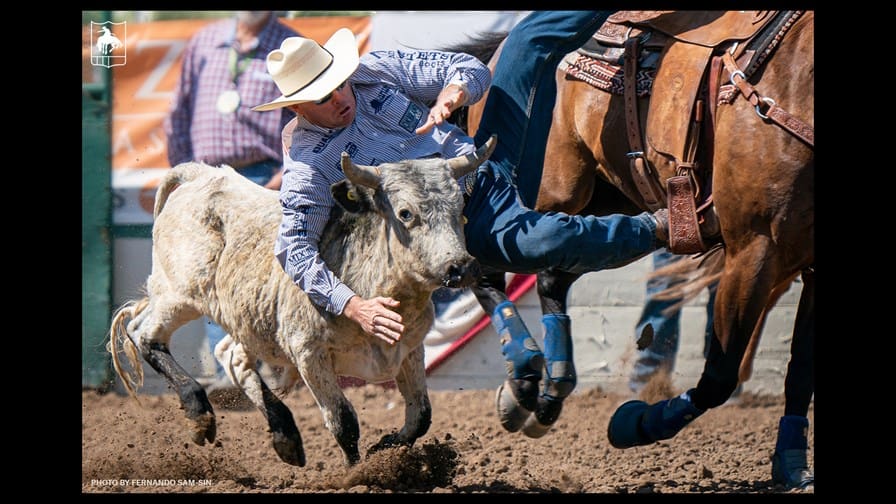 RENO, Nev. – Hunter Cure and the Reno Rodeo are a great fit.

The Holliday, Texas cowboy won the prestigious rodeo for the fourth time in his career before a sold-out crowd of 9,000 at the Reno Rodeo arena Saturday night.

Cure won the average with a 13.1-second time on three head in the ProRodeo Tour stop.

Cure, a PRCA World Champion in 2013 and 2015, has had a tough season, battling injuries all year long but he was all smiles Saturday night as he left town after earning $12,025.

“More than anything headed into the final round I knew that steer was great in the earlier rounds,” Cure said. “Tyler Pearson had a run with him first, mine wasn’t as clean of run as his by any means. He did a phenomenal job all week long, I just had a better steer tonight than he did.”

Coming into Reno, Cure was sitting 47th in the PRCA | RAM World Standings with $8,279. The Reno win added to the $2,745 he earned for splitting second at the Rodeo of the Ozarks in Springdale, Ark., which also concluded June 26, made it a $15,625 windfall for Cure.

“This (Reno win) has taken me from not even being able to get into the winter rodeos all the way to winning a gold buckle before,” Cure said. “So, I’ll look to try to and repeat what’s already been laid out ahead of me.”

Cure will be a busy man over the next couple of weeks, starting with the Greeley (Colo.) Stampede on Monday morning, but he says the performance at the Reno Rodeo will be one he remembers for quite some time.

“I feel like if a man was ever to leave a legacy or have a rodeo define his career it’s probably Reno for me,” Cure said. “Maybe this will put my stamp in the books here.”

Now, the superstar has decided to make his mark in the PRCA.

Mauney left his stamp on the PRCA by winning the Reno Rodeo for the first time in his career Saturday night.

“This is a big accomplishment,” said Mauney, 34. “I grew up watching Reno, and the NFR and Cheyenne and when I decided the first of this year, I was just going to strictly rodeo I wanted to come to the big ones and do good. This feels really good.”

Mauney, who was making his first appearance at the Reno Rodeo since 2009, had an 87-point ride on Bridwell Pro Rodeo’s C smoke in the short round.

“I had never seen that bull before and I didn’t know anything about him,” Mauney said. “They said he was good. That is all I knew. I do way better shooting from the hip.”

Mauney earned $20,920 for his Reno performance. He entered Reno 14th in the world standings with $35,713 and will move up near the top five after this effort.

After winning RFD-TV’s The American in March in Arlington, Texas and added a Reno win Saturday. Hooper won the average with 254.5 points on three head.

Hooper, who came into the short round as the leader, clinched the crown with his 84-point ride on Bridwell Pro Rodeo’s Ted. It was his second career Reno win.

“It was 2011 when I won it the first time and just to be able to be riding and competing at this level, I really feel thankful to do what I love.”

Hooper, who had dropped to second in the most recent world standings after holding the top spot for weeks, will move back into first with his $14,080 in Reno earnings.

On June 26, they walked away as the champions of the prestigious rodeo for their first time in their careers with a 16.5-second time on three head.

“We just got together,” said Begay, an eight-time Wrangler National Finals Rodeo qualifier (2008-13, 2015, 2018). “Our first rodeo together was in Pleasant, Grove, Utah (June 16-19) and Reno was our fourth rodeo together. We picked a nice one to be our first win (together). This is a big accomplishment.”

Begay, entered Reno 18th in the PRCA | RAM World Standings with $14,972, and will jump into the top 15. Petska, the 2017 PRCA World Champion heeler, competes on a limited basis and was thrilled to add the Reno win to his impressive resume.

“I won second three times here in over 20 years,” Petska said. “This (win) is really special, a dream come true. I have come here since I was a little kid watching my mom and dad and it is just amazing to win it. My career has been absolutely amazing. I have literally got to do everything I wanted to do, and I have won all the big dream rodeos, and my career has been amazing. This win seals the deal for me.”

Saddle bronc rider Tegan Smith is a rising star in the PRCA ranks and he showed why Saturday night.

Smith snared the coveted Reno Rodeo championship with 254.5 points on three head. He secured the crown with an 86-point ride on Rosser Rodeo’s California Dreamin.

“I knew that horse because my traveling partner Jake Finlay was 87 on her earlier this year and he told me she was the best feeling horse,” Smith said. “I waited all week to come back, knowing I needed that draw and it worked like a charm for me.”

The Winterset, Iowa cowboy came to Reno 13th in the world standings and will certainly move up the ladder after his big win where he earned $10,495.

Smith is trying to make the Wrangler NFR for the first time in his career.

The Leesville, La., cowboy finished 17th and 18th in the world standings the past two seasons.

Smith took a big step to reaching the NFR Saturday night by winning the Reno Rodeo with a 26.7-second time on three head. He earned $13,484.

“This is the third time I have been to Reno, and I made the short round in 2019 and ended up breaking the barrier,” Smith said. “Tonight, I was just glad to get these spurs. This is definitely the biggest win of my career, and it couldn’t come at a better time starting off the summer and getting things rolling.”