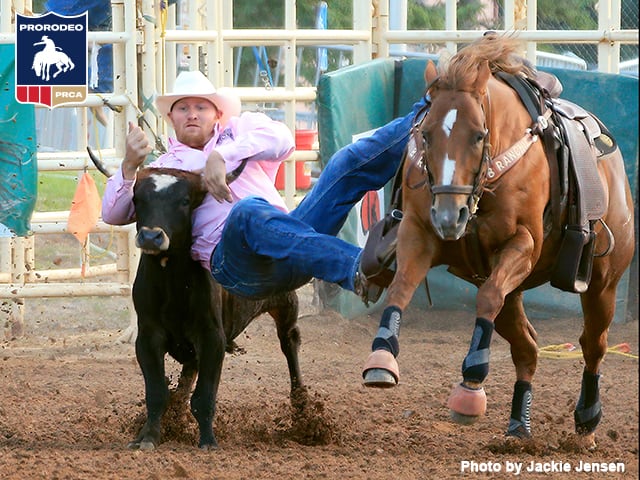 On National Day of the Cowboy, steer wrestler Stetson Jorgensen won the 98th annual Deadwood (S.D.) Days of ’76 Rodeo and split the win at Nebraska’s Big Rodeo in Burwell, July 25.

“It feels great,” Jorgensen said. “I’ve got momentum going my way, will roll on it next week and keep it going. It was a really good weekend, so I’m just going to keep a smile on my face.”

The Idaho cowboy won round 2 at Deadwood last year with a 3.9-second run but was out of the average. The 2020 Deadwood rodeo was a different ballgame for Jorgensen, 27. Jorgensen registered 4.1- and 4.2-second runs, respectively, to place fifth in round 1 but out of the money for round 2.

Those runs combined for a 0.6-second lead in the average with 8.3 seconds on two head and a $4,949 check in Deadwood.

“This year, with not as many rodeos going on, it was a bit tougher,” Jorgensen said. “You’ve got to draw well, do your part and have good horses.”

Both of Jorgensen’s wins came aboard Mabel, who placed third in the 2019 Purina Horse of the Year presented by AQHA award for steer wrestling. The 9-year-old, sorrel mare is owned by Garrett Henry of 88 Ranch Performance Horses in Douglas, Wyo., and has been Jorgensen’s equine ProRodeo partner for two years.

“It feels pretty awesome, words can’t describe it,” Jorgensen said. “I’m lucky to ride Mabel everywhere, and she’s a big part of it. She leaves so hard off the corner, runs all the way and always makes my job so easy.”

Fresh off their debut at the Wrangler National Finals Rodeo in 2019, Jorgensen and Mabel started off on the right foot for the 2020 season by winning the National Western Stock Show and Rodeo in Denver in January. They also won the RAM Wilderness Circuit Finals Rodeo in Heber City, Utah, in November.

Jorgensen is on track to make a repeat appearance at the NFR. Before his double-win weekend, Jorgensen was 12th in the PRCA | RAM World Standings with $26,217, less than $10,000 from breaking into the top five.

“I kind of had a cold Fourth of July, but got things rolling in Nephi (Utah), and now I have some momentum to finish the year strong,” Jorgensen said.

For more coverage of the Deadwood Days of ’76 Rodeo, check out the Aug. 7 edition of ProRodeo Sports News.