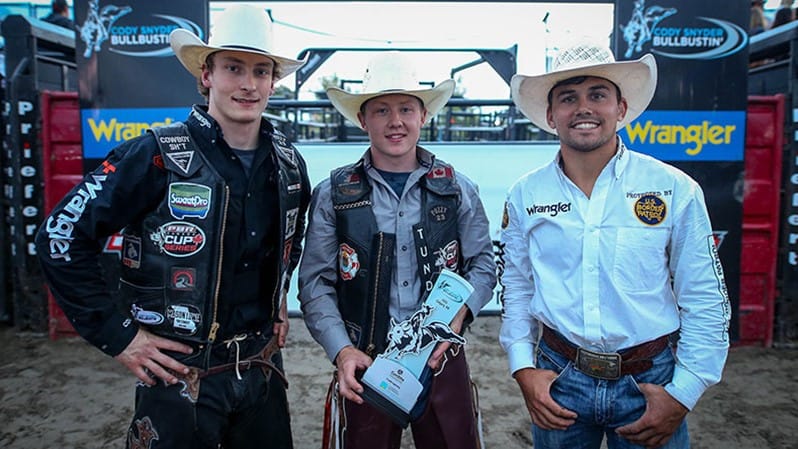 For the Carolina Cowboys’ Swearingen, he first put points on the board in Round 1 when he covered Sugar Jack (Outlaw Buckers Rodeo Corp.) for 82.5 points.

Positioned eighth on the event leaderboard entering the championship round, Swearingen next readied to go head-to-head with Phantom Fury (Wild Hoggs Bucking Bulls).

Swearingen was a picture of perfection atop the powerful animal athlete, matching him jump-for-jump en route to a monstrous 91-point score, the highest-marked ride of the season thus far in Canada.

For his victory, 2019 PBR Canada Champion Swearingen earned 19 national points, rising from No. 9 to No. 6 in the heated race to be crowned the 2022 PBR Canada Champion. He now trails No. 1 Blake Smith (Abbey, Saskatchewan) by 66 points.

Robbins and Sahli tied for the victory alongside Swearingen, each collecting 22 national points.

Atop the standings, while No. 1 Smith was blanked for the second consecutive event, bucked off by Mild to Wild (Outlaw Buckers Rodeo Corp.), No. 2 Lonnie West (Cadogan, Alberta) gained ground on his countryman compliments of a seventh-place finish.

West garnered 2.5 national points courtesy of his 85.5-point ride on Thor’s Hammer (Wild Hoggs Bucking Bulls) in Round 1. He now trails No. 1 Smith by a mere 22 points.

Going 2-for-2, Hansen rode Canadian Miracle (Wild Hoggs Bucking Bulls) for 85.5 points in Round 1, and PopEye (Outlaw Buckers Rodeo Corp.) for 86.5 points in the championship round.

Unranked prior to the event, Hansen is now ranked No. 24 in Canada as he seeks his career-first national title in PBR competition.

Rounding out the Top 5 in fifth was Roy.

As the final rider to be flawless in Calgary, Roy rode Broken Trigger (Skori Bucking Bulls) for 78.5 points in Round 1, before capping his efforts with an 84-point trip atop Socks (Outlaw Buckers Rodeo Corp.) in the final round.

Roy left the Grey Eagle Resort & Casino having earned 4 national points. He remained No.4 in the standings but climbed within 50 points of No. 1 Smith as he chases his unprecedented fourth national title this November in Edmonton, Alberta.

In the bull pen, Ted (Wild Hoggs/Corey Chmelnyk) bucked a cut above the rest. Crowned the Bull of the Event, Ted was scored an impressive 47 points for his 3.46-second trip with Keyshawn Whitehorse (McCracken Springs, Utah) in the final round.

The 2022 PBR Canada season will continue on July 7-8 in Calgary, Alberta, for the Cody Snyder Charity Bullbustin’. Action at Grey Eagle Resort & Casino will begin nightly at 7:00 p.m. MDT.