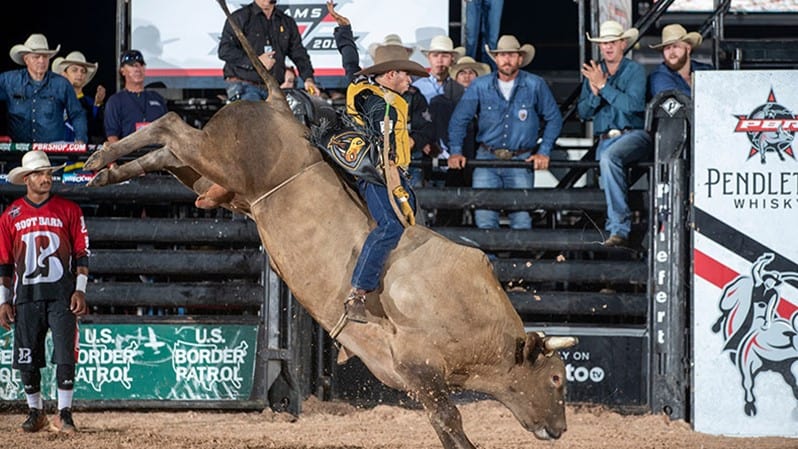 TRYON, N.C. – As the inaugural preseason for the PBR (Professional Bull Riders) Team Series continued in Tryon, North Carolina, at the Tryon Chute Out, the world’s best bull riders showed up and showed out in fiercely contended games all evening long. With the night’s competition headlined by a much-anticipated home-state debut for the Carolina Cowboys, the North Carolina-based outfit was unable to prevail, dealt the franchise’s first loss when they were shut out by the Oklahoma Freedom.

Elsewhere in the league, the Arizona Ridge Riders rebounded from a dismal showing in Bismarck, North Dakota, logging their first win in beating the Nashville Stampede. The Austin Gamblers remain on the hunt for their first victory, bested by the Missouri Thunder Friday night inside the Tryon International Equestrian Center. In the third game of the event, the Texas Rattlers beat the Kansas City Outlaws to earn the team’s second consecutive preseason win.

The PBR Tryon Chute Out Team Series Preseason Event continues Saturday, June 25 at 7 p.m. ET. Tickets are still available and can be purchased at ETix.com or Tryon.com or at the Tryon International Equestrian Center Box Office.

PBR RidePass on Pluto TV will offer re-airs and on-demand replays of all the action. PBR RidePass is available on desktops, laptops, and mobile devices via www.pluto.tv. Tune to channel 720 for the latest programming schedule.

With back-to-back qualified rides in their opening outs, the Texas Rattlers dealt the Kansas City Outlaws the contingent’s first loss, besting the Missouri outfit 174.5-84.75. Ednelio Almeida (Cacoal, Brazil) set an early tone, electric in his 88.25-point ride on Prayer Warrior (Halpain Bucking Bulls). Continuing the momentum, Rafael Jose de Brito (Potirendaba, Brazil) put the Texas Rattlers two scores ahead when he covered Betcha Boots (Halpain Bucking Bulls) for 86.25 points. With three riders left to compete for each team, buckoffs from both the Rattlers’ Ednei Caminhas (Indaiatuba, Brazil) and Kansas City’s Tate Pollmeier (Ft. Scott, Kansas) brought the game down to the Outlaws’ Marcus Mast’s (Middlebury, Indiana) showdown with 7 Up (Team Alaska). The Outlaws could not capitalize when Mast was bucked off in a swift 2.57 seconds, and the Texas Rattlers clinched the victory with outs remaining. Pollmeier, who competed twice for the Outlaws with Cole Melancon (Sour Lake, Texas) unable to compete due to travel delays, prevented a shutout when he covered Mic Drop (UTC/Sellers Bucking Bulls) for 84.75 points. But it was not enough, and the Rattlers earned the team’s second consecutive preseason win, 174.5-84.75. On the final day of competition in the preseason for the inaugural PBR Team Series, the Rattlers will ride against the Austin Gamblers, while the Kansas City Outlaws will look to right the ship against the Missouri Thunder.

“Joao Ricardo Vieira has always been the guy I wanted first, and he gets the victory tonight because he told me to draft those two guys that made the whistle,” said Texas Rattlers Head Coach Cody Lambert.