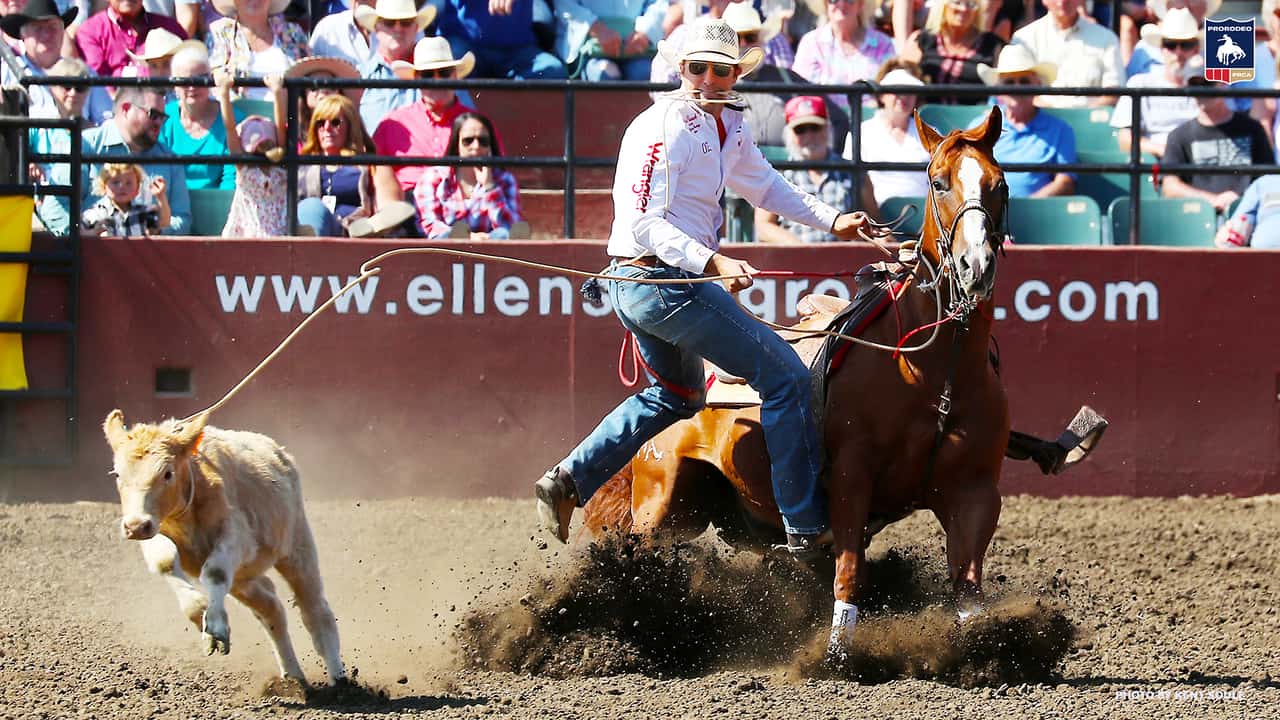 Tie-down roper Stetson Vest planned to head home to Childress, Texas, a few weeks ago. Instead, he spent Labor Day roping in the finals of the Ellensburg (Wash.) Rodeo, a tradition rich, lucrative rodeo.

Coming into the finals tied for the lead with John Douch, Vest roped tough, edging out Douch for the championship with 26.8 seconds on three head compared to Douch’s 27.4.

“Ellensburg is one of my top five favorite rodeos,” said Vest, 35. “I think third was the best I’d finished there before but this was my first time to win it.”

Vest constructed the victory with smart, solid roping through the week. He was 8.4 seconds on his first run, good enough for second in the round. A 9.1-second run earned another round check in the second round, this time for fifth. In the finals, he stopped the clock in 9.3 seconds to win third.

“I was splitting with John Douch, and I roped ahead of him,” Vest said. “The third high guy went long, and I knew I had just kind of an average calf, so I just went and made a good, solid run. John’s calf was a little stronger, so he was a bit longer and I got the win.”

“I’d planned on going home after Caldwell, (Idaho), but I kept clipping along, making the short-go at rodeos,” Vest said. “Now, I’ve got a shot at going to Salinas . . . this win really helped a lot.”

Vest enjoys the Northwest rodeos not only for the proximity to each other and much cooler temps than Texas but also the fact the longer scores and bigger calves suit his and his horse’s style.

“My horse can really run so places like Ellensburg are my setup,” Vest said. “Nitro seems to come alive in the Northwest; it’s just his deal and he always seems ready after rodeoing all year.”

Likewise, Salinas is known for long scores so it’s one Vest is relishing the chance to enter this year.

Vest will stay north, “easing” around with his family in tow through the Pendleton (Ore.) Round-Up in two weeks. His wife Chenae and daughter Stetlee, 2, have kept him company on the road.

“She’s a trooper,” Vest said of hauling with Stetlee. “She’s been introduced to carnivals this summer so there hasn’t been anywhere I’ve roped that I didn’t have to go get on some ride afterwards.”

Two arena records fell during the Ellensburg Rodeo. In the second round of steer wrestling, Will Lummus turfed his steer in 3.3 seconds to beat the previous mark of 3.4 that was held by four cowboys.

In barrel racing, Jordon Briggs toppled Nellie Miller’s average record of 51.48 seconds when she won the rodeo in 51.37 seconds on three runs.